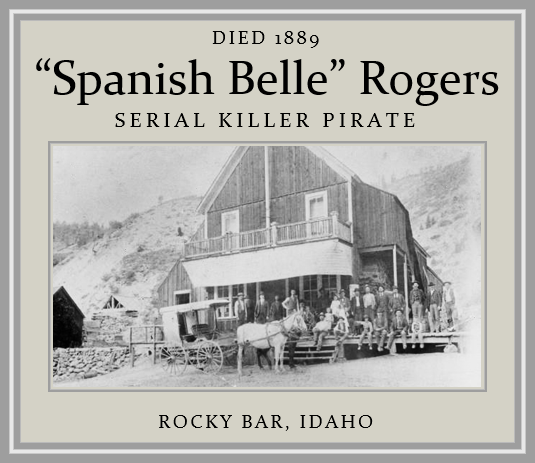 FULL TEXT: The Elmore Bulletin, published at Rocky Bar. Idaho, announces the death of "Spanish Belle," one of the most desperate women who ever lived on this coast. She resided In Eureka about six or seven years ago. When she stabbed "her man" in 1804 in Idaho City in a dance house one night, her victim walked out of the building and fell dead in the street it is reported of her that she asked that a light be brought that she might make an examination and satisfy herself that be had breathed his last remarking immediately after it was ascertained that he was dead, that if not she proposed to finish the work. The Bulletin gives the following brief history of her:

A woman known all over the Pacific coast as ' Spanish Belle," or "Belle Rogers," died in this place last Sunday-morning, aged 87 years. There is scarcely a mining camp on the coast that this woman did not visit during its prosperity since the days of 1849. Her history, if correctly told would doubtless fill a large volume—and it would be a volume of bad deeds only, for no good deeds have ever been attributed to her, in the knowledge of those few who have known her history for the past forty years. It seems that she gloried in the crimes she had committed, and during her convivial moments would relate some Incidents of her past life. At an early age, in her native land of Central America, she became the mistress of a noted sea pirate named Valzaj, whose vessel was a terror to the merchant ships plying the waters of the Pacific Ocean. She boasted that her duty was, when this pirate ship anchored at a port of prominence, to decoy rich men aboard the vessel, where they would surely be murdered and robbed. She followed this criminal career until the discovery of gold In California, when she left her pirate paramour clandestinely and landed in San Francisco in the summer of 1849. She soon drifted to the gold mines and followed every excitement from that date to the time of her death, plying her nefarious calling and a terror in the community in which she happened to cast her lot it is said "Spanish Belle" boasted of having murdered four men hers. If alone for money i one in Idaho), and two women of her own character, who were so unfortunate as to excite her jealousy. It is claimed that she was buried with a finger ring that belonged to one of her unfortunate victims. The men whom she had cut almost unto death in Boise Basin, Atlanta, Rocky Bar, Idaho. Eureka and Virginia City, Nevada, are entirely too numerous to mention Yet In the long career of crime this woman, by her devilish cunning, man-aged to escape just punishment by law. In her young days she was doubtless a hand-some woman, and at her death did not look to be over 60 years of age. She was quietly buried Sunday evening about 7 o'clock, with but one solitary person following her remains to the grave.