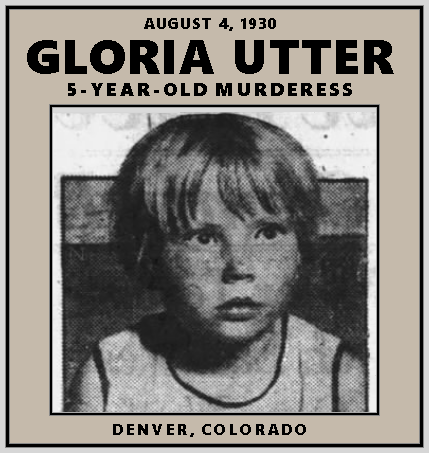 Although some reports give Gloria Utter’s age as 3 and some as 5, the photos make it clear that she was at least 5 years of age.

FULL TEXT: Denver, Aug. 4. – Six-year-old Rose May Etheridge was dead here today, slain by a three-year-old playmate during a quarrel over a rag doll.

“Rose May stole my rag doll – so I shot her,” was the simple explanation of the slaying given by tiny Gloria Utter.

Authorities were perplexed over disposition of the case. A Colorado statue sets the age of 10 years as the minimum for punishment of such a crime.

The tragedy occurred in the backyard of a home near Denver. Rose May, Gloria, and two other little girls were playing. Suddenly they quarreled. Gloria ran to a nearby garage, seized a .22 caliber rifle, hastened back to her playmates and shot Rose May.

FULL TEXT: Aug. 19. – Aid of Denver psychiatrists will probably be enlisted to straighten out the tangled sense of right and wrong of Gloria inter, Colorado’s five-year- old "elf” slayer.

The tiny miss created a profound social problem in Colorado recently when she shot and killed her six-year-old playmate, Rose May Ethridge, at Logantown, a suburb of Denver.

“She stole my rag doll — so 1. killed her.” This was the frank; confession that the child gave Logantown officials when they questioned her concerning her act – which left her as unmoved as the^ most seasoned Chicago gunman.

Joe E. Stone, district attorney of the Logantown district, refused to take any steps to punish the' child, with the exception of urging| her parents to place her in the state psychopathic hospital, where she might be observed and perhaps L- have some fundamental sense of social obligation established in her mind. Officials are of the belief that "with the brand of Cain upon her brow, her punishment in later years will be greater than any which the law might inflict.”

Stone is powerless to have the girl placed in the psychopathic hospital against her parents’ wishes as such action would necessitate a court declaring her so incorrigible that she would be a state dependent. Gloria found the .22 calibre rifle with which she murdered her playmate in her father’s garage. As a result, the girl’s father, Rovelle Utter, has been the target for a volley of criticism for leaving loaded firearms within the reach of such a young child.

"Placing any dangerous weapon available for possession by a child of immature years borders on criminal negligence,” according to Stone who declares also that “blame lies not so much with the child as with the person or persons who made the crime possible. Thus far the girl's parents have declared that the gun was not loaded when It was placed in the garage where Gloria found it when she carried out her threat.

Police officials have been unable to gain much information from Gloria, save that she deemed it just to take the law into her own hands and settle accounts for the stolen rag doll. Efforts to clear up the matter by questioning Gloria have succeeded in nothing more than making her tale a jumbled array of inconsistent facts.

The murder of the Ethridge girl was cue for a heated debate among Colorado psychiatrists as to Just what motive prompted the crime. A large number are of the belief that the girl was merely following a primitive instinct that is common to us all in early life while others are of the opinion that moving pictures of shooting arrays, bighted honor, etc., furnished the environment necessary to account satisfactorily for such an act violence.

FULL TEXT: Cheyenne, Wyo., July 16. – Relatives from Denver today claimed the body of Mrs Beulah Ethridge, formerly of Logantown, Colo., who killed herself Here last night after a year's despon- detrcy and mourning for her six-year" daughter, Rose May who was shot and killed by a playmate a year, ago.

The body was to be taken to Denver for burial. Because authorities said there was no doubt but what death was by suicide an inquest was considered, unnecessary.

Mrs. Ethridge ran screaming from her room at a boarding, house and cried out that she had taken poison. In the room was found a clipping from a Denver newspaper of August 4  last rear telling of the tragic death of her daughter.

Apparently Mrs. Ethridge had been reading the clippings a short time before she took poison. She died before reaching a hospital.

Rose May was shot by Gloria Utter, five, at Logantown, the newspaper clippings said. The shooting, the story said, occurred as the climax to a quarrel over a doll. 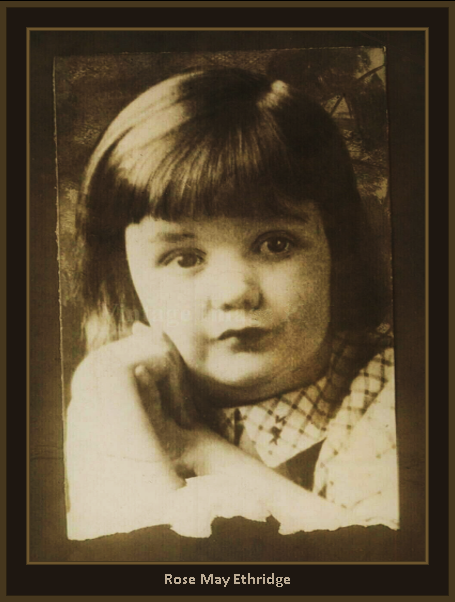 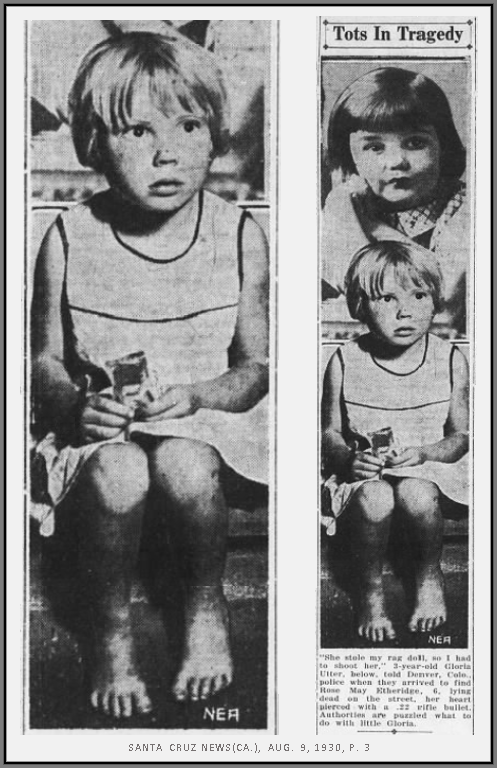 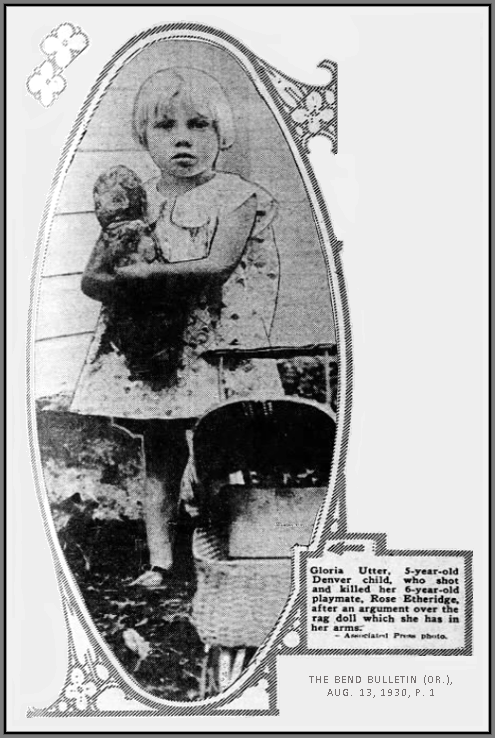 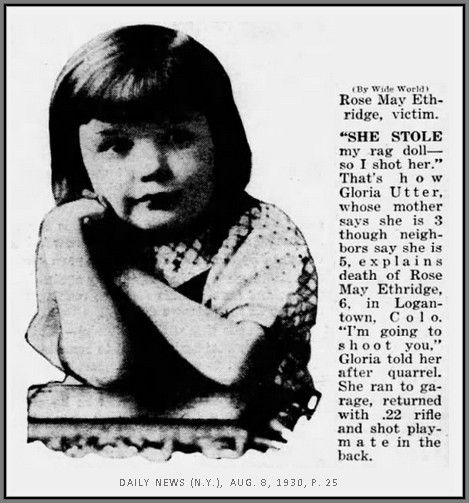 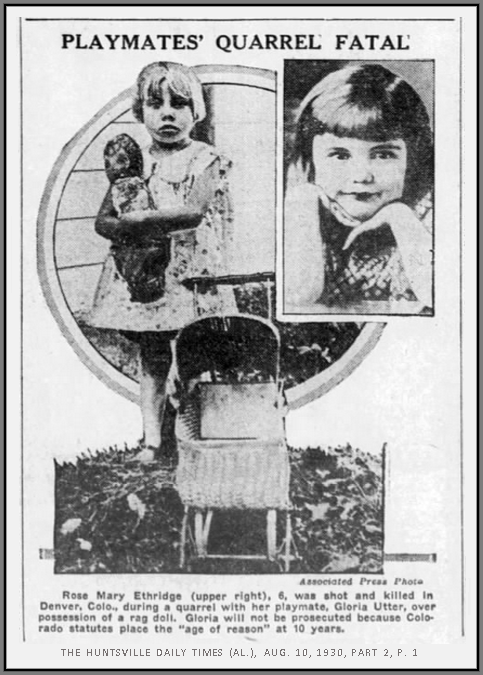 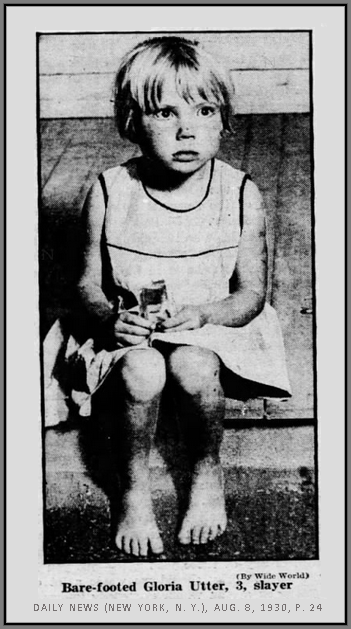