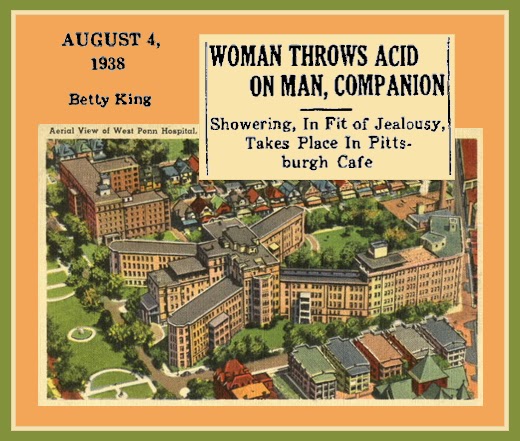 FULL TEXT: Pittsburgh, Aug. 4. – In a fit of jealousy, a woman showered a man and his dancer-companion with acid last night in a North Side cafe.

Janet Aldrich, 22, a dancer, was seated at a table with a young man when a woman approached, and asked the man: “Do you want me or her?”

“I'll take her,” the man smilingly replied. Then the “other woman” threw acid over the man and Miss Aldrich. As he fled from the cafe, the man discarded his acid-soaked shirt, which was the only clue the police had to his identity. Miss Aldrich received acid burns on the face and left arm.

Police later learned that Betty King was treated for burns on both arms at West Penn Hospital. Although she claimed she suffered the burns when a bottle of acid fell from a medicine cabinet in her home, Miss King was charged with assault with intent to maim after Miss Aldrich identified her as the alleged acid thrower.