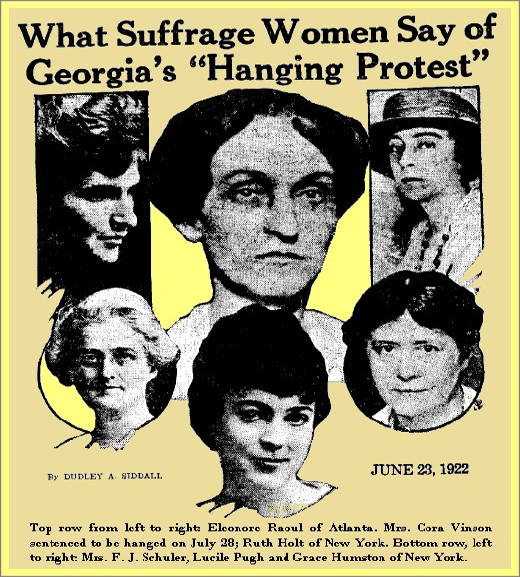 NOTE: Mainstream feminism of the past was not of the radical Marxist sort, --characterized by misandry and an orthodox “abolish the family” dogma -- which has dominated in the post-1960s era. From the early 1900s onward, women had gained privileges under increasingly intense “chivalry justice” attitudes held by men, so much so that many women had for decades been tempted to commit murders with the knowledge that they could frequently get away with it if they were successful in convincing juries that they were unhappy about something before having committed their homicidal act.

FULL TEXT: Atlanta, Ga. – Now that women vote like men, should they pay the same penalty for crime as men? Even though the penalty is hanging?

Georgia hasn’t hanged a white woman but once in its history. That was 50 years ago.

Today, however, Mrs. Cora Vinson is in “The Tower” here under sentence to go to the gallows on July 28, for the murder of her husband. Dr. W. D. Vinson, Solicitor General John A. Boykin, prosecutor, asked for a life sentence. The jury, however, went beyond his request and voted for death.

Colonel William Sehley Howard, former member of congress, who aided in prosecuting the case, said in an interview:

“Women have demanded equal, rights in business and politics, in every way they have indicted their desire to be treated as men. Why then should a woman – solely on sex grounds – be accorded any special privilege by a jury? The time has come when they should be treated like men before the bar of justice.”

An interesting question! If it is true that sentiment toward women is changing from chivalrous to man-to-man attitude, defense lawyers in future woman murder trials may have to shift their tactics. The aid sympathy pleas and sympathy stage settings will be relegated to the place of outworn things in legal practice.

“Should women pay the same penalty for crime as men, even though the penalty is hanging?”

MISS ELEANORE RAOUL, Atlanta, Ga., president Atlanta League of Women Voters: “Woman has passed through the age of dependency into an age which regards her as an intelligent being. Consequently there should no longer be a question as to whether she should be treated as a human being fully responsible for her acts. I believe we women are prepared to accept our responsibilities along with our priveleges.”

SHERIFF J. L. LOWRY. Atlanta, Ga., charged with executing condemned prisoners in Fulton county: “A woman should not be hanged – well simply because a woman is a woman.”

MRS. G. T. CORNETT, Atlanta, matron in “the Tower,” who is in charge of Mrs. Vinson: “They’d better not hang Mrs. Vinson! I don’t believe any woman should be hanged.”

JUDGE NEWTON A. MORRIS, Marietta, Ga., attorney for Mrs. Vinson: “Imagine yourself pulling the trigger of a death trap and sending a woman to her doom. Then ask yourself if you really believe a woman should be hanged.”

GRACE HUDSON, prominent New York attorney: “If guilty a woman should be punished as well as a man. But if the prosecuting attorney makes a recommendation for life imprisonment instead of a death sentence, it should be heeded. In hanging a woman, the state would be committing the same crime for which it sentenced her. I am against capital punishment."

RUTH HALE, New York, president of the Lucy Stone League, which believes women should retain their maiden names alter marriage: "If I were the woman in the Georgia case, I would insist on being hanged. As a citizen any woman must bear the same responsibilities as a man. It is wrong for her to expect even Georgian chivalry!"

LUCILLE PUGH. New York, active feminist: “Women should ask no privilege nor seek any favors. The action of the southern jury, however, doesn’t sound much like the usual thing.”

MRS. ADELE D. PRIESS, New York policewoman: “I am opposed to capital punishment. But as long as it is a part of the law, a woman guilty of a crime which warrants such a sentence should pay the penalty. But if the prosecuting attorney asked for a life sentence, there must be extenuating circumstances which should be taken into account.”

MARGARET MARY MORGAN, San Francisco, suffrage leader and California’s first woman supervisor: “If the state law calls for capital punishment, if this woman is guilty, then she should be shown no special favor not necessarily be cause she has won equal rights, but because the law if existent should be invoked.”

MRS. HENRY W. CHENEY, Chicago, president Illinois League of Women Voters: “A wrong is a wrong and sex should not interfere with the proper administration of justice. However, I am opposed to capital punishment. In Mrs. Vinson’s case I cannot attempt to adjudge her guilt or innocence, but on a broad basis I am set against sex influencing the process of the law. The penalty to fit the crime as fixed by the will of the majority should be imposed.” 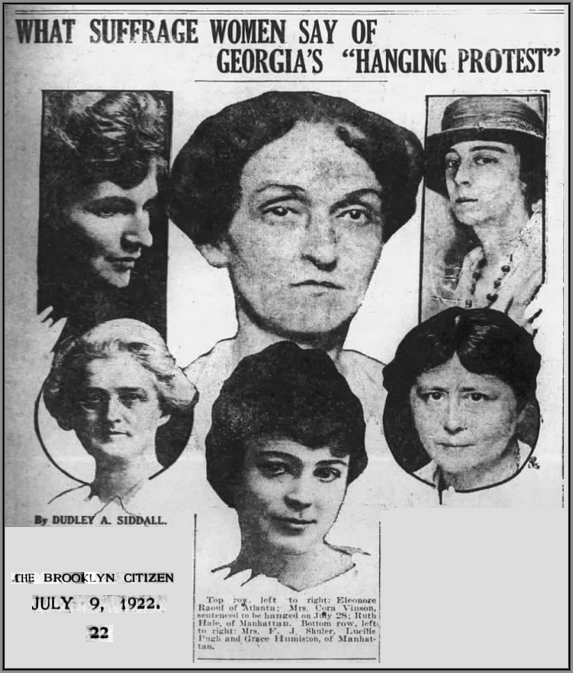