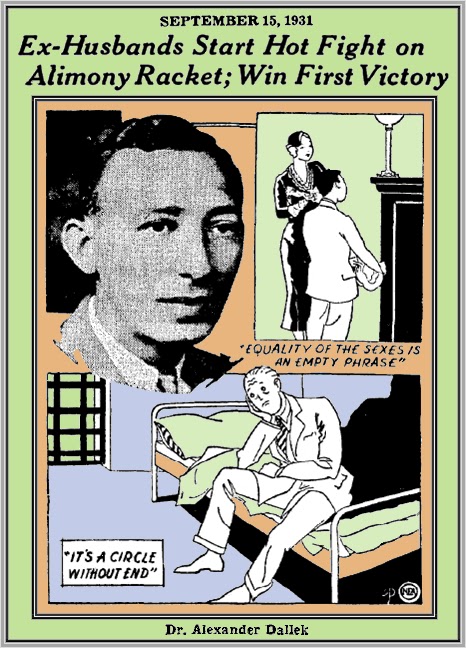 FULL TEXT: “We are going to fight every deserving case all the way to the highest courts” . . . promises Dr. Alexander Dallek (above), executive secretary of the National Sociological league . . . which is leading the battle on injustice in the present alimony laws.

NEW YORK.—Because he didn’t pay up, he sits in a cell. And he may sit there meditating, “from now on.” Since he is in jail, of course, he can't earn any money. Hence, he can’t pay. It is a circle without end. You can't put a man in jail like that, you say? But he knows you can, and here's the way he writes to those who he believes may help him:

“Counsel states no matter how just my claims are he will not give me a chance to go to trial until I pay him the $100. His exact words were ‘You will rot in here before I will get you out.’”

He is a victim of the “alimony racket.” His is a typical case, one of many which the National Sociological league, organization to fight injustice in the present alimony laws, has on file. The league has 25,000 members in every state in. the union and millions of sympathizers.

It has just won a victory which has jolted gold-digging ex-wives. Supreme Court Justice George V. Mullan of the Bronx has handed down a decision which allows a person who has failed to pay alimony because of unemployment to appeal for a reduction. And there is rejoicing in the ranks of the alimony jail-birds.

“It is encouraging, that’s all,” says Dr. Alexander Dallek, executive secretary of the league. “It is only one victory we have won in the courts. We are going to fight every deserving case, even carrying it to the highest courts.

“We have found that attempts to pass legislation to help unfortunate victims are hopeless. Legislators, as most of them are lawyers, simply will not pass laws to help the victims of alimony.”

The League, bitter because it has proof that the lives of scores of men are ruined each year because of unjust operations of what it describes as “Simon Legree” alimony laws, believes that men are not getting a fair break.

Although admitting that alimony is in many cases justifiable and desirable, it contends that a gold-digging, vindictive, heartless wife has everything in her favor when the case goes to court. The modern, much publicized “equality of the sexes” is an empty phrase. Under the present laws, unless the magistrate happens to be exceptionally fair-minded and just, an unscrupulous lawyer can obtain nearly any sum he desires for his woman client.

In the West 37th st. jail—known as the “Alimony jail”—the population is sometimes 30, sometimes more. In other jails, all over the country, the league has records of men who are in jail indefinitely, unable to help themselves.

Emanuel Redfield, counsel for the league, won the verdict in Bronx court. He felt the law was without conscience, as it existed, and even after Judge Mullan had denied the first request for a reduction for Redfield's client, Redfield persisted.

His argument was logical. His client had been assessed to pay alimony of $50 a week. When the depression came he lost his job. His ex-wife protested and he went to jail — where, of course, he couldn’t get a job.

“It was unreasonable to expect that the law would force a destitute man to pay back alimony,” says Redfield, “when he couldn’t pay the present alimony. It didn’t make sense.”

So Judge Mullan gave the decision in the client's favor, stressing the point that, although the client was in arrears, he could have his alimony reduced if he tried to get a job, and couldn’t.

There the matter rests. Alimony lawyers, accustomed to fat court fees, are wondering if it will be a lean winter.