A Fatal Case of Alimony Racketeering - 1932 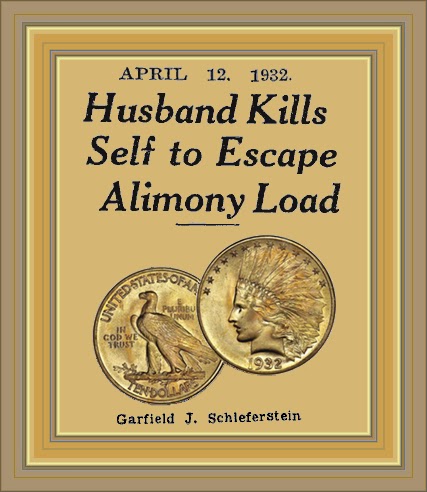 FULL TEXT: Declaring his act to be a protest against the alimony racket, Garfield Schieferstein, 50 years old, 850 Cornelia avenue, owner of three apartment buildings on the north side, committed suicide last night by inhaling carbon monoxide fumes from the engine of an automobile in a private garage in the rear of 3511 Rokeby street.

In thirteen years, Schieferstein had paid $32,500 alimony to his wife, Mrs. Mildred Schieferstein, 1653 Addison street, under a separate maintenance decree. This included support also for a daughter, Dorothy, 18.

~ Forced to Live in Poverty. ~

In a farewell letter, Schieferstein wrote that because of the alimony payments he faced the loss of his properties for nonpayment of taxes, and was forced to live like a hermit in a vacant flat with a chair and a bed as his only furniture.

“I leave the world,” Schieferstein wrote, “because I have been ruined by my wife and laws and courts that make the racket of alimony possible. I have paid $2,500 a year for thirteen years to a woman who tricked me into marriage and has been tricky and dishonest ever since.

“I am in a position where I cannot meet my obligations even though I live like a hermit in one of my vacant flats with but a bed and a chair as my only furniture.

“I had the grief and she had the gravy. Good-by world, you are too much for me.”

In his not Schieferstein mentioned that appeared before Judge Harry B. Miller on April 2 for a hearing on reduction of alimony, and that the case was continued to April 15. Schieferstein believed, however, he wrote, that “the robbery will continue.”

Judge Miller recalled the case last night. Begun thirteen years ago, it was not his originally, and came before him through routine channels. No detailed evidence has been heard as yet. A retroactive reduction may have been possible, the judge said. His attitude in such cases, he added, took into consideration the fact that conditions now [during the Great Depression] make it impossible for men to pay alimony today that they may easily have met several years ago.

Schieferstein fell behind in his payments recently, his widow admitted last night. However, he managed to escape joining the “alimony club” in the county jail. The last census showed 89 husbands or ex-husbands in jail for failure or inability to meet alimony payments. Of these 52 have been committed by Judge Daniel P. Trude.