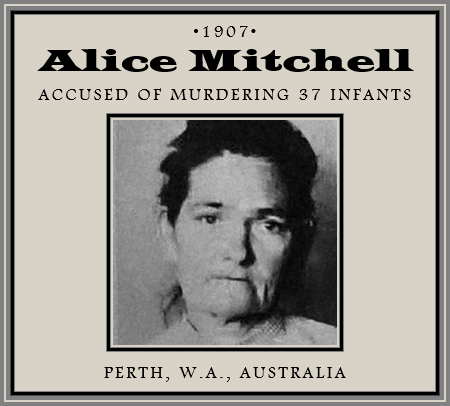 FULL TEXT (Article 1 of 2): Perth (Western Australia.) – The adjourned inquest touching the death of the infant Ethel Booth, who died in the Perth Hospital on February 4th, was continued to-day. Mr R. W. Pennefather, K.C., appeared on behalf of the Infants’ Protection Society, and Mr Villeneuve Smith on behalf of the woman, Alice Mitchell, in whose care the infant was placed prior to its removal to the hospital, and who was subsequently arrested in connection with the death of the infant.

Mr. Pennefather, in outlining the evidence to be submitted, said that on February 5th Corporal O’Halloran visited the house of Mrs Mitchell in Edward street, to make inquiries regarding an infant. Mrs Mitchell brought the child to him. The infant was frightfully emaciated, and was not able to keep off flies, which swarmed on its face. Its clothes smelt offensively, and there was an offensive odor coming from its body. During the inquiries the corporal made, he found that another child had died at Mrs Mitchell’s house, and from questions he put to Mrs Mitchell he also found that Mrs Mitchell had not reported the death. The same, afternoon, accompanied by Dr. Davey, he again went to Mrs Mitchell’s house. Dr. Davey found, however, that the child Brown had been given insufficient nourishment necessary for its existence, and was simply dying from starvation. Dr. Davey asked Mrs Mitchell if she had any other children.

She replied “Yes,” and in the room where baby Brown was they saw another child, which, if anything, was in an even worse condition. This was the baby Ethel Booth, whose .death formed the subject of inquiry. There were swarms of flies, and the child was so terribly weak that she was not able to raise her hand to keep them off. There was an awful stench in the room, which was in an untidy and neglected condition. When Dr. Davey saw the child Booth, which was five months old, he expressed the opinion that she could not live ten days. The child did not live anything like that time. The child was brought to the hospital by her mother, and died within 24 hours afterwards.

A post mortem revealed no trace of airy disease, and showed that the child was terribly emaciated, being a mere skeleton, and that death was due to insufficient nourishment. When taken to the hospital the infant Booth, though five months old, weighed only 7 lb. At her birth she weighed 8 1b. The child, when taken to Mrs Mitchell’s house, was in perfect health. It was the duty of persons conducting such establishments as Mrs Mitchell’s to register the deaths of any children, and to keep a register of infants placed in her care. Mrs. Mitchell had produced a register which commenced on December 16th, 1902, and closed December 16th, 1904. Inquiries made by the police into the deaths of children showed that Mrs. Mitchell had frequently changed her address. 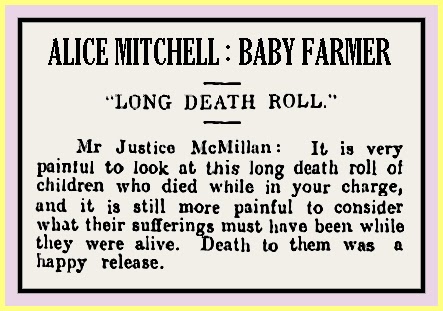 When living in Wellington street she reported six deaths, in Beaufort street five deaths, in Cavendish street eight deaths, in Lord street one death, in Edward street nine deaths, or 20 out of a total of 32. One doctor had attended 22 of the cases that had died. The cause of death mentioned in the certificate was in nearly all cases marasmus, or wasting away of the child. The house was kept in a filthy condition, seven children at times sleeping in one bed, the children crawling out into passages, eating dirt from fowls! There was a lady inspector who used to go and have a chat with Mrs Mitchell at the door, hut never went inside and inspected the children. This lady inspector was apparently very friendly with Mrs Mitchell, for, under the nose of the authorities, she had gone early to Mrs Mitchell’s and said. “The police are coming to inspect. Don’t tell anyone you saw me.” One woman living in this establishment, was so abominably filthy that vermin and hair was falling from her head, and this woman, who was suffering from a dreadful disease, was allowed to nurse children.

At the inquest in connection with the death of the infant Ethel Booth, Police Inspector Sellenger declared, from what he could learn, 32 out of 35 children in Mrs Mitchell’s charge, died. A witness said that a lady inspector under the Perth Board of Health visited the house six times to his knowledge, and she always seemed in a hurry to get away again, and only looked through the premises once.

FULL TEXT (Article 2 of 2): The Criminal Court at Perth, West Australia, was crowded on April 16th, when Alice Mitchell, who was recently found guilty of manslaughter of a child, was brought up for sentence. The portion of the Court set apart for women was densely packed, and as the convicted woman, neatly attired in black, with cream lac & collarette, and violet flowers under her hat, stepped into the dock, all necks were craned in her direction. She trembled like a leaf, and started somewhat when Air Justice McMillan called her name. His Honor said: Alice Mitchell, the jury have found you guilty of manslaughter. They have come to the conclusion that you had no criminal intention, but that the death of baby Booth was caused by your criminal negligence.

With that I verdict I entirely agree, but I must say I have found very great difficulty in coming to a conclusion as to what sentence I ought to pass on you. I am only sentencing you for the death of this one child Booth, but in order to see what your conduct has been I am entitled, as the jury was entitled, to look at the surrounding circumstances, and the way in which you have conducted the business you have been carrying on. It is very painful to look at this long death roll of children who died while in your charge, and it is still more painful to consider what their sufferings must have been while they were alive. Death to them was a happy release. I am quite satisfied in my own mind that for years past you have become, as many women who carry on this kind of business have become absolutely callous to the sufferings of children entrusted to your care, the only object being to make a living. I am afraid you have felt safe by reason of neglect on the part of those whose duty it was to see that you did your duty to the children entrusted to you. You treated with neglect the law for the protection of infant life, and the neglect of that law was your protection. I can find very little to justify me in extending to you the mercy I should like to extend to women of your years. You are a woman getting up in life, and whatever term of imprisonment I may pass on, you will affect you more severely than it would a younger woman.

Still, I am going to sentence you to such a term of imprisonment as will not only punish you tor your misconduct, but act as a warning to others who may be running the same risk which you have run. Your misconduct has been found out and if any other woman appears in a criminal dock, if she is a younger woman, the will not leave the dock with the specially light sentence I am going to pass on you – one of imprisonment with hard labor for five years. Mrs Mitchell nearly collapsed when the sentence was pronounced. 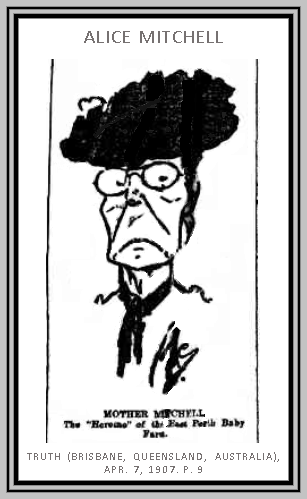 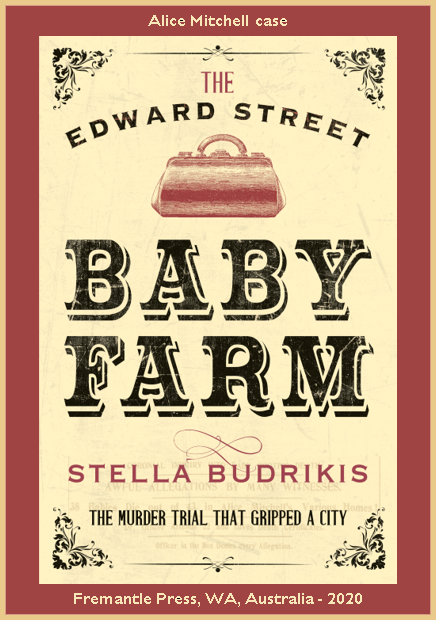 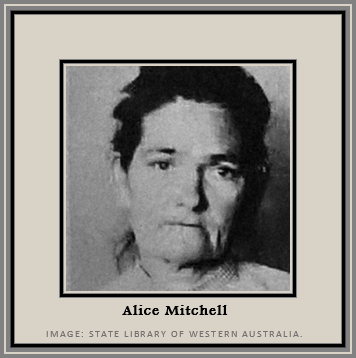 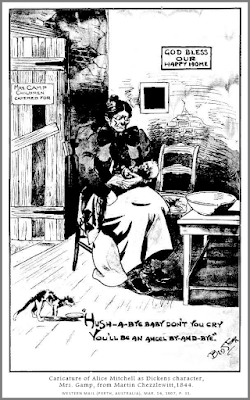