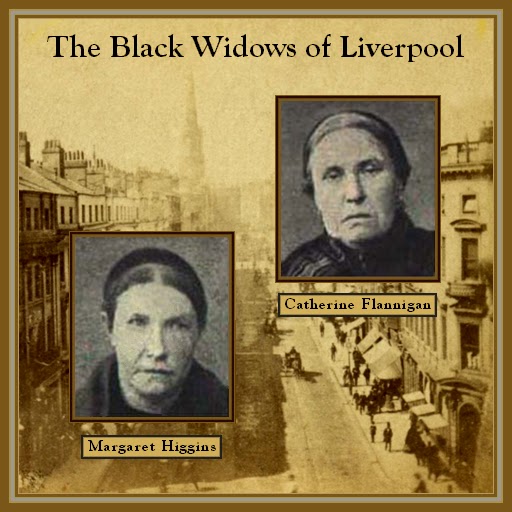 NOTE: Several different spellings are found in sources. Flannigan, Flannagan, Flanagan.
***
WIKIPEDIA: Catherine Flannigan (1829 – 3 March 1884) and Margaret Higgins (1843 – 3 March 1884) were Irish sisters who were convicted of poisoning and murdering two people in Liverpool and suspected of 15 additional deaths. They were both hanged on the same day at Kirkdale Prison.On the third of March 1884, The Black Widow Sisters of Liverpool, Catherine Flanagan, 55, and sister, Margaret Higgins, 41, were hanged at Kirkdale Gaol in Liverpool, for the murder of Thomas Higgins, Margaret's husband.

In 1881, Thomas Higgins, his wife and his young daughter Mary, 10, all took lodging at Catherine Flanagan's house at 5 Skirving Street, Liverpool where after a short while, Thomas's wife died. Flanagan's sister Margaret, recently widowed (under suspicious circumstances) married Thomas on 28 October 1882. By the end of that November, Mary died. Thomas Higgins died on 22 October 1883 was poisoned by arsenic obtained by flypapers. His death was premeditated and was carried out shortly after his insurance had increased. His brother Patrick made inquiries about Thomas's death and contacted Dr. Whitford, who had certified his death due to dysentery. The coroner was alerted and a postmortem was carried out. The chemical analysis of this examination confirmed the fears of Patrick. Thomas was a strong and healthy man with no signs of disease, so it was proved that arsenic was the cause of death, not dysentery. Following this revelation, other recent sudden deaths in the Flanagan household were recalled and permission was granted for the exhumation of three more bodies.

The three bodies exhumed were those of Catherine's son, John, who had died in December 1880 at the age of twenty-two, and for whom his mother received an insurance payment of 71.8s.0d (pounds sterling); Maggie Jennings, an eighteen-year-old lodger, whose death in January 1883 netted 79 (pounds sterling); and little Mary Higgins, daughter of Thomas from his first marriage, who had brought a quick profit for her stepmother (she paid out 1/6d in premiums and received 21.18s.6d (pounds sterling) on Mary's death). The postmortems showed that their deaths were all due to arsenic poisoning.

Four other women were involved, but the courts decided that they were not involved in the poisonings but were part of the crime.

Their final death toll after a decade of killing was four, but modern historians have claimed that the group may have killed as many as seventeen people.

Most of the group avoided conviction, but the two sisters who led the group were convicted and hanged. Witness reports state that they were hanged side-by-side.

FULL TEXT: An extraordinary poisoning case is being investigated in Liverpool. The heroine of the drama bears the name of Catherine Flannigan, and she is accused of making away with her brother-in-law, a certain Thomas Higgins who died very suddenly one Saturday morning under very suspicious circumstances. It is stated that Flannigan, who, was sister to Mrs. Higgins, had insured the deceased in several friendly societies, and the allegation is that she brought about his death in order to secure the amount for which she had insured him. A brother of the deceased, having his suspicions aroused, took steps to prevent the funeral taking place, and communicated with the police and Drs Rimriok and Whitford. When the police interfered there was a hearse at the door of the deceased's residence to take away the remains to the cemetery; but the hearse was sent away, and a post-mortem examination made on the body, when it was stated traces of poison were found. The woman Flannigan, on seeing the police enter the house, hurriedly left, and her whereabouts has not yet been discovered. Mrs Higgins, the wife of the deceased and sister to Flannigan, was taken into custody, on suspicion of being concerned in Higgins's death. An inquest was opened on the following Friday by the City Coroner into the circumstances attending Higgins death, and adjourned for a week, pending enquiries being made by the police, it is alleged that Flannigan has been in the habit of insuring the lives of the people in the neighborhood and drawing the amount for which she had insured them on their death. The police, it is stated, have seized a large number of receipts for money this received by Flannigan, and are said to be in possession of information which will lead to revelations of a very extraordinary character. The Home Secretary has ordered the exhumation of the bodies of several persons supposed to have been poisoned by Flannigan. Insurances, amounting to upwards of £150 had been effected on Higgins’s life.

STARTLING STATEMENT BY A FORMER LODGER.

Jennings, a former lodger, made the following startling statement – I am a labourer, and have, with the exception of three or four months, lived with Mrs Flannigan for about twelve years. My daughter and my wife also resided in the same house. My wife died soon after, I went to live with Mrs Flannigan, and my daughter, after three days illness, in January last. Shortly after dinner on a Sunday, Margaret, my daughter, became very ill, with violent vomiting and purging, and died three or four days after in great agony. Mrs Flannigan had insured her for £50 in the Lives Office, and for various sums in other societies unknown to me. I thought it strange and asked Mr. Higgins what I should do. He advised me to take out letters of administration, and apply at the offices of the Lives, but when I went to draw the money Mrs Flannigan and her daughter followed me “like detectives.” Out of the £50 I gave Mrs Flannigan £30 and her daughter £3, keeping £17 for myself. Mrs Flannigan also received £9 from the Scottish Friendly Society, out of which she gave me half a sovereign. I also heard that she insured my wife for £16. She denied it, but I afterwards ascertained that she had done so. During my daughter’s illness Mrs Flannigan frequently, administered medicine to her, which she said she obtained from the “sixpenny doctor's” in Walton road.

When she was absent her sister (the wife of the deceased man, Thomas Higgins) gave the medicine. After that I was afraid to live in Mrs Flannigan's house any longer, and took fresh lodgings. But one night, sometime afterwards, when I was “on the beer,” she persuaded me to go and live with her. The neighbors often remarked about the suddenness of my daughter’s death and one said, “God help you, poor man. Mind yourself while you are there.” I saw the deceased man, Thomas Higgins on the day before he was taken ill. In fact, he was in a public house in the neighborhood of Athol-street on the Sunday. He was taken ill on that Monday and died on the Tuesday. Mrs Flannigan went to a the house just before the funeral was to take place, but when Mr Patrick Higgins and doctors came she disappeared. I saw her an hour afterwards going in the direction of her house in Latimar-street, but shortly afterwards, she was not there and I have not seen her since. 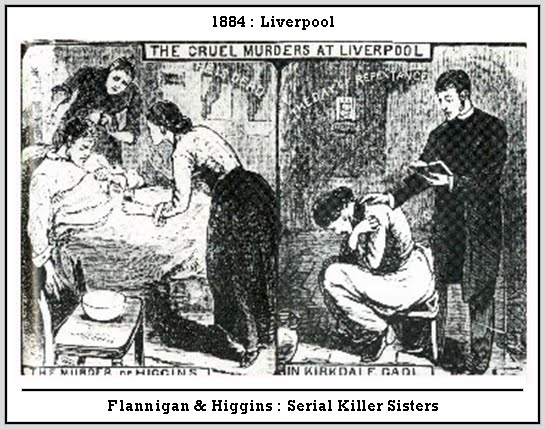 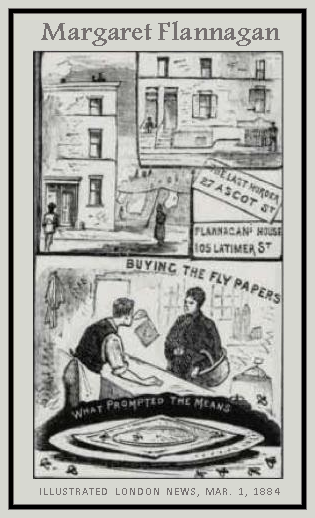 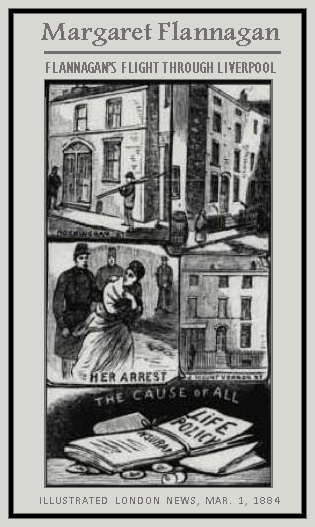