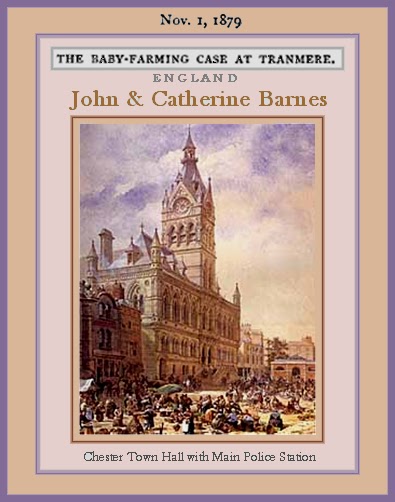 FULL TEXT: At the Chester Assizes [court house] on October 28 th and 29 th, before Lord justice Brett, John and Catherine Barnes, residing at Tranmere, were tried on the charge of willfully murdering three infants which had been committed to their charge. The evidence of Dr. Laidlaw, who had examined the children, proved that the cause of death was starvation induced by the want of food, proper clothing, and other necessaries. The jury returned a verdict of manslaughter. Lord Justice Brett, in passing sentence, said the prisoners had for years carried on the vilest trade that human malignity could have invented; and though the jury had by its direction found them not guilty of murder, they had committed a series of premeditated and reiterated crimes which were within a hairsbreadth of murder. It was true they had been guilty of manslaughter only, but there were degrees of manslaughter; and, in such a case as this, there could be only one sentence – that of penal servitude for the rest of their natural life.