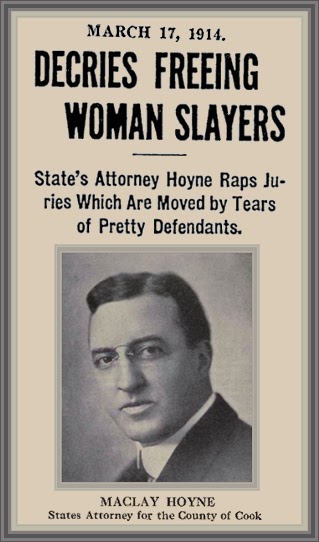 Chicago, March 16. – After he had caused to be dismissed the charges of murder against Mrs. Augusta Dietz and George Nurnberg, indicted on a charge of murdering the woman’s the woman’s husband, George Dietz, a wealthy merchant, State’s Attorney Maclay Hoyne issued a statement in which he bitterly denounced the manner in which women slayers of her husbands have escaped punishment in Cook county.

Mrs. Dietz was the fourteenth woman accused of husband murder who was not convicted in Chicago.

State’s Attorney Hoyne said in his statement that he would call to the attention of Mayor Harrison the undue activity on the part of some police officers in aiding persons charged with crimes to secure bail and attorneys. He also arraigned the class of jurors who sit in criminal court cases.

“The manner in which women who have committed murder in this county have escaped punishment has become a scandal,” said Hoyne. “The blame in the first instance must fall upon the jurors who seem willing to bring in a verdict of acquittal whenever a woman charged with murder is fairly good looking and is able to turn on the flood gates of her tears, or exhibit a capacity for fainting.

“I recall one case in which a woman was acquitted of murder in the afternoon and spent the whole evening carousing with her counsel and a relative in South Side saloons.

“In some cases in which women have been charged with murder in this county, the circumstances surrounding the deaths of the men have been much as to indicate a brutality and fiendish ferocity greater than that displayed by the worst male criminal.

“Experience in the criminal court has taught me that while the normal woman or the average woman, if there is such a thing, is less prone to commit a crime than a man, when a woman does become a criminal she sinks lower and goes farther in brutality and cruelty than the other sex.”