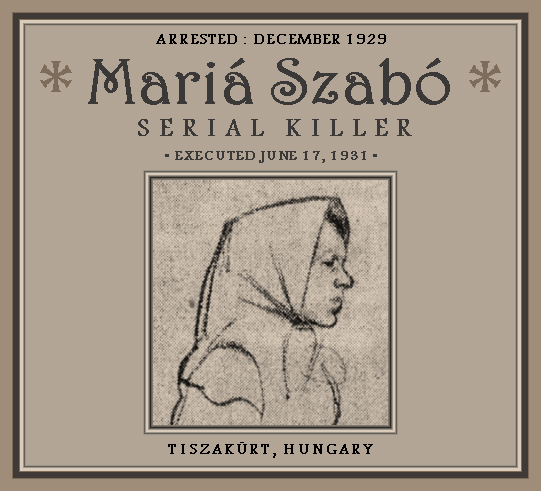 FULL TEXT (Article 1 of 2): Budapest, June 17 – Two women participants in the mass poisoning of Theiss Valley, one of the strangest and most ghastly chapters of modem crime, were hanged today at Szolnok, Hungary.

They were Ehthej Szabo and Christine Chordas, sentenced for poisoning Frau Szabo’s father and uncle at Tiszakurt in March, 1925.

Both fainted when they saw the gallows, and they were hanged simultaneously while unconscious.

The two women executed today were the second and third to die on the gallows in Hungary within the past 50 years.

Sentence was imposed on Estliej Szabo and Christine Chordas June 22 of last year, while Joseph Madarasz and Laszlo Szabo were sentenced to life imprisonment in the same case.

Altogether 34 persons were tried for the murder by poisoning of 42 others, the victims in nearly all cases being husbands, brothers, fathers or mothers of the defendants. Most of the crimes took place in the two neighboring villages of Nagyrev and Tisznkuert. The poisoning in all cases was by arsenic and in at least 20 cases it was supplied by the village midwife, Susie Olah, known as “Aunt Susie.”

Women were primarily responsible in virtually all the cases. The usual motive was desire to get rid of men who had grown obnoxious because of drunkenness, brutality, advancing years or other reasons. Virtually all the “peasant borgias” took the view that they had not performed murder because they shed no blood.

EXCERPT (Article 2 of 2): [T]he Widow Szabo, had offered to sell [a neighbor] poison enough to kill him and show how to administer it—all for 120 penges (about $20) down, 120 penges more after the funeral and a final installment of the same amount when the estate had been settled up. Frau Szabo said she could guarantee the poison would work without making the doctor suspicious because the had tried it successfully on her own husband and brother.

The precentor knew that his old friend Herr Szabo had gotten to be an invalid and nuisance to his wife before his last and brief illness, but he was puzzled as to why she had murdered her brother. It was later discovered that the brother carried life insurance in his sister’s name and she needed the money.

Next morning without waiting for breakfast, the precentor called upon the officer in command of the village s soldier-police force. That night, after all the village was asleep, the police quietly took the widow Szabo to the neighboring large town of Szolnok, where the police judge soon drew the facts from her. She had, indeed, poisoned her husband and brother, and gotten the stuff from another widow, Frau Zsuzsi Fazekas, the village midwife, who was equally efficient at bringing people into the world or pushing them out of it.

Frau Fazekas was also arrested and brought to Szolnok for questioning. But, after two days, when the judge had gotten no admissions from the iron-willed woman, she was allowed to go home under the impression that she had bluffed the authorities. Meanwhile, they had searched her house and found evidence of a murder business, suggestive of Rome under the Borgias.

In the attic of the house belonging to this woman, who was not a licensed midwife though the best general nurse in either village, they found hidden away a large supply of arsenic flypaper. Between the floor-boards of the attic and the ceiling of the room below were a dozen pint bottles carefully corked and filled with water, in which this same flypaper was soaking. The other bottles contained the arsenic-saturated solution from which the papers had been removed.

Taking samples from the bottles and replacing the liquid they had removed with, an equal amount of water, they left things so the woman would not suspect that her poison hoard had been found. For two days after her return the poison merchant stayed in her home as if nothing had happened, and then, as the authorities hoped, curiosity began to burn her up. She just had to find out if someone had talked and to caution all the other members how to act.

The second evening after her return she set out on a round of calls. Every few minutes her shawled head turned around that her sharp old eyes might assure her that nobody was following. Nevertheless, she was shadowed most expertly and every house she visited was noted. Also it was noted that in every case she conversed with a woman who had been at least once a widow. On the next evening her ringing of widows’ doorbells began and ended with that of Frau Szabo, the precentor’s neighbor.

This husband and brother killer had been returned to her own abode on the understanding that if she would co-operate with the authorities, she would get off easy. A detective was hidden within earshot when the nurse called, but apparently some warning, perhaps involuntary, passed from the widow Szabo to the widow Fazekas, for after a few perfunctory remarks about the weather, the caller went straight home.

[Excerpt from: “100 Self-Made Widows in One Jail – Husband Poisoners – Rumours of the Wholesale ‘Removal’ of Unwanted Husbands Start the Authorities to Open Dozens of Graves in the Village Church Yard at Nagyrev, Hungary, With Startling Results,” The American Weekly (San Antonio Light) (Tx.), Nov. 24, 1929, p. 3] 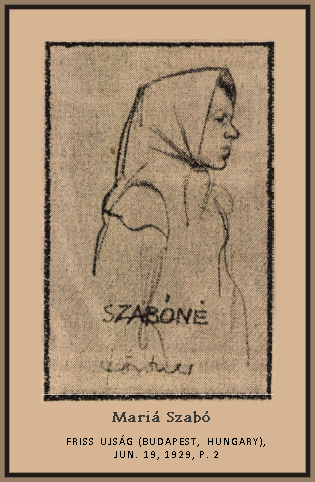 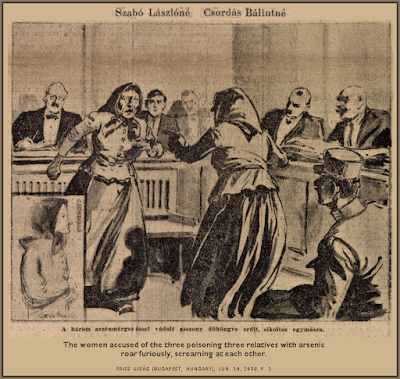 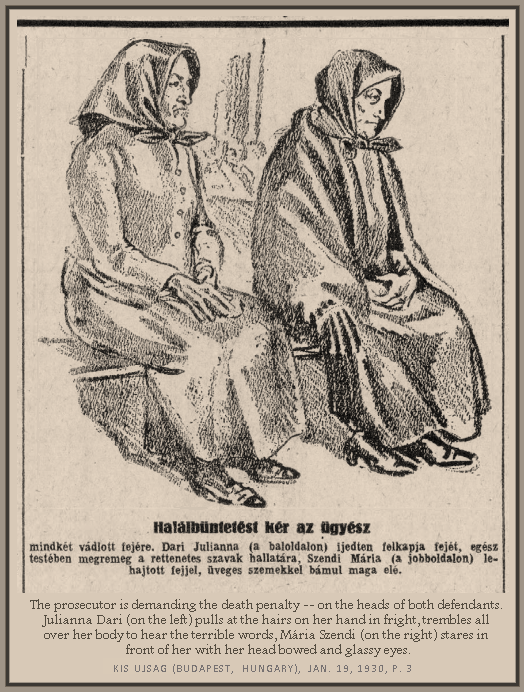 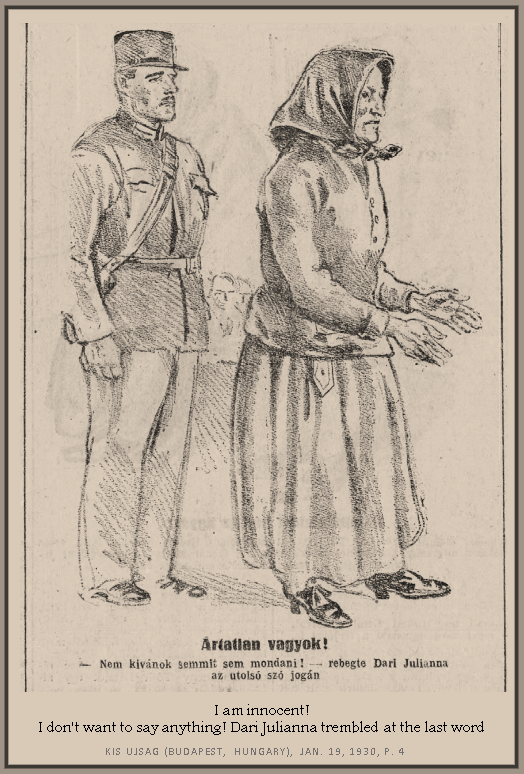 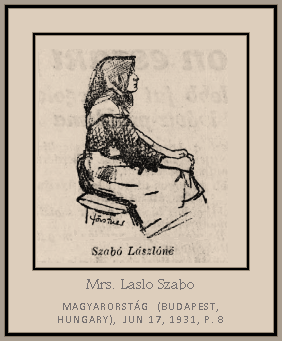 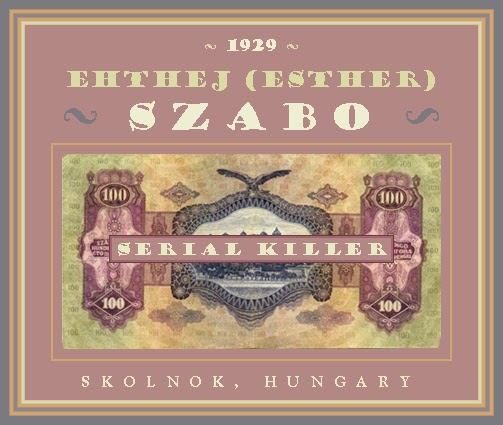