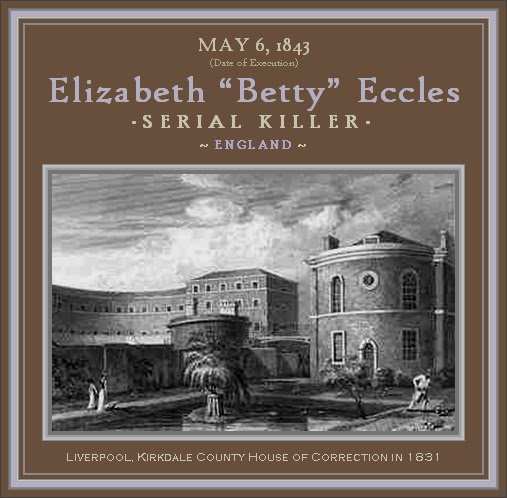 FULL TEXT: At the assises at Liverpool, on Tuesday, Betty Eccles was indicted for the wilful murder of William Eccles, at Bolton, by administering to him arsenic – Mr. Armstrong stated the case. The deceased, it appeared, was a lad of about thirteen years of age, in the employment of Messrs. Eden and Thwaites, at Bolton. The prisoner was his stepmother; and the family consisted of the prisoner, the deceased, his brother, Richard and Mary Eccles, the two latter also step-children. The husband, Henry Eccles, was employed at Manchester, spending only the Sunday with his family.

Several witnesses were examined, but the most material evidence was the following:

A witness stated that on the 26th of September last the deceased left his work to go to dinner about half-past eleven o’clock. This was a little earlier than usual, as he had to go some errands, which also detained him until about two o’clock, when he came back to his work. He then seemed very sick, and was finally obliged to leave off work about three o’clock, when he went away for the purpose of going home, and he soon after died.

Richard Eccles, the younger brother of the deceased, said, that on the day in question, in coming home for his dinner, he met the deceased coming out of the house, having, apparently, been eating. On witness going in, he found the plates washed up and put away. He, himself, dined off potato hash, which was in the oven. No one else then ate of it; but the prisoner said she had dined off it too. Some time before the prisoner was drunk, and the deceased said he would tell his father. She replied, “If thou dost, I’ll soon be shut of thee.” She beat him sometimes. The house was not infested by rats or mice. Never heard the prisoner complain of them. Alice Haslam died a fortnight before the deceased.

On the Sunday night after, witness asked her to go and see Alice’s grave. She said, “No, I’ve trouble enough on my mind. We’ll have another dead out of our house before long.”

Elizabeth Fell, a neighbour to the prisoner, stated that on the night William Eccles died she went into the prisoner’s house. She asked if it was Richard who was dead, and the prisoner said it was William. Witness asked the cause of his death, and was told it was inflammation. She expressed her surprise at his dying so suddenly, and said she thought he should be examined by a medical man, but the prisoner seemed very angry at this suggestion, and said she had trouble enough on her mind without having any more.

John Turner, bookkeeper at the works of Messrs. Eden and Thwaites, said that the workpeople have a burial club among them for the people employed there. The deceased was a member of it. About the 10th of September the prisoner called on the witness, and asked for burial money for her daughter, by a former husband, Alice Haslam, who had just died. It was then explained to her that she was not entitled to such burial money, as her husband was not employed in the works, and the deceased Alice was not in the employment of Messrs. Eden and Thwaites.

She came again on Tuesday, the 27th of September, for the burial money of William Eccles. Its amount was 50s. The witness desired her to call again the next day, as he wished to make some inquiry about the matter, having seen the deceased apparently quite well the day before, and being struck by the fact of the second application for burial money coming so soon after the first. The prisoner was taken into custody in the afternoon of Thursday, the 29th.

Mr. Watson stated that he analysed the contents of the stomach. The white powder adhering to the coats was oxide of arsenic.

Mr. Brown addressed the jury for the prisoner.

His Lordship summed up, and the jury, after retiring for some time, brought in a verdict of “guilty.”

His Lordship passed sentence of death upon the prisoner, holding out to her no hope of mercy. The prisoner was very passive until the sentence was passed, when; on the gaoler proceeding to remove her from the bar, she clasped her hands together, and moaned out “Oh, mercy, my Lord and gentlemen! Have mercy on me for this time!"

There were two other indictments against the prisoner for the wilful murder of Alice Haslam and Nancy Haslam, her own children. Alice died on the 10th of September, as already mentioned, about a fortnight before William Eccles, and Hannah some time before. On being disinterred, arsenic in large quantities was found in their stomachs. These indictments, however, were not tried.

FULL TEXT (Article 2 of 2): The execution of these unfortunate criminals, who were convicted at the late assizes, took place on Saturday, at the north-west angle of Kirkdale gaol. The time fixed was twelve, long before which the approaches to the scene of death were thronged with a gaping multitude. The female convict was tried for the murder of her step-son, a boy about thirteen years of age, at Bolton, whom she had poisoned for the purpose of getting a trifling sum of money out of a burial club; and, from the disclosures on the trial, it was too clear that she had also poisoned two children of her own by a former husband for the same object. Buckley’s offence belonged to a milder category, and the jury seemed strongly inclined to reduce it to the worst species of manslaughter. Even after they found him guilty of murder, they recommended him to the merciful consideration of the Crown. He cut his wife’s throat in a field near St. Helen’s, while they were taking a walk on a Sunday evening, she being at the time enciente; but, from his own confession after the act, and other corroborative circumstances, it was evidently the impulse of a frantic moment, done in the heat of passion, and produced by the tantalizing upbraidings of his wife, who was jealous of her husband, and viewed his attention to other females with distrust. At the execution, the Rev. Mr. Appleton read the burial service, at the termination of which Buckley was led to the scaffold, where the rope was placed round his neck. During the process the female prisoner remained in the chair, her eyes fixed intently on the awful preparations which the other criminal was undergoing. This completed, the executioner led her forward; she rose without any seeming agitation, and walked on, her lips moving in prayer. Mr. Appleton attended to the scaffold, still reading the service for the dead. At the close the fatal bolt was withdrawn, and the prisoners in a few seconds ceased to exist. Buckley made a hearty breakfast, but the other wretched sufferer was unable to eat Betty Eccles acknowledged that she had poisoned her step son, but would not say, though she hardly denied, that she had disposed of the other two children in the same manner. The roads to and from the execution were densely crowded, and, from the number of persons in vehicles of every description, it resembled a visit to the racecourse on some attractive occasion. The number present we have heard variously estimated at from 20,000 to 30,000.

[“Execution Of Betty Eccles And Wilmot Buckley, At Kirkdale.” Reprinted from The Liverpool Chronicle, The Patriot (London, England), May 11, 1843, p. 333 (page 5 of this issue)]

EXCERPT: Further enquiries led to the discovery that she had had two other girls, Nancy and Hannah, and another boy, William, by her first marriage, all of whom died in infancy. They were exhumed and arsenic was found to be present in Nancy, who died when she was six, but too little remained of the body of Hannah for reliable analysis. It was also difficult to tell accurately the cause of death of the baby boy, William Heywood. [“The Serial Killer: Betty Eccles, crimeandexecution.com]

A COPY OF VERSES
Pray lend an ear you parents dear,
While I a tragic tale unfold,
Which happen’d in fair Lancashire,
A deed will make your blood run cold,

A wicked woman we’re inform’d
Before a Jury did appear,
To answer for a horrid crime,
The poisoning of her children dear.

This dreadful case did plainly prove,
Her son, 15 years of age was found,
Returning from his labour sick,
In agony upon the ground;
All for the sake of earthly gain,
This cruel parent contriv’d it so,
To poison her children one by one,
Thinking she would unpunish’d go.

This horrid secret was reveal’d,
September on the 28th day,
Which many years had been conceal’d,
In Bolton Church Yard their bodies lay:
These murders they were brought to light,
Their corpse were taken from the ground,
In Death’s cold-arms where they had lain,
And poison on their stomachs sound.

A mother so cruel ne’er was known,
In former ages in this land,
Nine children to their graves were borne,
Put to death by their mother’s hands,

To equal this none can been found,
In murders list so deep a dye,
As the babes whose soaring shades,
For vengeance cries to Heaven on high.

When the Assizes did come on,
Before the Judge she did appear,
When every thing was there made known,
The horrid crime was proved clear;
And then Guilty she was found,
Her awful sentence is to be,
To a gloomy dungeon close confin’d,
Then hanged on a gallows tree.

May the 6th on which she died,
In eighteen hundred and forty three,
When thousands did assemble,
Her execution for to see;
Her children’s blood that she did spill,
To heaven she did not cry in vain,
We hope that in this world we never
Shall see the alike again.

[Pamphlet: Life, Trial, Confession and Awful Execution, Wilmot Buckley at Liverpool this Day, for the Horrid Murder of His Wife, at St. Helens, November 26th, 1842. And of Betty Eccles, Poisoning Her Children at Bolton, Lancashire, [sic]. 8 page pamphlet.] 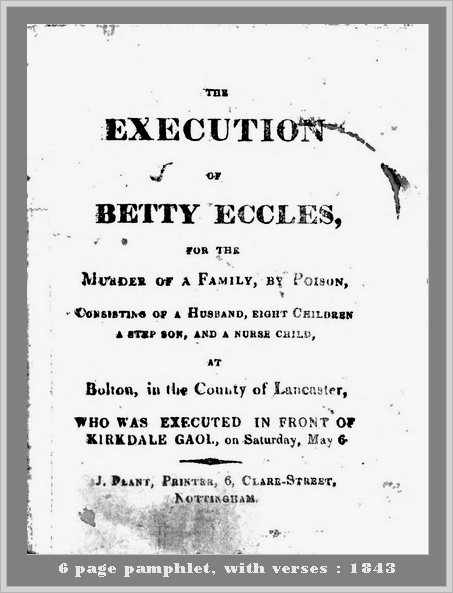