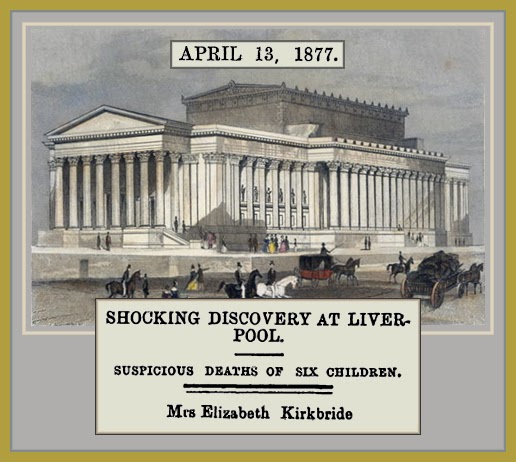 Modern accounts of this case note that the boxes containing the infant corpses were made of tin.

FULL TEXT (Article 1 of 3): A most extraordinary discovery has just been made near Liverpool. In June last, Mrs Kirkbride, a widow, who for ten years had been a schoolmistress near Penrith, Cumberland, left that town and came to Liverpool, leaving behind her at an hotel two boxes to be called for. About a week since, not being called for, they were opened owing to a bad smell coming from them, and. were found to contain the bodies of two young children. One with his throat cut, and the other apparently having been suffocated. A warrant was issued for Mrs Kirkbride's apprehension, and it was executed at Tuebrook, near Liverpool, on Sunday. The Liverpool Mercury says :— when Sergeant Robinson, went to the house he knocked at the door, and inquired whether Mrs Kirkbride resided there. The door was answered by Mrs Kirkbride herself, and at once seeing that she answered the description of the person for whom the warrant was intended by a mark upon one of her cheeks, he told her his mission. After reading the warrant, in which she was charged with concealment of birth at Penrith, she stood silent for a short time, and then remarked that there must be a mistake about it. He, however, told her that she must accompany him, and she then begged that she should be allowed to leave the house quietly, as she was only in apartments, and they were most respectable people with whom she resided. Mrs Kirkbride had two boxes, both of which were placed on the stair landing near to her bed-room, and one of which, a large japanned round tin trunk, was fastened with a padlock.

The padlock was forcibly removed and the lid opened. Immediately this was done a most horrible stench was emitted from the contents of the box.  This as on the evening of Monday, and information was sent to the police of the discovery. The box was removed the same night by the police to the mortuary of  the West Derby  Local, Board, and the contents were thoroughly examined by Dr Pitts in the presence of inspector Walsh and Sergeant Shepherd. It was then found to contain the remains of three – what had been apparently – newly born infants. They, were each, wrapped in several folds of qheeting and pieces of carpet, and, a quantity of old rags and other materials were stuffed into the box so as to prevent any disagreeable ordour being emitted when it was closed. From inquiries which were made it appears, Mrs Elizabeth Kirkbride is a widow, having lost her husband in 1864. After his death she obtained her livelihood by teaching a school but latterly become involved in circumstances her goods were seized for debt, and she left Penrith for Liverpool in June last. She has four children, one of whom, the eldest, a young man 19 years of age, obtained a situation at Tuebrook, and came to Liverpool prior to his mother leaving Penrith. The young man engaged apartments, consisting of front parlour and front bedroom, at 21 Sutton Street, and his mother arrived soon after him. Inspector Walsh has ascertained that Mrs Kirkbride, on leaving Penrith, came at first to Aintree with two boxes, and left them there, either at the railway station. or at some private house. After staying at Aintree for some days, she left and went to Everton  where, after remaining for about it weeks she joined her son at 21 Sutton Street; Tuebrook. boxes were removed from Aintree to Tuebrook at the latter and of June. The people with whom Mrs Kirkbride lodged had not the slightest suspicion of anything being wrong, and had always looked upon her as a most respectable lady. She paid the rent of her apartments regularly, and occupied her time by doing fancy needlework. On the public searching her apartments several letters were found dated anterior to the time that she left Penrith, and which reveal the name of the person who is the father of the children, and who it is said is a respectable and well-to-do tradesman in the neighbourhood of Penrith. In the afternoon an inquest was held on the three bodies found at Tuebrook. The medical evidence was to the effect that the bodies were those children newly born and fully grown, but it could not be said whether or not they had lived, owing to the condition of the remains. One of the bodies had been there for 9 or 10 years, and another for about 6 years. An open verdict was returned.

Elizabeth Kirkbride, a widow, was again brought before the county magistrates at Liverpool on Saturday, Feb. 3, charged with concealing the birth of three of her illegitimate children. The prisoner was apprehended at Tuebrook, near Liverpool, under a warrant from Penrith, for concealing the birth of two children which were found in a box. She had previously admitted that all the children were hers, and she had concealed and neglected them, but denied having murdered any of them. Since then the body of another child, making six in all, has been found buried in a garden at Penrith.

Police-Inspector Walsh now stated that on Thursday evening week the prisoner sent for him, to her cell and told him in presence of two constables that the father of the children was Thomas Mort a tea, ham, and bacon dealer at Askham, near Penrith. He was the only an she had had anything to do with in any way, and it was only right that he should be exposed He had always promised to make her his wife, but instead of doing that when he was in a position to do so, he married another woman.

Superintendent Fowler, from Penrith, said, he held the warrant under which the prisoner was apprehended. The offences with which she was charged were committed in Cumberland. As the found in Liverpool were mere skeletons, there was no doubt the children were born years ago. It was, therefore, the opinion of the Clerk of the Peace  for that county that the prisoner should be taken there and tried for the offences. The Magistrates said that as the history of case began at Penrith, they thought it should be further investigated there, and accordingly the prisoner was handed over to Mr  Fowler for removal to Penrith. The case excited great interest, and a large crowd of at the entrance of the Court.

The police, in the course of their inquiries inspected the books of St. Pancras Burial Board and the registers of deaths, and it appears from these that Henney has not applied for any order for the burial of still-born child without the production of a medical certificate of attendance at the birth. The detectives have in their possession four medical certificates taken from. Henney, from doctors attending still-born cases, one of which is dated as far back as October 1876, but on searching the books it was found that Henney had paid no fees for the interment of still-born children since that date. Dr Hardwicke, the coroner, has inspected the remains, and has decided to hold an inquest on one of the bodies.

The prisoner was remanded by the Penrith Magistrates until Saturday.

FULL TEXT (Article 2 of 3): The horrible suspicion that the woman [Elizabeth] Kirkbride had improperly disposed of the bodies of no less than eight children of which she was the mother, is now realized almost to the fullest extent, another child in addition to the six already traced having been added to those that can be clearly accounted for. Strange to say, the latest discovery is, as in the case of the original disclosure of the frightful story, due to the agency of one of the sons of the accused, who now resides at or near Penrith. The publication of the shocking discoveries of the doings of Mrs. Kirkbride that have from time to time been made, has led to gossip and conjecture and aroused recollections that still further add evidence of the fact that the inhuman creature has committed the full series of revolting crimes she is believed guilty of. Her son referred to now remembers, and has so started to the authorities at Penrith, that some three or four years ago, while he and another brother were clearing out a lumber-room in the house in which they lived at Helton, they came across a parcel tied up in dirty cloth and rags. They threw it down stairs along with other rubbish, but before putting it away they had the curiosity to open it. It contained, as may be surmised, the body of a child, which, however, without saying anything more About it, the boys threw in the midden. Whether the remains have been traced further we do not learn, but that it was the body of a child there does not appear the least doubt. The parcel was made up in exactly the same way as those including all the bodies previously discovered, and the recollections of the boys as well as the circumstances point clearly to the conclusion named. It is not improbable that the eighth and last body may also be traced, and then it is hoped there will be an end to the sickening catalogue of horrors presented by this unparalleled case.

FULL TEXT (Article 3 of 3): The spring assizes of the County of Westmoreland were opened on Wednesday at Appleby, before Baron Huddleston.

In addressing the Grand Jury, his Lordship, on referring to the case of the murder and concealment of the bodies of the 6 infant children at Tuebrook, Penrith and elsewhere, observed that there had been a secret disposition of the bodies of the children, with intent to conceal the births, and there can be no doubt that there are some circumstances in the case, which would strike those who were entrusted with the administration of justice, as sufficient to warrant a more serious charge than that on which the prisoner was indicted. If she had imputed criminality to any other person, he need scarcely say that a statement from such a source should not be to readily accepted.

It was then arranged the case should be heard before Mr. Justice Manisty, who had not arrived from Carlisle until the next day.

The Grand Jury found a true bill in the case.

In the afternoon Elizabeth Kirkbride was placed at the bar. The accounts, three in number, having been read to her by the Clerk of Arraigns, the prisoner pleaded guilty to each.

At the Appleby Assizes on Thursday, Mrs. Kirkbride, who pleaded guilty on Wednesday, was brought up for sentence before Mr. Justice Manisty.

His Lordship addressed the prisoner in severe terms, saying she had pleaded guilty to the three indictments, knowing there was not a shadow of doubt as to the course with which she had pursued, and he feared she knew a great deal more.

Her conduct was almost incredible, the most inhuman that any human being could be guilty of. Both Baron Huddleston and himself had serious doubts whether she ought not to have been tried for murder. It was a case in which he must pass a more than ordinary sentence. The extreme punishment for one of concealment was 2 yrs hard labour, but he would sentence her to 9 mths hard labour for each indictment to which she had pleaded guilty, aggregated punishment being 2 yrs 3mths hard labour.

The prisoner, who manifested no emotion, was then removed. 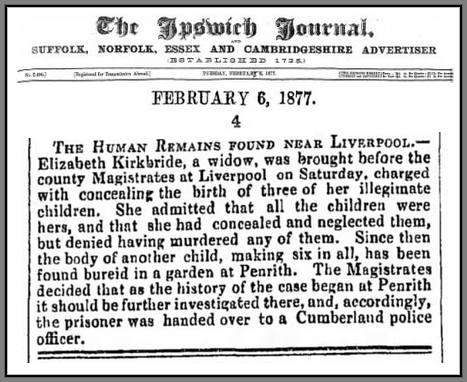