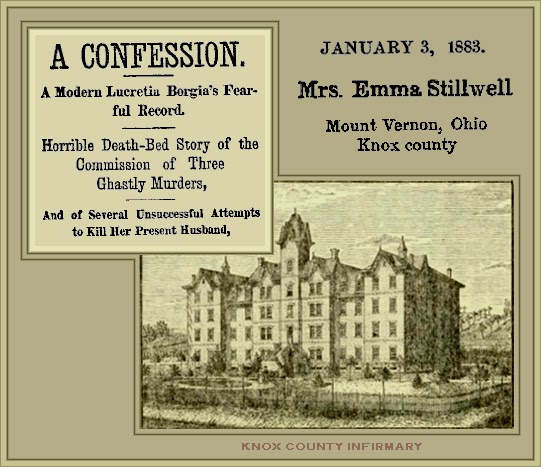 FULL TEXT: Cincinnati, Jan. 2.—The Enquirer has the following special from Mount Vernon, Ohio: Knox county has furnished some startling sensations to the world in the last few years, but nothing to equal what is about to be related, and, as the secret is confined in its sickening details to about half a dozen people, its appearance in The Enquirer yesterday morning when it reaches the readers here, will excite a feeling of horror, the intensity of which can scarcely be imagined. The terrible tale is told by a modern Lucretia Borgia, who, lying prone upon a bed of sickness, in the last stages of consumption, suffering untold anguish, from qualms of conscience, unburdens her mind and confesses to having murdered three persons and made several unsuccessful attempts upon the life of the fourth. The confession will also startle several communities in Missouri and Iowa, where the scenes of the tragedy are laid, and will unravel three separate mysteries of as many murders. The name of the self-accused murderess is Mrs. Emma Stillwell, wife of Jay V. Stillwell, who is her second husband, and is at present a freight conductor on the Chicago, Burlington & Quincy railroad.

About the middle of November last she came to Ohio to make a visit to her husband’s relatives in Middlebury township, Knox county. Being in feeble health at the time of her arrival she soon became prostrate upon her bed, and physicians who were called informed her friends that she was afflicted with quick consumption, and was not long for this world. Her husband was telegraphed for and came immediately home arriving December 16th. On the next day (Sunday) she called her husband to her bedside, and told him that as she had but a short time to live she desired to confess to him of her connection with three different murders, the victims being a former husband, a stranger, and the last her own child, aged about fourteen months. The distracted husband brought his father, Marion Stillwell, into the room, and the woman again narrated her terrible crimes. The elder Stillwell next day confided the story to four trustworthy neighbors, who went with him to his home and heard the confessions confirmed by the conscience-stricken woman.

For several days the neighbors discussed the terrible details, and as a result of their conferences Stillwell, sen., came to this city and consulted an attorney, who advised him to communicate with the authorities in Missouri, to verify the woman’s statements, which has been done, but as yet no reply received. Vague rumors reached the ears of The Enquirer correspondent in regard to the matter, which was being kept secret, and at an early hour yesterday morning, in company with three other gentlemen, he drove in a carriage to the Stillwell residence, which is situated about fourteen miles from here, and one mile west of Waterford, in Middleburg township. The house is a small story and a half structure, unpainted, located at the summit of a hill, surrounded by tumble-down fences, and approached by a steep roadway, with water-worn gullies. The elder Stillwell met the party cordially, one of the number being his legal adviser, and they were properly admitted. With the ceremony they were ushered into a room about ten by fourteen feet, in which was a large open fireplace, where burned a bright log fire. The room contained by two beds, on one of which lay the prostrate form of the unhappy woman, whose sands of life were fast running out, her bony hand crimson with the triple crime for which she will soon be called upon to render account at the judgment seat. She is a woman, perhaps, thirty years of age, with thin, straggling brown hair that hung in a confused mass about her wan and shrunken face, large, gray, restless eyes, sharp, aquiline nose, thin, colorless lips, which she kept tightly compressed, and when in the enjoyment of good health she stood about five feet two inches high, and weighed about 110 pounds. Her voice was so weak that she was powerless to articulate above a whisper.

At first she was loth to speak and seemed greatly agitated, fearing that the strangers were a party of officers come to arrest her for the terrible crimes. Her confidence being restored, she reiterated her confession, in substance as follows: My maiden name was Emma Hoard; was born at Niles, Mich., and at fifteen years of age was married to Benjamin Swigart at Maryville, the county seat of Nodaway county, Mo. Two children were born to them, who still living at Maryville with her brother, Lester Hoard, and are aged six and eight years. Swigart was a shoemaker, and had accumulated $1,000 in money, besides two houses and eight lots. He was strongly addicted to drinking, and came home intoxicated frequently. In March, 1877, she claims that her mother and brother, Chester Hoard, entered into a conspiracy to get him out of the way and secure his property; that he came home drunk one night that her brother threw him upon his face on the floor, when she struck him on the back of the head with an ax, breaking his skull. They then laid him on the bed and left the house. She then took her two children and went to the house of a neighbor named Hall, where she remained all night. The next day Swigart’s death became known, and the three were arrested for the crime, had a hearing before a magistrate, and they were discharged, the verdict being that deceased met his death by accident, while intoxicated.

Then they kept a boarding-house, and several months after the above crime the mother, brother and sister again combined to kill a stranger who was temporarily stopping at the house, and supposed to have money. Getting into his room, they beat him to death with a hammer, but were rewarded by finding only a small sum of money. Near by was a ravine 100 feet deep, where they concealed the remains, which were found nearly one year after and, but so badly decomposed as to be beyond identification. No arrests for this murder were ever made, and the tragedy is still a mystery.

On Jan. 20, 1878, at Rockport, Atchison county, Missouri, Mrs. Swigart was married to Jay V. Stillwell who, at the time, was a brakeman on the Kansas City & St. Joe railroad. Two children were born to them. On May 11, 1880, Mrs. Stillwell, who had taken an intense dislike to Gertie, the eldest, aged fourteen months, on account of it being sickly and puny, strangled it to death in the presence of her mother, after giving it a decoction of steeped peach leaves. The family were then living at Rulo, Nebraska. Stillwell was then running on the Atchison & Nebraska, and on coming home the unnatural mother informed him Gertie had died a natural death.

She next confessed to having been concerned in the three separate attempts to kill her present husband, to secure his life insurance and about $500 he possessed, in which she was to have been aided by her mother and brother Chester. The Stillwells, removed to Ottumwa, Iowa in March, 1881. Mrs. Hoard, who was on her way to visit her daughter, received injuries in a railroad accident, and was severely burned by a stove falling upon her, receiving injuries from which she died at Stillwell’s house about four months later.

The other accomplice in the crimes, Chester Hoard, is at present living in Maryville. A. letter received from him by Marion Stillwell, dated Dec. 20, says:

“I write you a few lines to know if my sister is alive, as I heard from Ottumwa that she was dead.”

Here follows information about the two children of his sisters in his charge, when he concludes:

“Mr. Stillwell, if my poor sister is dead let me know as soon as possible, for it worries me so much I can not rest. Tell me what she said about me, or if she wanted me to do anything for the boys; or did she speak of me at all?”

He then sends a message to his brother-in-law that he never laid a stone in his way, and he hopes he has no hard feelings against him. This letter is construed to indicate grave anxiety upon the part of Hoard, and being strong circumstantial evidence of the truth of his sister’s confession.

[“A Confession. - A Modern Lucretia Borgia's Fearful Record.- Horrible Death-Bed Story of the Commission of Three Ghastly Murders, And of Several Unsuccessful Attempts to Kill Her Present Husband, - Implicating Her Mother and Brother in the Perpetration, of the Terrible Crimes.” Jan. 3, 1883, p. 1] 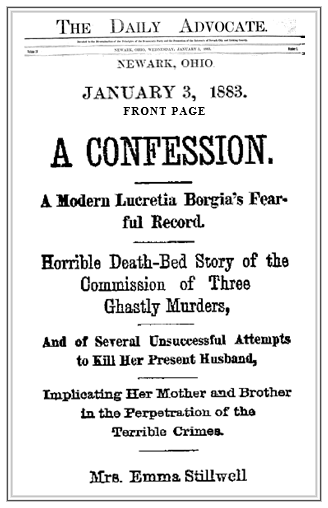