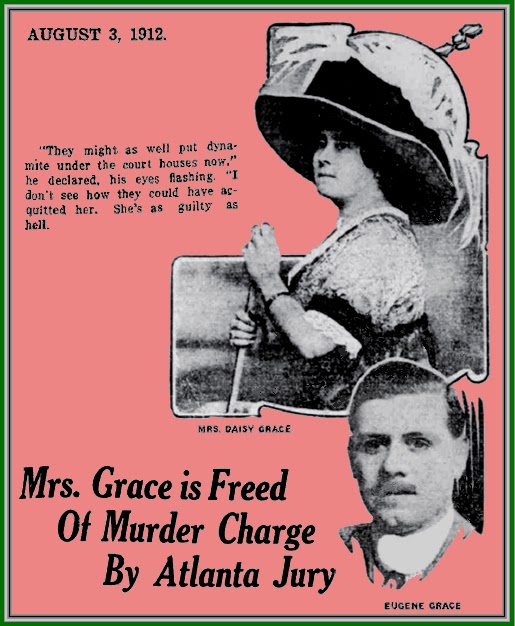 FULL TEXT: Atlanta, Ga., Aug. 2.—”Not guilty,” laconically said the foreman of the Jury called to pass upon the charge that Mrs. Daisy Opie Grace had drugged and shot her husband, Eugene Grace. For a moment there was intense, painful silence.

“Daisy of the Leopard Spots,” who, with the histrionic ability of a finished actress, had unfalteringly recited her 8,000 word statement to the jury, went white to the roots of her hair. She swayed for a moment as if on the verge of collapse.

Her attorney gently patted her on the shoulder and whispered words of encouragement. A flood of rich, red blood again surged through her veins, and a pink flush infused her cheeks.

A throng, which packed the court room to the doors, and which watched with silence upon the little drama before the bar of the Court, then burst into wild and unrestrained cheers.

The defendant then approached the 12 jurors.

“God bless you, gentlemen!” she exclaimed as tears of joy welled up in her expressive eyes and coursed down her cheeks.

“I feel like kissing and hugging you all,” she said “I trusted you all the time. I knew you would not believe what they said about me.”

Followed by a cheering throng, Mrs. Grace soon left the court room and went to the offices of her attorneys.

It developed that Mrs. Grace’s remarkable story of the shooting of her husband  as a carefully prepared declamation, pruned, amended and polished by her lawyers and as carefully rehearsed as s dramatic offering by a professional actress. For over two months Mrs. Grace rehearsed the statement until she was letter perfect. There are 8,000 words in the statement, but she never faltered once during its delivery, although her husband, paralyzed from the wound are was accused of inflicting, gazed during its recital with a cynical grin.

The case was given to the jury at 2:30 by Judge Roan, whose charge favored Mrs. Grace.  The jurors ate dinner and about 3:30 began consideration of the case. After a little discussion it was found they all agreed Mrs. Grace was not guilty, and the verdict of acquittal was ordered at 4 40.

Grace was not in Court. He as taken back to his home in Newnan last night and there heard of the verdict this afternoon

Newnan, Ga., Aug. 3.—Lying helpless from paralysis, but with anger so great that he strove to twist his helpless body, Eugene H. Grace today bitterly denounced the verdict that acquitted his wife of the charge of attempting to murder him.

“They might as well put dynamite under the court houses now,” he declared, his eyes flashing. “I don’t see how they could have acquitted her. She’s as guilty as hell.”

“I will stick to my original story. She shot me sometime between one and six o’clock as I lay asleep. We had no quarrel, whatever.”

“Just before we went to sleep, I kissed her. When I came to, I felt that dull pain in my side and after she loft the room I found I was shot. Her statement as to how it happened is a pack of infamous lies.”