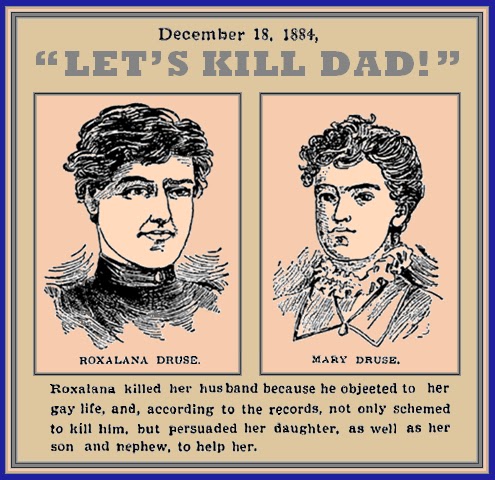 FULL TEXT: Recorder Goff of New York and a jury have decided that Maria Barberi must die in the electrical chair at Sing Sing because she murdered her faithless lover. If she is killed according xo law, as it is now interpreted, she will be the first woman to die in the electrical chair, as well as the first female who has been lawfully executed in New York State since February 23, 1887.

Strange as it may seem, Roxalana Druse, who was hanged in the jail at Herkimer, N. Y., on the last day of February, 1887, acted much the same as Maria has done. At times Roxalana was calm and then she broke out into violent fits of weeping and ejaculations, just as Maria does. After Maria heard the verdict of the jury she became silent and seemed not to understand her position, but subsequently gave way to her feelings while confined in her cell at the Tombs and wept like a child. Maria killed her lover because he would not marry hor. Roxalana killed her husband because he objected to her gay life, and, according to the records, not only schemed !o kill him, but persuaded her daughter, as well us her son and nephew, to help her.

The execution of Roxalana Druse was one of the most sensational in the history of the civilized world. Thirty-three years had elapsed since a woman had been hanged in New York State, and, although no outsiders were permitted to see the execution, thousands of men, women and children gathered about the prison at Herkimer “just to hear the woman yell,” as they said. They only said so in a joke, but. as it happened, the woman did yell, and the curious crowd went away satisfied. She never confessed that she murdered her husband, who was fifteen years her senior, but the evidence proved that she did. The daughter, who was sentenced to prison for life for having a hand in the murder, was pardoned a few months ago. 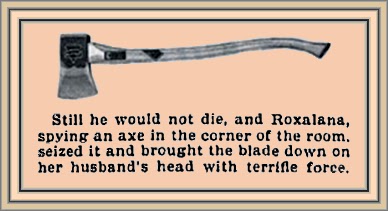 Years ago Roxalana Druse was known as Roxie Tefft, the prettiest girl in or about Herkimer. All the boys tried to make love to her, but she would have nothing to do with them, and everybody was surprised when she married old Farmer Druse. They went to live in Herkimer, and for years were considered to be the best mated couple In the neighborhood. A girl baby was born to them and they named her Mary. Mary inherited her mother’s disposition, and when she grew up they became great chums. The little house in which they lived became the scene of nightly revelry, which did not please old Druse a bit.

On the morning of December 18, 1881, after Roxalana, her good-looking daughter and several friends had enjoyed themselves until day was breaking, the husband became rather cross at the breakfast table. He found fault with everything. According to the evidence his wife had been waiting for just such an occasion. She ordered her son and nephew, Frank Gates, out of the house. Her daughter Mary remained with her. The boys said they heard a shot a few moments after they had left the house, and hurried back to see what it all meant. The boys found the old man sitting in a chair with his head hanging down on his breast. Beside him stood his wife with a pistol in her hand, while the daughter, a few feet away, was preparing a rope for her father’s neck, in case the bullets did not prove fatal. 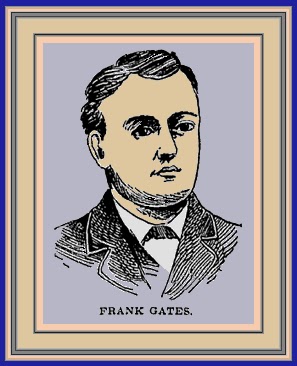 \Mrs. Druse, it is said, handed the pistol to Gates and ordered him to shoot the old man again.

“What’s, the use? He’s dead now,” remarked the nephew.

“Never mind, go ahead and shoot!”

The nephew did shoot, and then the wife and mother persuaded her daughter to put a shot Into the old man’s body.

Still he would not die, and Roxalana, spying an axe in the corner of the room, seized it and brought the blade down on her husband’s head with terrific force. As it happened, the axe glanced and only chopped off a few inches of the scalp.

But Roxie did not heed him, and brought the ax down on his head again, silencing him forever. Still she was not satisfied, and, grasping the ax handle with the strength of a giantess, brought the blade down on his neck with such force that his head was completely severed from his body. The head rolled over on the floor. The wife, daughter and nephew stood aside for a few moments, while Roxalana, seemingly crazed by the sight of her husband’s blood, grabbed the head, and dashed it at the body; the blood on her hands seemed to intensify her feeling to do more murder; and she smeared the crimson fluid over the face of her daughter in the room where the murder took place the murdered man had built a roaring fire on which the breakfast was cooked, and the fire was still burning merrily. There was nothing more to do but get rid of the body. With as much deliberation as though she was chopping the knots of a log, Roxalana picked up the bloody ax, and measuring the length of the stove with her eye, proceeded to chop her husband’s body into lengths which would fit. The head was off, to be sure, but the arms and the rest or the body were still intact. A few strokes of the ax severed the arms and legs from the trunk. The legs, however, were a little too long and had to be cut in two. The limbs were stuffed into the fire, but the trunk of the body remained, and it was split up into four sections.

While this bloody work was in progress there was a knock at the door, but the neighbor who called to pay his respects received no answer and went on his way. Contrary to expectations, instead of the fire burning up the body, the body put the fire out, and after all the trouble, the charred chunks of flesh had to be wrapped up in paper and carried out into an adjoining room for safe keeping. The wife informed all the witnesses of the murder that they should say her husband had gone to New York on business. This excuse was accepted for two weeks or more, and then the gossips of Herkimer began to tell stories of how “Old Bill” had been done away with at one of “Roxie’s parties.” It was all a joke at first, and the persons who repeated the improvised story little thought that they were telling a portion of the truth.

The remnants of the body were allowed to remain in the barley bin just outside of the house for several days. Then they were loaded in a sleigh and carried several miles into the country and deposited in a running brook half covered with ice.

A month after “Old Bill” was murdered investigations as to his whereabouts caused the entire family to be arrested. All were charged with the murder. Little by little confessions were obtained, and finally the wife was condemned to die. 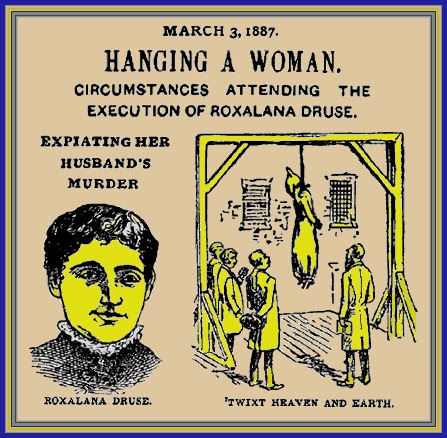 The lawyers for the defense did all in their power to save her, but the judges to whom they appealed refused to grant a release, and after months of prison life Roxalana was hanged. Until the time she broke down on the way to the gallows she firmly believed that her sentence would be commuted to imprisonment for life, and the night before the day of execution she tried to sleep, expecting that she would be awakened by the announcement of the commutation. It was a windy night, and the noise of the storm, with the shrieks of whistles of the passing trains woke the woman shortly before 2 o’clock. She asked the time and then sat down at the little table in her cell where she wrote letters until long after daybreak. She wrote to all her relatives, and was still writing when Sheriff Cook came to read the death sentence.

When he entered her cell the unfortunate woman threw up her hands and began to cry so loudly that the sheriff’s voice, reading the death warrant, could hardly be heard. She begged that her life might be spared at one moment and then said it was no more than right to hang the next.

The attendants had grown to like, or rather sympathize with the unfortunate woman, but they could do nothing for her. About 7 o’clock in the morning a letter and a bouquet came from the woman’s daughter. Notwithstanding the details of the horrible crime, it seemed hard to execute the woman, as far as those in the prison were concerned. But to those without the prison the execution seemed not only just but a “good thing.”

Roxalana had to be supported as she walked through the snow to the gallows, and when on the instrument of death she lost her entire self-control. She had to be supported while the hangman’s assistants strapped her legs together and bound her arms behind her back.

When the black cap was drawn down over her face she fought like a tigress, and would have bitten the attendants had such a thing been possible. During all this struggling a minister of the gospel stood beside the murderess and prayed for her. His prayer was lung, but she seemed not to need what he was saying, and clutched at everything and everybody near her.

The jeering crowd outside the prison walls heard the dying woman’s shrieks and seemed to consider them as humorous.

The rope did not break her neck. She was strangled to death and her face after the body was cut down, showed that she had suffered terrible agony.

According to the official records only five woman have been legally executed in this state.