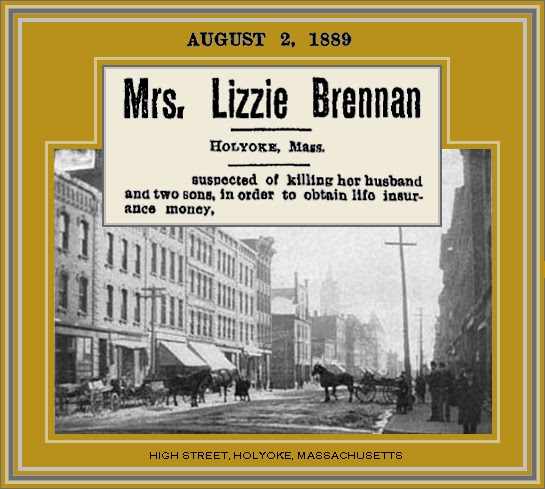 FULL TEXT (Article 1 of 3): Holyoke, Mass., June 27. – There is under arrest in this city a woman to whom suspicion points as being an infamous rival to Mrs. Whiteling, who was hanged in Philadelphia Tuesday, for the poisoning of her husband and two children. Mrs. Lizzie Brennan, widow of Michael Brennan, is charged with poisoning her son, Edward Brennan, who died yesterday. Her husband died nine months ago in a sudden manner, and another son, named Michael, died six weeks ago, from what when thought to be sunstroke.

It is now thought that all three were poisoned by her so that she might secure the heavy insurances which she carried on them. The facts in the case certainly seem to justify the suspicion. The family of ten in all moved here about four years ago from Middletown, Conn. They are poor people, and worked in the mills. The father, Michael, was much older than his wife, he being 70 years old and almost 50. he was an inoffensive man, but Mrs. Brennan seemed to be unable, at one period at least, to keep on good terms with her neighbors, as she was in the police court either as complainant or defendant in assault cases quite  often. Nine months ago her husband died, as stated, quite suddenly. This aroused some comment, which was quieted, however, when the information was given that his death resulted from sunstroke.

Yesterday, another son, Thomas, who has been ailing for a week, expired, and the old suspicion that all was not right became rife. These suspicions were greatly strengthened when it became rife. These suspicions were greatly strengthened when it became known that Mrs. Brennan had the lives of the father and sons insured, and, considering the poverty of the family, for heavy amounts, it being said that at least $3300 was placed on the three lives. The doctors who attended Thomas reported to the medical examiner their suspicions that their patient died from arsenical poisoning, in consequence of whivh Medical Examiner Tuttle forbade the undertaker doing any work on the corpse, and, reporting the facts to the police authorities, Chief Whitcomb placed Mrs. Brennan under arrest. As she is suffering from heart trouble she is being kept under surveillance at her home.

A reporter called on Mrs. Brennan and was told the story of Thomas’ illness and deaths briefly as follows: Two weeks ago he came home sick, and did nothing for several days. Last Thursday he took a walk into the country, returning home at 11:30 a. m., and asked for his dinner, saying the country air did him good. His mother gave him his dinner, after which he went out, not returning until 6 o’clock. She asked him to have supper, but he declined as he felt sick. He laid down on the lunge and remained there all night. In the morning Mrs. Brennan got him to bed, and asked him to have a cup of milk. He refused it, and asked for a cup of tea with tobacco in it. She told him there was no tobacco in it, it was the same as they all had had. He took another drink and threw that off also, and since then, except on Sunday, he could keep nothing on his stomach. Monday he became delirious, was raging and died while in that condition.

FULL TEXT (Article 2 of 3): Holyoke, Mass., Aug. 2.— Mrs. Lizzie Brennan, the woman accused of poisoning her son, Thomas Brennan, and suspected of murdering in the same manner her husband and son, Michael, was today removed from her home to the police station.

At 10 o’clock she was arraigned in the Police Court. Through her counsel, Lawyer Brooks, she waived the reading of the complaint and pleaded “not guilty.”

Mrs. Brennan sat in the dock with her older daughter, Mary, who affectionately
entwined her arms around her unfortunate mother’s neck.

The prisoner was calm and collected, and if she was stirred by emotion her firm countenance did not betray her agitation.

By request of her counsel the hearing was continued until next Friday. The woman was then looked up, while her daughter stood at the door wailing piteously.

Chief of Police Whitcomb this morning expressed confidence that the Commonwealth had scoured sufficient evidence to hold Mrs. Brennan for the grand jury. Judge Pearsons has not yet rendered t he verdict of the inquest, but says that he will do so next Thursday,

The woman was taken to the Springfield jail this afternoon to await the hearing in this city next Friday.

[“Behind Bars, Mrs. Lizzie Brennan Is Placed, For Alleged Poisoning of Her Son. - In Court at Holyoke She was Calm and Composed. - Was Pleads Not Guilty and Case is Continued. - Her Daughter Wails Piteously She is Locked Up.” The Boston Daily Globe (Ma.), Aug. 2, 1889, p. 1]

FULL TEXT (Article 3 of 3): Holyoke, Mass.. Sept. 27.—Simultaneously with the grand jury's finding of a true bill against Mrs. Lizzie Brennan, the alleged murderess, this afternoon, Judge Pearson makes known the verdict of the inquest, which unequivocally states that she caused the death of Thomas Brennan by administering to him arsenical poison.

FULL TEXT (Article 3 of 3): Springfield, Mass., Jan. 4.—Mrs. Lizzie Brennan, under indictment for murder, for poisoning her son, Thomas, last summer, at Holyoke, for his life insurance, died at the county jail in this city yesterday from Bright's disease.

NOTE: Some reports have the spelling “Brenan.”