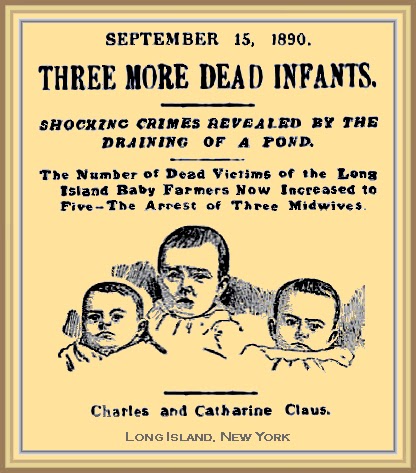 FULL TEXT: The evidence against Charles and Catherine Claus the Maspeth baby farmers is increasing and today revelation are of a most character. At an early hour people began to gather around the hovel from which the old couple were arrested and at no time during the day was there less than 600 people present and at one time more than 2000. On Saturday evening Justice McDonald Maspeth concluded to have a large bog pond in the dense wood, in the rear of Clause’s house drained. The Maspeth Steam Fire Engine Company 4 volunteered to give the use of their engine, and early this morning the steamer in command of Foreman Montaverde was taken to the pond.

It was not until after three hours work that anything of an unusual character was discovered. County Superintendent of the Poor Jeromus Rapelye, while raking the bottom of the pond at that time, brought to the surface a small bundle and without attracting the attention of the crowd carried it to a retired spot and opened it in the presence of some of town officials. It was found to contain the body of an infant about one month old done up in a piece of white cloth with a quantity of quick lime. It was in an advanced state of decomposition and an autopsy probably will not be made. The finding of this body was followed shortly afterward by the discovery of a large tin kettle to which a stone weighing not less than five pounds was attached. In the kettle was the body of another infant.

Just before dark the steamer was obliged to cease operations on account of the suction hose being too short and work was about to be abandoned until tomorrow when a third and last body was discovered.

It is expected that tomorrow when the water in the pond is exhausted more bodies will be found in the immediate neighborhood there are several smaller ponds and in all probability Chief Engineer McDonald of the Newtown Fire Department will call upon the two steam fire engine companies of the town of Newtown to drain them. At about 2 o’clock Coroner John Romorer arrived on the spot and remained until after the finding of the third body, when all the bodies were taken by the Coroner’s undertaker to the Morgue.

Mrs. Clauss’s statement which implicated the three midwifes who wore arrested this morning has been followed by admissions which will undoubtedly lead to the arrest of other midwives in New York who it is alleged nave hired Mrs. Claus to take infants.

Mrs. Karch of 1620 First avenue, Mrs. Scheuber of 318 Fast Flttyilxth street and Mrs. Warner of East Nineteenth New York, three of the midwives implicated in the confessions of the Clauses were arrested at their homes on Saturday night by Deputy Sheriffs Hilland, Holdsworth, and of Newtown. Detective Sergeant Crowly of New York sided in the arrests Justice McMahon of the Yorkville Police Court turned the prisoners over Long Island authorities. They arrived in Newtown about midnight on Saturday night and were arraigned before Justice Scheuber and held for examination tomorrow at 10 o’clock. They are accused of being accessories to the abandoning of infants.

The three women protest their innocence. They assert they simply recommended their patient the Claus family and allowed them what arrangements they chose. Mrs. Karch is the only one of the three women who has been seen in Maspeth. She then had a child in her arms. Constable Quis of Winfield followed her to the Claus house and from there to Williamsburg, where he attempted to have her arrested, but the sergeant at the Graham avenue police station refused to hold her.

The Clauses are now on the Queens county jail Long Island City. Their son Otto who was instrumental in obtaining a confession from them, returned on Saturday night to the house on the edge of Maurice’s woods, near Fisk avenue from which his father and mother had been taken away prisoners the day before The bodies of the two dead infants found in the were turned over Coroner Homeyer. Dr. Wickham said that the dead child found in the crib at the time of the arrest had died of starvation. The body of the other dead child found between the mattresses of the bed the day following is said to have died of improper nourishment.

The pond in which the three bodies were found to-day was covered with green slime. It is a deep hollow and the heavy foliage on the surrounding trees gives it a dark and suggestive look.  Immediately on the arrest of the Clauses and the finding of the dead infants in their house this pond became an object of suspicion to all concerned in the case.

When the Claus family lived in 131 Webster avenue, Ravenswood Long Island City, Police Sergeant Thomas Darcey of the First precinct of that city had the house under surveillance for more than a month. He wanted to take no risk of their escaping justice and was lying in wait to catch some one of the family in the act of disposing of a child. Becoming suspicious, the family left Long Island City one morning. Sergeant Darcey had a detective watching the house. He followed the wagon containing the household goods and traced them to the new house in Masbeth which Claus had just finished. Sergeant Darcy then notified the Newtown officials of the probable character of the new residents and a watch was set on them. They had been in their new quarters hardly a week when a baby was found on the steps of the Dominican Sisters Home in Winfield. Two weeks ago Grocer Theodore Christman found a girl by in a soap box on his front stoop. More than forty abandoned infants were picked up in Long Island City during the past year. At one time suspicion pointed toward colored family named Purcell living near the precinct station in Ravenswood. Several live children were found in their house when the family were arrested. The only complaint that could be made against them was keeping a baby without license. They were fined and discharged. A midwife who attempted to take one of the infants away from the house, after the arrest, was arrested accused of attempting to kidnap the child. No case was made out against her and she was discharged.

In their confession the Clauses say that they have made a business of baby farming for more than twenty years. The prices they received to the means of the mother of the child. The medicine administered to the infants was generally supplied by the midwives although the mother of the child was willing to pay for the services of some resident physician were obtained in cases of necessity.

At the time of the arrest on Friday the mother of the dead child found in the crib was in the house. She paid the Clauses an extra $10 for the earn of her dead babe and hired Undertaker Skelton to see that it was properly buried.

[“Three More Dead Infants. – Shocking Crimes Revealed By The Draining Of A Pond. – The Number of Dead Victims of the Long Island Baby Farmers Now Increased to Five – The Arrest of the Midwives.” The Sun (New York, N.Y.), Sep. 15, 1890, p. 3]

FULL TEXT: Maspeth, L. I., Sept. 15. – The dead bodies of three infants were yesterday taken out of the pond behind the house of Charles and Catherine Claus, the baby farmers. The search is still going on. Mrs. Claus was heard to exclaim in the jail at Newtown: I’ve put away fifteen, but let them find them.” 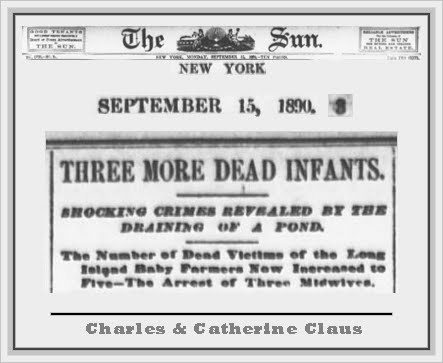 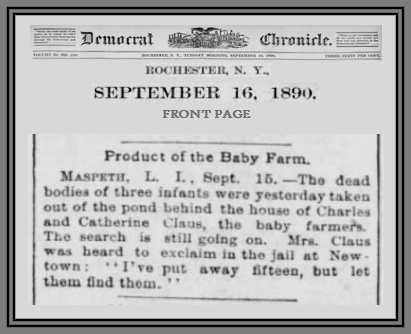