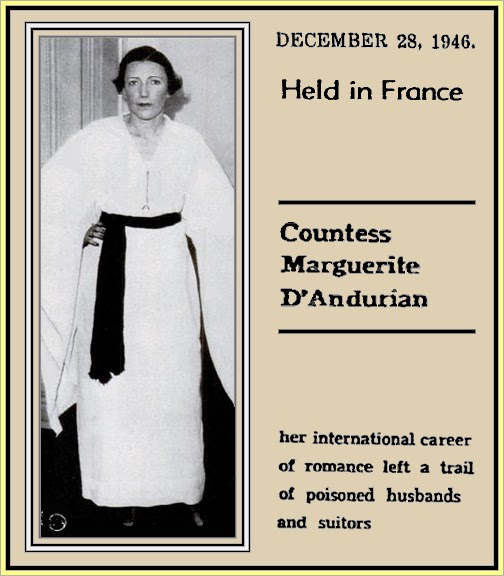 FULL TEXT (Article 1 of 4): The Countess Marguerite D'Andurian, pictured above in France in 1933, is held by French national police at Nice for questioning in the poisoned candy death of her cousin in 1945. The countess, whose international career of romance left a trail of poisoned husbands and suitors, once escaped being stoned to death only by intervention of King Ibn Saud of Arabia.

FULL TEXT (Article 2 of 4): Paris, Dec. 26 – The Countess Marguerite d'Andurian, almost as fabulous a character as her old friend, the late T. E. Lawrence of Arabia, was held in Nice Thursday for questioning about the death of her cousin, Raymond Clerisse. He died in 1945 from eating poisoned candy.

The countess is 51, but her charms are still such that she has no lack of admirers. A few years ago, a Major Sinclair was said to have committed suicide in the near east because she refused to take him seriously.

She was arrested Wednesday by the surete nationale on suspicion of having done some gold smuggling. A few gold pieces were reported to have been found in her room, but not enough to prove anything.

She was supposed to have been brought to Paris Thursday, but at last report she was still held in the headquarters of the surete nationale in Nice. Commissioner Pierre Coutant, who had spent a year investigating her in north Africa and the near east, wanted to ask her a few more questions about her cousin's death.

Her cousin Clarisse, 26, a lawyer, died on Nov. 22, 1945, and the countess was picked up a few days later. She was questioned and released.

She is said to have met Lawrence during the first world war when she owned the Queen Zenobie hotel at Palmyra, in the Levant Tates, and he was organizing the Arabs for guerrilla war against the central powers.

In 1934, she disguised herself as a man and tried to get into the sacred mosque at Mecca, which women are forbidden to enter. About this time, she divorced the Count d'Andurian and married an Arabian shiek.

The shiek died of poison and she was condemned to be atoned to death. But before the sentence could be executed, she was pardoned by King Ibn Saud at the request of the French consul.

The consul's son was said to have been in love with her. As soon as the Arabs let her go, she returned to Palmyra and remarried the Count d'Andurian. The count soon died of poisoning, and she was a widow again. [Other reports state he was stabbed multiple times.] 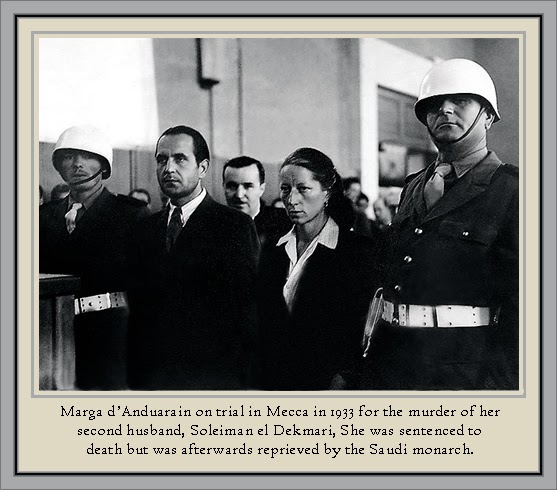 EXCERPT (Article 3 of 4):: The last figure we are dealing with is a noble woman, who leaves behind a long trail of blood. The wildness of Jeanne Claire Marguerite Clarisse was apparently shaped by her having resided since early age within the confines of five convents,  with their ambiguous sexual mores.

At the age of eighteen she married the Count of Andurian. They took  a long honeymoon exploring the Middle East, eventually resting at Palmyra, Syria, where they took charge of a hotel which the managed together.

She made the acquaintance, W. F. Sinclair, head of British intelligence in Haifa (Palestine), from whom she stole classified documents, leading to his suicide.

After the Normandy invasion the air got too hot for such delicate skin as hers, so she moved first to Spain, then Tangier and finally to Gibraltar where she spends her life  enjoying luxurious parties. At the end of one of these romps she was be found dead: strangled with a silk scarf. Her murderer, Hans Abel was a young German was apprehended, but his motive was never disclosed.

[Enrico Gavassino, “Madames of the Gestapo,” undated, in Italian, accessed 2012] 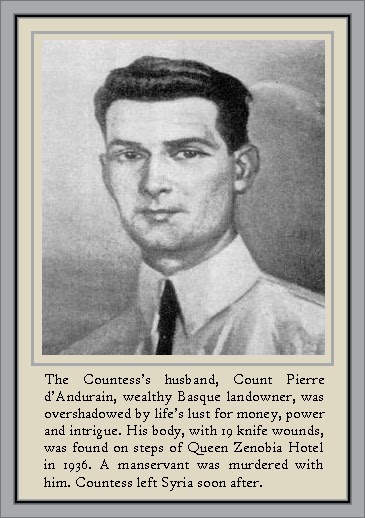 FULL TEXT (Article 4 of 4): Eight cryptic words, scrawled on the back of a Paris subway ticket by a dying man, led last month to the arrest of one of the most fabulous beauties of the Middle East. The words – “Candy which Marga gave me had a strange taste” – were written in November 1945 by 26-year-old Raymond Clarisse. The beauty, 51-year-old Countess Marga d’Andurain, was arrested for poisoning Raymond, her nephew.

This was just another episode in the life of Countess D’Andurain, whose mysterious career has included more loves, murders and hair’s breadth escapes than the plot of a grade-B movie. When the police arrested her, she was a slender, dark-eyed average-appearing woman who seemed little the worse for her experiences. Her looks were faintly reminiscent of the beauty which had given her the title of Queen of the Desert. Newspapers called her “a character out of “Arsenic and Old Lace,” because “wherever Marga went, death struck almost immediately.” Her hectic story started in provincial Boyonne where she was born and where she married wealthy Count Pierre D’Andurain. Stong-willed and romantic, Marga persuaded her mild, meek husband to settle in Palmyra, Syria. There she soon turned his Queen Zenobia Hotel into a nest of intrigue by flirting with local sheiks and colonial officials. By 1932 she became so enamored of the lm world that she claimed conversion to Islam, divorced her husband, married a Bedouin tribesman and started a pilgrimage to Mecca. But between Jidda and Mecca she was kidnapped by her new husband’s tribe, which was angered at his marriage to an infidel. Then, during their captivity the mountains, her husband was poisoned. The countess was found guilty by a tribal court and sentenced to be stoned to death. The French interceded with King Ibn Saud, however, and she was freed. 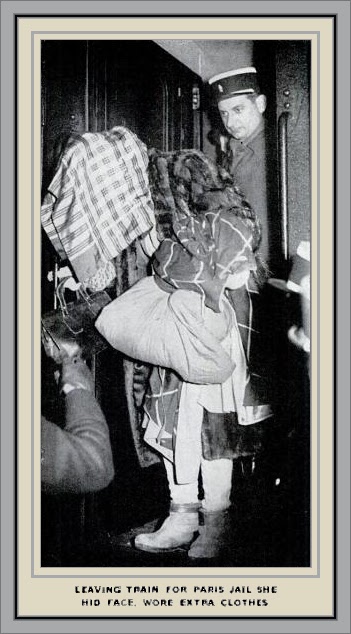 Back in Palmyra she remarried Count Pierre, who a few weeks later was stabbed to death in the Zenobia Hotel. Authorities investigated but could prove nothing. Shortly before the war she went back to France and after the German occupation moved to an apartment in Paris where her nephew Raymond was a frequent visitor. Just as he was leaving the apartment one day she playfully popped a piece of candy in his mouth. By the time he got home violent cramps seized him and his agonized last words started the police investigation. When they arrested her in Nice, she had rented a deserted house and was decorating it with mementos of her career.

Last month the countess, swathed in ancient furs, wearing long woolen drawers and hiding her face, was hustled off to a Paris jail protesting innocence. So far no sheik has appeared to save her.

***
NOTE: Countess d’Andurain’s execution by hanging was erroneously reported by United Press in newspapers on June 2, 1933. 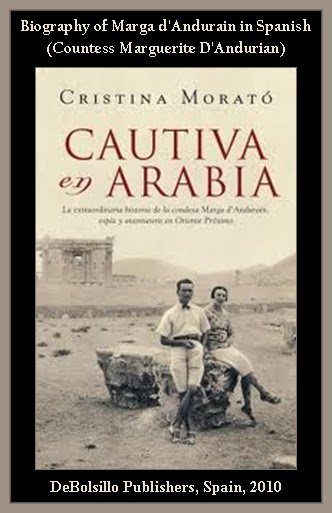