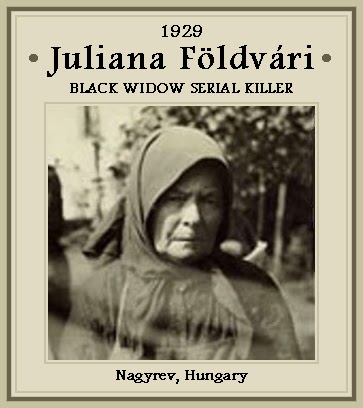 Note: Some sources use the spelling “Foldvari.” The proper Hungarian spelling is Juliana Földvári.

FULL TEXT (Article 1 of 2): Budapest, Hungary, Jan. 17 – Prosecution of thirty-six women charged with mass murder of relatives and lovers was resumed at Szolnok today when one of the riches and most attractive women of the village of Nagyrev, Mrs. Charles Foeldvary, went on trial for her life. Mrs. Foeldvary, widow of a wealthy farmer, was charged with poisoning her husband, mother and her lover Ladislas Toth.

Her co-defendant was Mrs. Michael Kardos, also a rich widow, who was accused of murdering her husband, her son and the husband of another woman defendant in the cases. She had a love affair with the woman's husband.

The first trials of the thirty-six women resulted in sentencing of Juliane Lipka, 66, to death for murder and sentencing of three other peasant women to life imprisonment. Authorities blamed love affairs with youths and a greed for property of relatives for the many murders. One defendant later was freed. 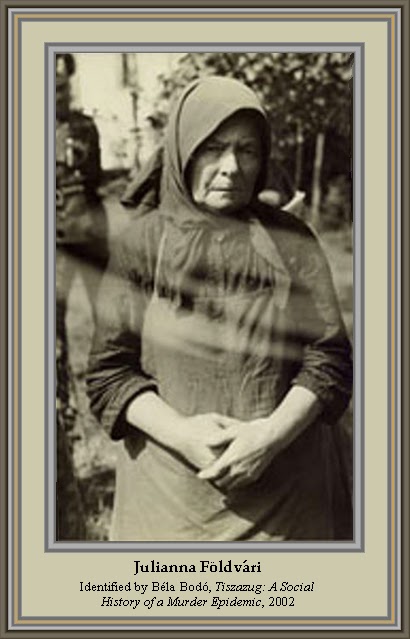 FULL TEXT (Article 2 of 2): Szolonok, Hungary, Jan. 1. – The trial of forty alleged poisoners of the little Hungarian hamlets of Mahyrev and Tizakurt reached its highest point of dramatic interest to day when Maria Kardos was accused of the murder of her own son and husband and the attempted murder of the husband of her friend, Juliana Foldvari, and Juliana Foldvari was charged with poisoning her husband, lover and mother.

These two women known in their youth as the belles of the district, are still among its wealthiest inhabitants. In contrast with the half dozen peasant women already tried they exhibited in their more intelligent features, more correct accents and more fashionable garb a degree of refinement and culture which threw into stronger relief the medieval crudity of the crimes of which they are accused. That the accusations are well-founded, however, was shown by the admission of Mme. Kardos under the strain of to-day’s cross-examination of her responsibility for poisoning her husband and son.

Mme. Kardos appeared in court in black with silk stockings and patent leather shoes. She was depicted by police accounts as a vital, passionate figure who combined a certain longing for city refinements with rural coarseness in the indulgence of unbridled desires.

After marrying and divorcing two husbands Mme. Kardos found herself, at age of 40 with a 22-year-old son. As his bad health made him a burden whose existence interfered with the mother’s pleasures, she enlisted for £100 the services of “Aunt Suzi” the midwife who is alleged to have been the inspiration for most of the sixty poisonings supposed to have occurred.

After a first dose of poison the son grew ill. Mme. Kardos had his bed moved outside one fine Autumn day. Then, in her own words, “I gave him more poison in his medicine. Suddenly I remembered how splendidly my boy used to sing in church so I said “Sing my boy! Sing me my favorite song!” He sang it with his lovely, clear voice, then suddenly he cried out, gripped his stomach, gasped and he was dead.

Mme. Kardos then remarried, but on being threatened with divorce by her husband she obtained another dose of arsenic from the midwife, who charged her nothing this time, as she herself was eager for revenge against the husband, who had once been her own lover, and got rid of him by more summary means. This murder she also admitted in court today.

Juliana Foldvari, who is 49 years old, four years younger than Mme. Kardos, flatly denied today the three charges against her. The first is that she poisoned her old mother, from whom she had had large property expectations, but with whom she lived in none too friendly relations, by inducing her to eat cookies filled with arsenic. The old woman died in great agony.

After providing an imposing funeral the daughter erected a gravestone with the epitaph “Here lies she whom I most loved.”

Two years later Mme. Foldvari’s first husband died suddenly. On exhumation traces of arsenic were found in his body. Another two years and another victim followed, this time Ladislaus Toth, with whom she had lived as common-law wife.

After partaking of soup which Mme. Foldvari had sent him when he was at work in the fields, Toth died in great agony. His exhumation also revealed the presence of arsenic.

In to-day’s hearing Mme. Foldvari denied all previous admissions. When reminded by the prosecutor that a Mrs. Krek, a neighbor, had heard Mme. Foldvari’s mother cry just before her death. “The devil fly away with these cookies my daughter made me. They made me ill.” Mme. Foldvari’s reply was.

“She lies, she lies out of the depths of her dirty soul. She hates me because once, when she wanted to buy a house from me I would not give her back her deposit money.” 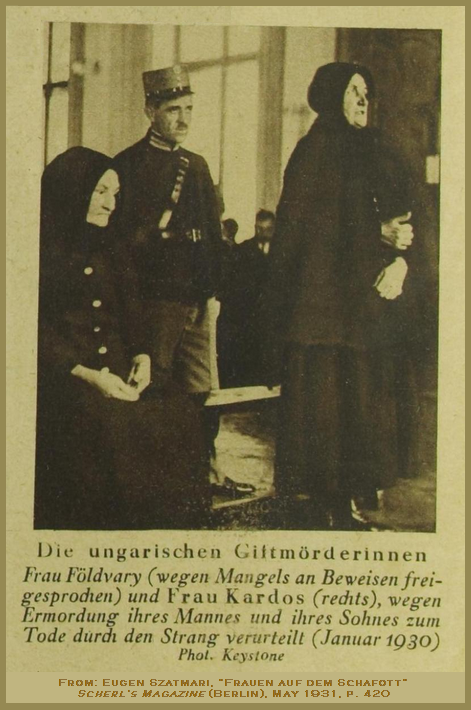 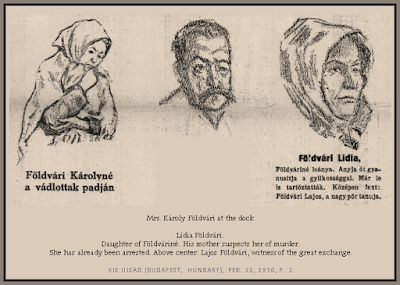 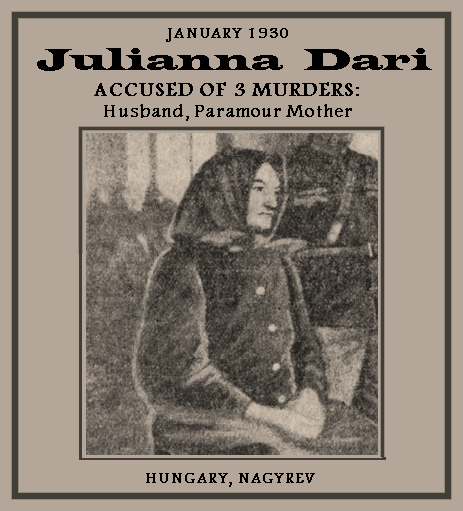 FULL TEXT: Vienna, Friday – Two more women out of 34 prisoners who were arrested on the charge of poisoning their relatives at Magyret (Nagyrev) in Hungary were tried to-day at the Skolznok Law Courts. Maria Kardos, aged 53 years, was charged with murder of her husband and her son, and Julia Dari, aged 49 years, was indicted for the murder of her husband, her lover, and her mother; all the murders, it was alleged, were committed through poisoning with arsenic.

These two prisoners differ from the others hitherto tried in that they are the richest among them and also because there are traces of past beauty in their faces, while the other defendants were mostly of a boorish if not almost ugly type. The two women were also better dressed than their companions.

Frau Dari pleaded not guilty. Her husband, she said in her evidence, was a drunkard and suffered from blood-poisoning. She took him to hospital in Budapest, but a week later her returned to Magyret (Nagyrev). As to the lover’s death, she attributed it to digestive troubles; he ought to have undergone an operation which he refused to have. Dari is also accused of having poisoned her mother by giving her a cake containing arsenic. She said in her evidence that she loved her mother and that her neighbor only accused her of this crime because she hated her. later on, when examined by the judge, the prisoner admitted that the husband received a glass of wine from Frau Kardos when he was visiting her at her place, and that this wine apparently contained arsenic as he was taken ill afterwards and died.

~ Midwife Who Coveted a House. ~

Frau Kardos pleaded not guilty, but under examination of the Judge admitted that the midwife in the village, Frau Ollah, who had since escaped earthly justice by committing suicide, induced her to poison her son Alexander Kovacz, who was 23 years of age and very ill. “Why let him suffer?” said Frau Ollah; “poison him.” Frau Ollah desired the house of the young man, said Frau Kardos in her evidence, and for this reason suggested the poisoning. When Frau Kardos left the room of her son for a minute the midwife poured poison over the food, but she pleaded that she had not had any knowledge of Frau Olla’s final plan.

Under the examination of the Judge, Frau Kardos admitted that Ollah poisoned the prisoner’s husband, which she said was a much easier thing, because Frau Ollah hated the late Herr Kardos. “If the midwife did this all on her own, why did you pay her money for it?” asked the judge. The prisoner could not answer this question.

The trial is still going on. 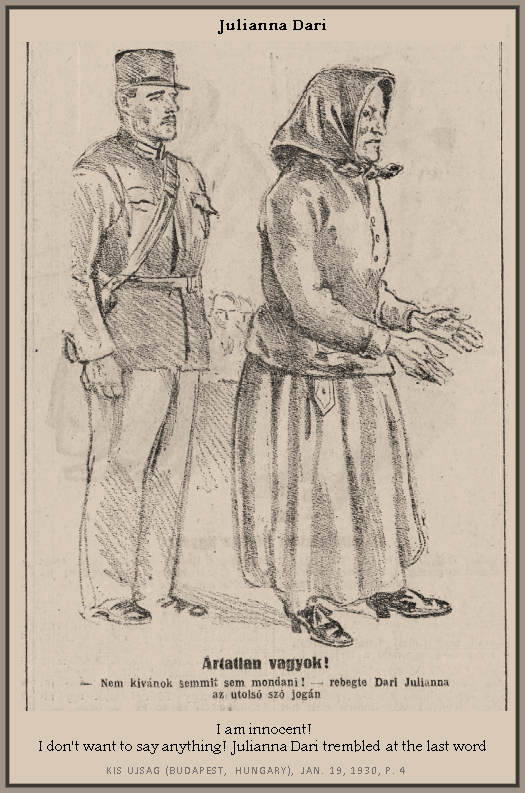 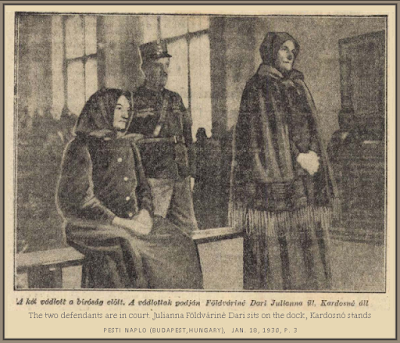 SEE: “How Wives Gained Power By Mass-Murder of Husbands - Hungary 1929”