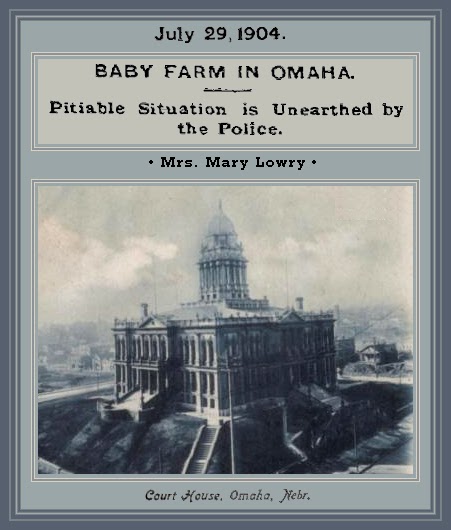 FULL TEXT: The Omaha, Neb., police Monday night unearthed a disgraceful and pitiable situation at a "baby farm" at Thirty-sixth and Larimore Streets. The found three babies in nearly the throes of death and were told that two others had died within the past week. Mrs. Mary Lowry, who said that she had been running a “boarding house for babies” since last January, was arrested and taken to the city jail.

The case was brought to the attention of the police by Father Judge, whose attention had been called to the place by one of the grief-stricken mothers, who had asked him to baptize her child. When the police asked Mrs. Lowry for an explanation she said that the doctor told her the babies were dying of starvation.

One of the mothers, who was at the place nursing her child, said that the conditions were all the result of Mrs. Lowry’s poor care for the babies. She said that her child weighed eleven pounds when she brought it to the place, and that it now weighs but two pounds. The police will make a further investigation.