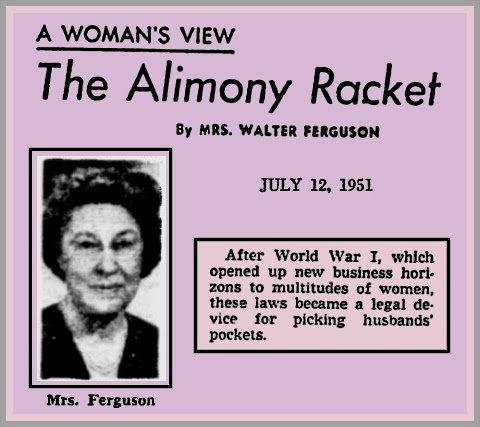 FULL TEXT: A Cleveland judge says a wife is not entitled to alimony unless she has “enriched the marriage with work, love, devotion and worldly goods.” His decision was made in a case in which a woman had asked for divorce and alimony after one month of marriage. Our common sense applauds the justice of the verdict.

It is interesting, and disheartening, to trace the deterioration of American marriage by alimony records. Nothing shows more clearly the changing feminine attitudes, and the amazing progress of women in the economic world.

Today we need a whole new set of laws about marriage. Most alimony rulings are antiquated. They should be revised all down the line.

They were planned first to protect women, who after divorce stayed at home and brought up their children as old-fashioned mothers did. These laws grew out of an old concept that women were helpless weaklings and unable to fend for themselves.

After World War I, which opened up new business horizons to multitudes of women, these laws became a legal device for picking husbands’ pockets.

Something must be worked out from the present hodge-podge of laws to protect children, and at the same time prevent the hard-boiled sisterhood from using marriage as a high-jacking scheme.

Marriage is nothing if it isn’t a partnership. The wife of long ago contributed more than her share toward family support. Nobody objected to her working so long as she wasn’t paid for it. Now that the modern wife is paid well, it’s time to stop alimony hold-ups.

Men and women must be equally responsible for the support of their children – as they have always been. Any effort on the part of either to shun that duty should be punished severely. But certainly, society can no longer tolerate the parasitic woman.