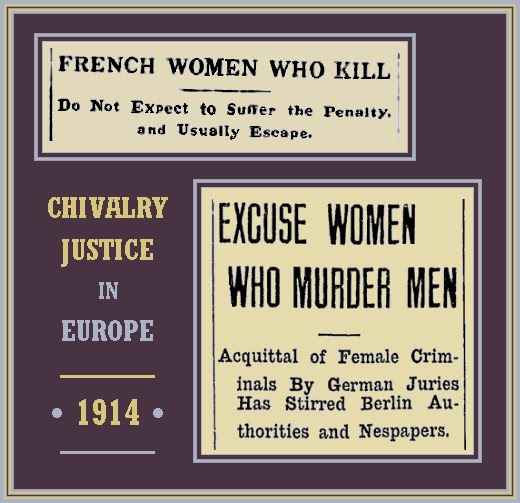 FULL TEXT (Article 1 of 2): Berlin, May 20. – Berlin appears to have imported for itself what the French have called “crimes of passion,” and to have extended their range far beyond the French example. A series of recent murders of men by women have been so lightly punished that the entire Berlin press is criticizing criminal and authorities severely.

A conspicuous case of some months ago aroused the press to protest. A young woman, informed by her lover that he did not care for her any more, invited him to a farewell walk in the Tiergarten and shot him in the back of the head, killing him instantly. She was brought to trial, not on a charge of murder, but of manslaughter, and the public prosecutor admitted the existence of the mitigating circumstances under a paragraph of the penal code are present “when the defendant at the time of the commission of the action was in such a condition that he did not realize what he was doing, or suffering under a pathologic disturbance of the senses through which his power of decision was made impossible.”

This condition, the state admitted, was present, due to the young woman’s anger at being deserted. The sentence was for a year and a half to the penitentiary.

The most striking of the whole series of “crimes of passion” was the most recent. The woman in the case lived in an aristocratic quarter of Greater Berlin in apartments paid for by an admirer. The man began to show a coolness toward her and finally informed her that he intended to sever relations with her. She demanded the payment of a considerable sum, which was refused. Thereupon she invited him to a restaurant for a farewell supper. In a corner of the room, behind a screen, she drew a revolver from her muff and shot him four times. He was in a hospital for weeks, and still carries one bullet in his body.

In this case, too, the woman was charged with attempted manslaughter, which involves a much lighter penalty than attempted murder. It was proved on her trial that she had told her servant girl that she intended to shoot the man, and that no woman is punished any more in Berlin for killing a recreant lover. She had also written in a similar vein to relatives and friends, and after the shooting she boasted to her servant that she had sent four bullets into her victim.

The jury acquitted her, and the spectators in the court room applauded so long and so loudly that the judge ordered the room cleared and threatened fines or contempt of court.

The Kreusseltung, fairly represented the views of the entire press, comments:

“It is utterly past understanding how such a person could win such sympathy that the acquittal should be greeted with frenetic applause. … It is perfectly plain that such verdicts, which we have seen repeatedly in the recent past, signify a danger to the security of the empire.”

In administering the oath to a jury which began work, a Berlin judge referred to the recent crimes by women and warned the jurors against permitting sympathy in such cases to warp their judgment.

[“Excuse Women Who Murder Men – Acquittal of Female Criminals By German Juries Has Stirred Berlin Authorities and Newspapers,” syndicated (AP), The Spartanburg Herald (S.C.), Jun. 2, 1914, p. 2; The ellipsis “…” in the next to last paragraph appears as in the source text.]

***
FULL TEXT (Article 2 of 2): They have got out of the habit of executing women in France. For the past 10 years they have been about xxx murders a year in France, two-thirds of them being crimes of passion, as the French call them. Rarely, indeed, is a murderess executed. There is a very notorious case that may be recalled, that of Mme. Lamberjack, the wife of a well-known automobile manufacturer. She had been divorced from a former husband for 12 months, and the former mates, accompanied by their attorneys, were to meet for the purpose of arranging for an equitable division of the furniture. In the presence of the witnesses Mme. Lamberjack drew a revolver and shot her ex-husband. She even pursued the wounded man into the garden and there emptied the contents of her revolver into his body. Her defense was that she loved him too much to see him married to another. She was acquitted.

Another case was that of Mme. Poeckies, who kept a small school in the suburbs of Paris. One night as she and her husband were returning home together a, couple of gunmen opened fire and killed the man. At the trial it was proved that Mme. Poeckies had hired them to commit the murder. She said that her husband was a man of dissolute character and had been unfaithful to her. She was acquitted.  France does not punish her murderesses because the average Frenchman is very impressionable, and pays more attention to the emotional appeals of the defending counsel than would the average Canadian juror.  On account of this forensic eloquence reaches a high pitch in France, and scores of murderers are saved every year for no better reason than that they have eloquent advocates.

In France the judge is not the stem master of the court-room that he is in English countries. At the trial of Mme. Steinheil, who was accused of having murdered her husband and her mother, a contingent of youthful barristers behaved outrageously,. making it impossible for the jury to hear the voice of the public prosecutor, and jeering whenever he made a point against the prisoner. A French trial, according to a recent observer, resolves itself into a triangular duel among the judge, the prosecutor and the lawyer for the defense. Sometimes all three speak at once. The judge frequently interrogates witnesses. The public in the background applauds, hisses, laughs and otherwise takes a hand in the proceedings. Emotion decides the issue. If the murderess looks repentant, and weeps becomingly, she will frequently be acquitted without the jury leaving the box. In view of the great political influence which Mme. Caillaux can command, it does not appear likely that she will pay any severe penalty for her crime.