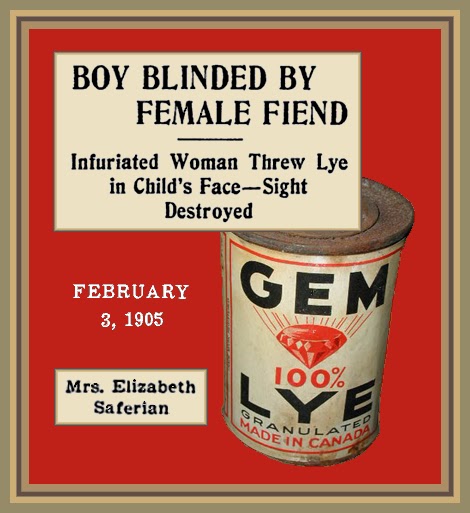 Here is an interesting case of two violent women, one who attempts to kill another, with the targeted woman deciding to get quick revenge not on her female attacker, but on an innocent small boy instead.

FULL TEXT: Fresno, Cal., February 3. – A four-year-old boy, Eddie Harpotlian, is hopelessly blinded in both eyes by concentrated lye thrown in his face by Mrs. Elizabeth Saferian, it is alleged. The inhuman deed was the result of trouble between the two families over a land deal.

Mrs. Saferian called at the home of Mrs. Harpotlian and discussed their troubles. Both showed some temper, finally, just as she was leaving, Mrs. Saferian asked for a cup of water. Mrs. Harpotlian, it is alleged, gave instead a cup containing a strong solution of lye. Mrs. Saferian barely tasted the stuff, and when she felt it burn her lips, realized an attempt had been made to poison her.

In her fury she turned and threw the contents of the cup into the face of the child, which was playing on the floor. The child screamed in agony. Before any thing could be done to relieve it. The sight of both eyes was destroyed and his face horribly burned. Both women were arrested on a charge of attempted murder.