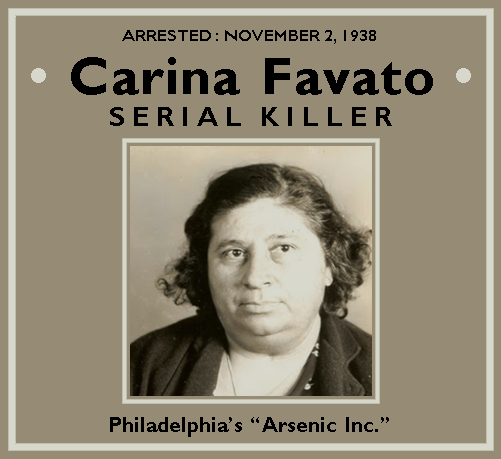 Carina Favato was a ringleader in Philadelphia’s “Arsenic Incorporated” murder syndicate. She pled guilty to poisoning three men, Charles Ingrao, Philip Ingrao, and Guiseppi DiMartino, at her trial on April 21, 1939. She may have murdered Antonio Romualdo as well. She was sentenced to life imprisonment.

***
FULL TEXT (Article 1 of 6): Mrs. Carina Favato, 45, of Bouvier st., near Wingoshocking, was held without bail yesterday as the third person the police accuse in an alleged “poison murder syndicate.”

Mrs. Favato was charged with with having knowledge of the death of Philip Ingrao, son of her common-law husband, by poisoining, in what police said was a killing for insurance.

The others previously held are Herman Petrillo, of Langhorne, and Mrs. Stella Alfonsi, 29, of Ann st., near Belgrade, who were charged with the poison murder of Mrs. Alfonsi’s husband, Ferdinand.

Meanwhile, police prepared to seek the disinterment today of the body of Charles Ingrao, Philip’s father, and said to have been Mrs. Favato’s common-law husband, to determine whether his death in August, 1935, was caused by poisoning.

Mrs. Favato was arraigned before Magistrate Beifel in City Hall, where she denied the charges in full. When police told the Magistrate, however, that she had $6700 in life insurance on Philip when he died, Beifel held her without bail.

She is charged by police with having collected some $8000 in insurance on the life of Charles Ingrao. At present, detectives said, she carries $2000 on the life of Michael Ingrao, brother of Philip, and an examination of him will be made to determine whether any arsenic has been given him.

Mrs. Favato was arrested after an autopsy of the body of Philip Ingrao, who died last June 25, disclosed arsenic in his liver and stomach.

Detectives’ attention was directed to his case when it became known that Ingrao had been friendly with Petrillo, already held in Alfonsi’s death.

Lieutenant James Kelly, of the homicide squad, testified at the hearing that Petrillo had also been friendly with Mrs. Favato, boarding at her home at the time Philip died.

Kelly said the woman made fraudulent statements in obtaining insurance on the boys, and made false and misleading statements to detectives.

City Councilman Edward A. Kelly, representing Mrs. Favato, said there was no evidence that she had administered the poison.

“We don’t charge her with administering poison,” Lieutenant Kelly replied. “We do charge that poison was administered with her full knowledge and consent.”

Petrillo and Mrs. Alfonsi were held without bail last Thursday [Nov. 3, 1938]. Petrillo was accused of wooing Mrs. Alfonsi and enlisting her aid in causing the death of her husband to collect $2000 in insurance. 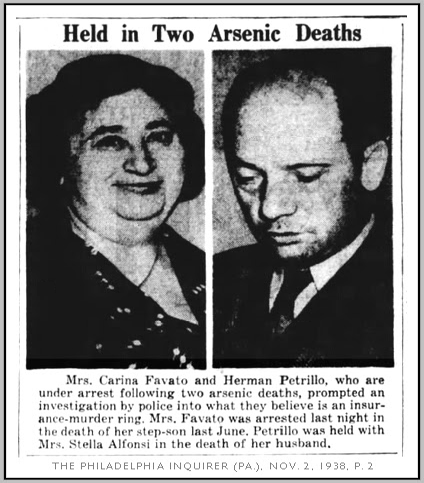 Mrs. Favato was faced with testimony by an insurance salesman that she had invited him to join in a wide-spread poisoning scheme to collect insurance, and by Mrs. Susie di Martino, a co-defendant who turned State’s witness, that Mrs. Favato collected $1,979 insurance after poisoning Guiseppe di Martino, her husband.

Mrs. Favato’s decision to plead guilty took the case from the jury and left her punishment to the decision of three judges.

Herman Petrillo, first to go on trial, was convicted by a jury of first degree murder for which a death sentence is mandatory.

At the conclusion of the summation of the testimony for the court, Trial Judge Edwin G. Lewis announced:

“I am sure the other judges will agree with me that we will take into consideration Mrs. Favato’s attitude and what co-operation she gives the district attorney’s office whether the punishment will be the electric chair or life imprisonment.”

Mrs. Favato also pleaded guilty to defrauding insurance companies of about $28,000 on the lives of the three, and to a charge of conspiring with others to murder.

Police have ordered more than a dozen bodies exhumed in their investigation. Mrs. Di Martino and Paul Petrillo, uncle of Herman Petrillo, are awaiting trial.

FULL TEXT (Article 3 of 6): Philadelphia – Additional precautions were taken last night to guard a confessed woman principal in a widespread insurance-poison ring who twice attempted suicide while shouting “witches” were chasing her.

High police officials said no official report had been made, but guards declared on one occasion they found Mrs. Carina Favato with a handkerchief knotted around her neck. Several hours later, they said, she plunged a safety pin into her arteries.

The two suicide attempts occurred during a hysteria, the guards said, in which the 200-pound confessed poisoner screamed repeatedly from her cell:

To a guard’s question she replied:

“I mean the witches.”

The widow’s confession during her trial two weeks ago that she killed her step-son, her common-law husband, and another man led to the arrest of several others.

Eleven in all have been taken into custody on charges of homicide in connection with the murder of possibly 100 persons in several eastern states by a gang that collected an untold amount of insurance. Two others were sought.

Herman Petrillo, convicted and facing a sentence to the electric chair, has been quoted by District Attorney Charles F. Kelly as saying he sold “witch’s brew” – a solution of poison which sold at $300 a pint – to other members of the ring.

The district attorney said the 40-year-old Petrillo and Rafaele Poselli, 55, taken into custody Friday [Apr. 28], admitted they had a part in the vpoisoning of 11 persons.

Poison has been found in five bvodies, four of which were exhumed months after burial. Other graves will be opened this week.

One of the two fugitives is known as “Louie the Rabbi.” Investigators believe he was a ringleader. The second is a “professional widow” who, detectives say, poisoned several husbands.

FULL TEXT (Article 4 of 6): Philadelphia, Sept. 13 – A steak and chicken “breakfast of death” for four, including coffee containing a “witch doctor’s” potion, was described by a 200-pound woman today at the trial of Cesare “Jumbo” Valenti, alleged “strongarm man” for Philadelphia’s insurance-murder ring.

Speaking through an interpreter, Mrs. Carina Favato, who has pleaded guilty to three poisonings, said the “guest of honor” was her common-law husband, Charles.

Valenti, Mrs. Favato testified, brought the “portion” and poured it into her husband’s coffee.

Asked what else was served at the breakfast, Mrs. Favato said:

The dry-eyed witness said Valenti promised her if she would also drink some of the coffee “no one or any witch doctor could harm me.”

“He told me,” she said, “not to worry, that it would make my husband good or die.”

Mrs. Favato named the fourth breakfast guest as Randall Polsell self-styled “errand boy” for the murder ring, who pleaded guilt to one poisoning.

Favato’s death was one of the first ascribed to the murder ring, now blamed by investigators for 50 to 100 deaths. Mrs. Favato pleaded guilty the past April to poisoning her husband, his son by another marriage and a third man.

As Valenti’s trial went to the third day, another defendant was placed on trial in another courtroom. He is Paul Petrillo, 45-year-old South Philadelphia tailor who, detectives say, dabbled in the “black arts” and courted women whose husbands later were poisoned.

Charged with six poison deaths, he was on trial charged specifically with killing Luigi La Vecchio in 1932.

FULL TEXT (Article 5 of 6): Philadelphia, Oct. 3. – Herman Padillo, erstwhile Langhoene spaghetti salesaman, today was doomed to death in the electric chair, and Mrs. Carina Favato, self-confessed slayer of three arsenic victims, must spend her life in prison for their roles in the notorious Philadelphia murder-for-insurance conspiracy.

Petrillo was found guilty at separate trials for the murders of Ferdinand Alfonsi, slain by arsenic after his life had been heavily insured, and the drowning of Rafaele Garuso, a cripple, who was shoved into the Schutlkill River.

Mrs. Favato pleased guilty to slaying her husband, Charles Ingrao; her stepson, Philip, and a neighbor, Guiseppe De Martino. The court granted her leniency because her cooperation with authorities aided in trapping other members of the ring, which killed upwards of 100 persons for profit.

FULL TEXT (Article 6 of 6): Early on in the proceedings, Mrs. Carina Favato, a 45-year-old housewife, stopped her trial by dramatically pleading guilty on the witness stand to killing her husband, her stepson and a husband’s friend by feeding them arsenic at breakfast.

“I might as well get this over with. Let them send me to the chair. What have I got to live for? She told the stunned courtroom.

She was later sentenced to life imprisonment.

Carina Favato, convicted murderess: “Yes it is, but it gives death. All those who took it died.” 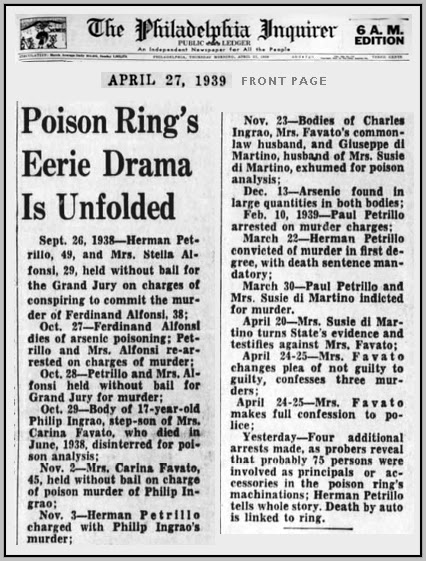 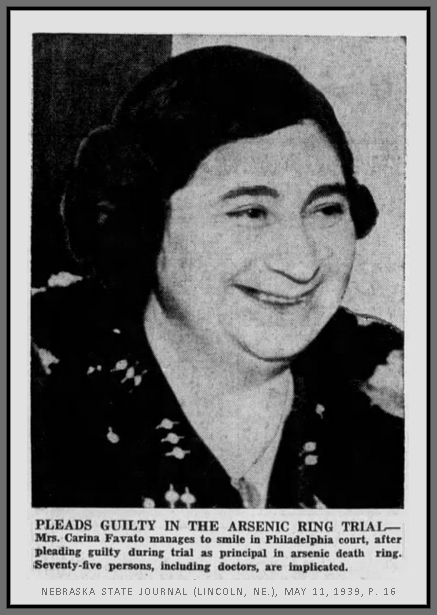 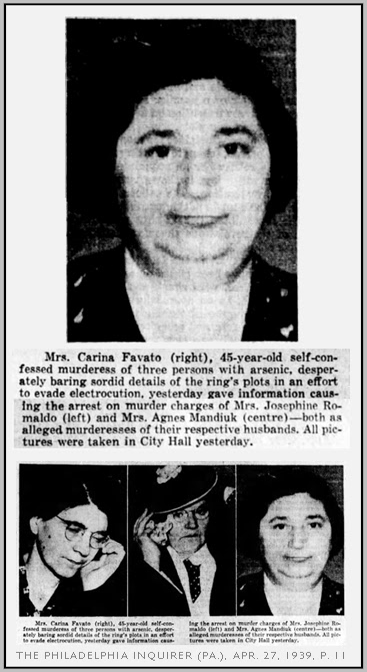 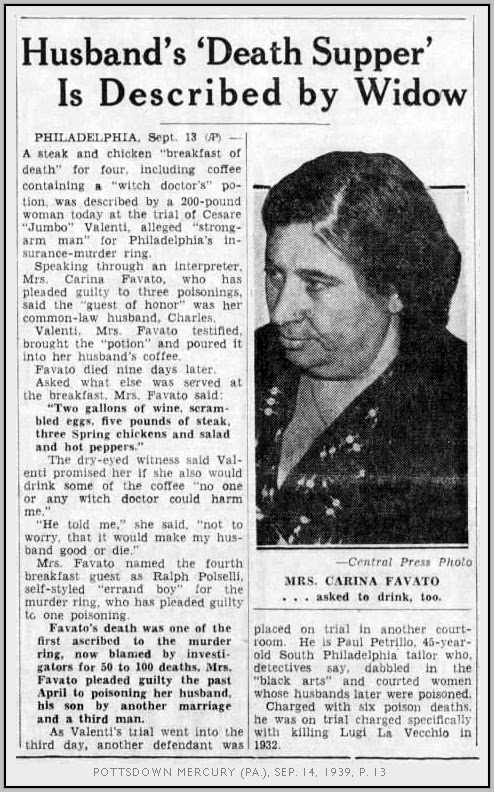 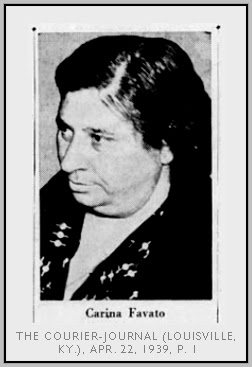 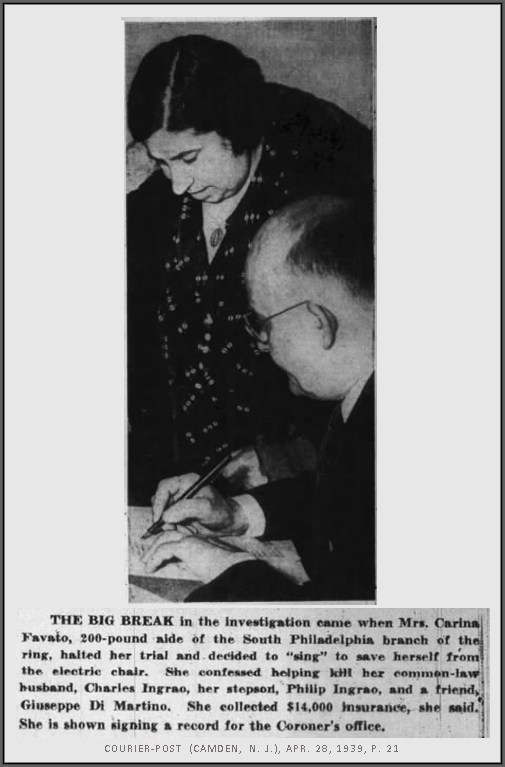 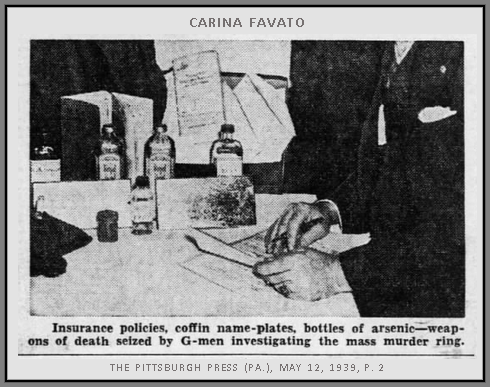 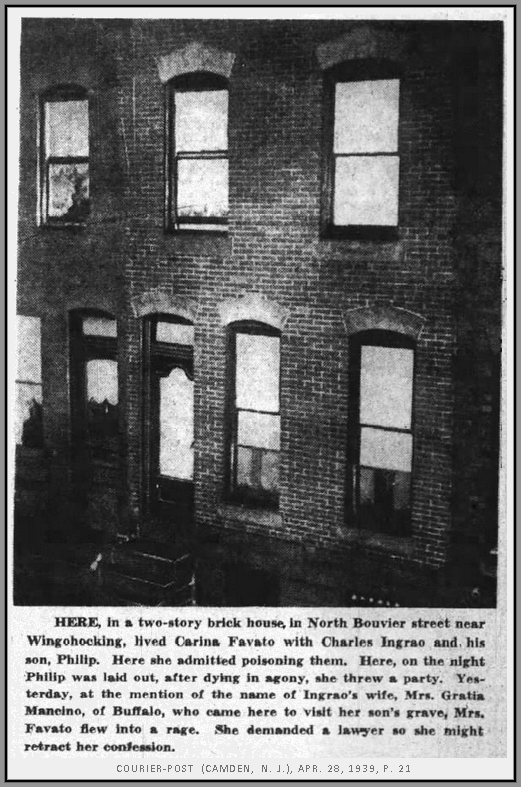