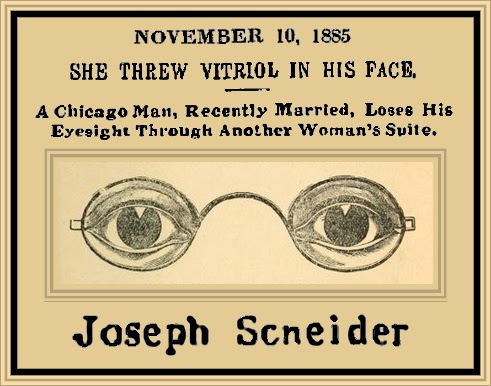 FULL TEXT: Chicago, Ill., Nov. 9 – Joseph Schneider lies in a critical condition at his home, No. 613 Forty-third street. His eyes, mouth and breast, are horribly burned with vitriol and the attending physician says there is some doubt about his recovery, and that, in any event, he will lose his sight. Some time ago Schneider borrowed, it is said, $1,000 from a Mrs. Stadelman. He failed to pay it, and she sued him and obtained judgment for $200. This was not paid until about two weeks ago, when Schneider got married. Before the marriage he is said to have compromised the matter with Mrs. Stadelman by paying her $50.

Last night he accidentally met Mrs. Stadelman at the corner of State and Thirty-second streets. They had some words when the woman dashed the entire contents of a large bottle of vitriol into his tare. He was removed to a neighboring drug store, where it was found that the liquid had filled his eyes and mouth, causing his tongue to swell so that he could scarcely speak, and had then trickled all over the upper portion of his body. His coat, vest and shirt were almost consumed by the acid. The woman escaped and will probably not tie arrested as Schneider requested that she should not be arrested.