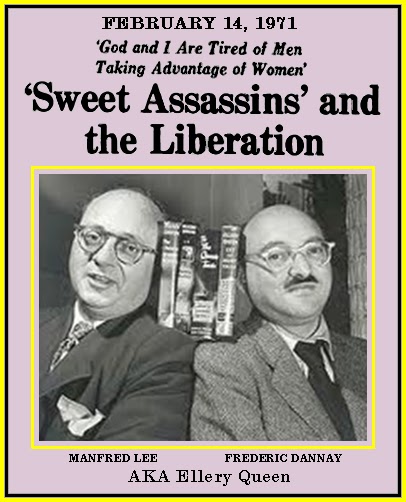 ‘God and I Are Tired of Men Taking Advantage of Women’

February 14, 1971: Today’s contribution to Picture Magazine’s series by famous American writers is by Ellery Queen, master of mystery, who is, as all mystery fans know, two persons — Frederic Dannay and Manfred B. Lee, cousins. In this article they discuss some of the more extreme adherents of Women’s Liberation.

FULL TEXT: On MAY 2, 1956, a 300-pound New Orleans car salesman named Max Jernigan had the bad luck to run into—or more accurately to be run into by — an early rebel against the dominant male, Beatrice P. Adams, an attractive 33-year-old stenographer. A fellow car salesman was the astonished witness to Miss Adams’s vigorous act of rebellion, and he told fascinated reporters about it.

“God knows how many times she ran over Jernigan. She would hit him, back down the drive into the street, and get another running start. Then she would take off up the drive, swerve over to the body, and hit it again. I mean run over it. There were tire marks all over the drive, the street, the sidewalk and the ground. I’m telling you, that was the most cold-blooded exhibition I’ve ever seen.”

• “Just pray to God,
She will provide”

Note the partnership. It required only one further step to reach what some leaders of Women’s Lib are proclaiming today, that God is female. “Just pray to God, She will provide,” the ladies are saying. It is to be hoped that they do not mean. She will indiscriminately provide male targets for their automobiles, as She allegedly did for Miss Adams.

It may seem extreme to extend the Women’s Liberation Movement into the area of homicide, but the record is crowded with relevant examples. A recent one leaps to mind, that of Andy Warhol, artist of the silver hair, blue contact lenses, leather jackets, Campbell Soup can paintings and nudie films.

• She produced a gun
And began putting the trigger

The scene was Warhol’s The Factory, site of his sixth-floor underground-movies studio. The liberated lady in question was one Valerie Solanas. Miss Solanas had starred in a Warhol flick, “I, a Man.” (Could the title have belatedly stirred her indignation?) Present with Miss Solanas and the film-maker were Fred Hughes, his friend, and Mario Amaya, London art critic and gallery director. Warhol was speaking to someone on the telephone. Miss Solanas produced a gun and began pulling the trigger in the artist’s direction. Amaya told reporters later, “She was going full blast. Andy, shouted, ‘Oh, no!’ and he went down. Then she turned on me.”

Amaya ran for it. He managed to get to an adjoining room and barricade the door, but not before suffering a wound in the gluteus. The lady then turned on Fred Hughes.

“She came over to me and said, ‘I’m going to shoot you.’” Mr. Hughes did what any sensible man would have done under the circumstances.

“I got down on my knees and said, Please, please, don’t shoot me.’“ It is tempting to believe that the gentleman’s ritual attitude of submission mollified Miss Solanas. In any event, she departed without carrying out her threat Warhol underwent surgery for wounds in the spleen, liver, stomach, esophagus, and both lungs, and survived. Meanwhile, Valerie Solanas had surrendered to a traffic officer in Times Square. Handing over the .32 automatic she had fired, together with a .22 revolver, she uttered the words, “I am a flower child. He had too much control over my life.” She did not explain, apparently, what she had against Mr. Amaya and Mr. Hughes, beyond the fact that they were men.

• She had organized a society
For cutting up men

Valerie told reporters that she had written Ma manifesto that explains a lot of things.” The document disclosed that, in addition to being an actress (and a would-be playwright), she was organizer of a group which called itself the Society for Cutting Up Men, or SCUM. SCUM’s program was to “eliminate through sabotage all aspects of society not relevant to women (everything), bring about a complete female takeover, eliminate the male sex and begin to create a swinging, groovy, out-of-sight female world.”

Precisely how many lady liberators go so far as to advocate the total annihilation of males is not statistically available, but that the SCUM group is not unique in this goal is admitted to by the underground press.

That Valerie Solanas had support in her attempt to eliminate Andy Warhol is testified to by leaflets handed out in the streets by a feminist group after the shoot-up in the Warhol atelier:

“ANDY WARHOL SHOT BY VALERIE SOLANAS. PLASTIC MAN VS. THE SWEET ASSASSIN . . . NON-MAN SHOT BY THE REALITY OF HIS DREAM . . . A TOUGH CHICK WITH A BOP CAP AND A .88 ... VALERIE IS OURS!” the leaflets proclaimed with more enthusiasm than accuracy about gun calibers.

Just how extensive are the symptoms of this homicidal hate the- men syndrome? How real a threat is faced by the largest of the world’s minorities, the male of the species? We are told by one feminist slogan, “Hell hath no fury!”; in another, The hand that rocks the cradle can also cradle a rock!” Many leaders of NOW, WITCH, and other acronymic groups call themselves gut feminists and speak of the “victim’s rage” they an experiencing. It may be the significant phrase in any understanding of the potential for violence in the movement. Rage, the rage of victimization released, seems to run through the speeches and writings of liberation leaden.

It shows up even among female journalists. Helen Dudar, who was exposed to the rhetoric of the Movement while on assignment for Newsweek, confessed to blistering a fellow-newsman with “a string of fearful obscenities” over a remark she took to be unflattering to her sex. From the time she began to associate with the militant feminists she found herself asking, “How do you control the hostility?” Her surfacing hatred toward male dominance was interfering with her work.

She was not alone. A nursery school teacher (!) told Miss Dudar, “I’ve been absolutely overwhelmed by feelings of hostility that scare the hell out of me.” This woman went on to explain that some of the “victim’s rage” she felt was being drained off by her Women’s Lib work and steering dear of men.

She tells of her violent rages against her husband. “I used to lie in bed beside my husband after those fights and wish I had the courage to bash in his head with a frying pan . . . I would mutter to myself through clenched teeth, pushing back the realization that I didn’t dare, not because I was afraid of seriously hurting him— I would have loved to do that—but because... I was afraid that he would leave me.”

But other ladies do not stop short of their fantasies. “I just grabbed the knife off the floor and shoved it into his chest,” a blonde wife and mother of four told Los Angeles police. She related how her husband had mistreated her, but she shed sincere tears over killing him. “I want him back . . . I wish I hadn’t done it.

The love-hate ambivalenz, as Freud called it Victim’s rage, as a feminist might retort; gut reaction to a real situation. She might even quote Frantz Fanon: “An oppressed individual cannot feel liberated until he kills one of the oppressors.’ Peter Fabiano was shot to death at his front door one Halloween Eve by a masked caller. Arrested for the murder were Goldyne Pizer and Joan Rabel.

• In almost any woman
“An almost incredible fury”

“We decided to kill Fabiano because Joan told me Fabiano had been mistreating his wife,” Miss Fixer told police. “I didn’t know Fabiano until Joan pointed him out to me that night.” Women’s Lib activists have said. “In almost any woman you can unearth an incredible fury.”

This anti-male virulence shows up again and again in history. Julie d’Aubigny [AKA, Mademoiselle Maupin or La Maupin], a 17th century French girl, killed 18 men before she was 21. She was a female d’Artagnan. She deliberately provoked men into facing her lethal dueling sword on the field of honor for the pleasure of running them through the heart

The example of Mile. d’Aubigny may be called into question because, as a lesbian, she had a built-in bias. But then there is the case of Princess Margaret of Burgundy, whose murders of men, including her own father, are said to have totaled a thousand. The princess dispatched her ladies to lure young men to her castle, called the Tower of Nails, where she had them disposed of. Margaret did not wage this awesome campaign of extermination out of a need for violent protest against the male-dominated world of the Middle Ages. The men had been her lovers, and dead lovers don’t go about smearing a girl’s reputation. Or so the story goes.

Nearer our own time is the case of Bianca Segura, the fiery intellectual anarchist known in Dictator Primo de Rivera’s Spain as La Hacha, which means the torch and also the hatchet. La Hacha, in a fierce quest of the perfect human society, chose a genetically superior mate for a night of procreation and out of her own body produced the perfect woman, her daughter Ginebra, who came to be known as the Red Virgin of Madrid. The Red Virgin, whom her mother intended eventually to mate with a male counterpart in order to found a line of super-beings, leaped to the forefront of the revolutionary movement that toppled de Rivera from power and even threatened the Spanish throne. And then the girl fell in love with a middle-aged army officer of  “rotten”—that is noble—blood, lost all interest in politics, and gave herself to hint La Hacha took her perfidious daughter on a picnic in the country, plied her with wine until the girl fell asleep under a tree and, with the ax she had used to cut the picnic firewood, chopped her Red virgin daughter into little pieces and fed them to the fire.

There is no denying the almost convulsive response among many women to the rallying cries of today’s ultra-feminists. Will it all wind up in pogroms and Buchenwalds? Or perhaps the male minority will be saved from extinction by the world’s more numerous Auntie Toms, who find no cause for homicide except for an occasional individual case — in the existing order. By the way, for the record, some of my best friends are females.