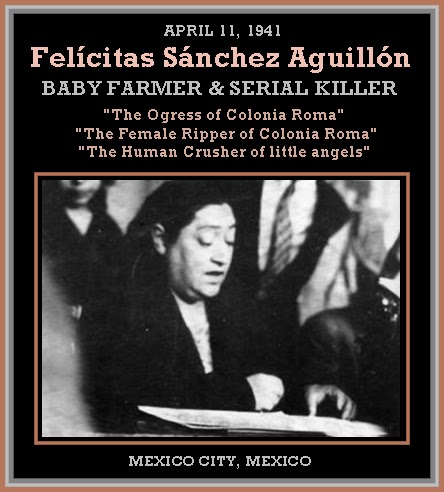 “From a young age she showed a perverse nature.” (Carlos Conde, former husband)

Felícitas Sánchez Aguillón or Sánchez Neyra (1890 - June 16, 1941) was a Mexican nurse, midwife, baby farmer and serial killer, active during the 1930s in Mexico City, who killed babies in her care. It is estimated that Felícitas murdered children in numbers ranging from between 40 and nearly a hundred. Her victims were aged from newborn to three years old. Typically she would poison or strangle the children, according to some reports sometimes she would dismember a child while still living. Felícitas was given various sobriquets by the Mexican press, such as "The Ogress of Colonia Roma", "The Female Ripper of Colonia Roma" and "The Human Crusher of little angels." 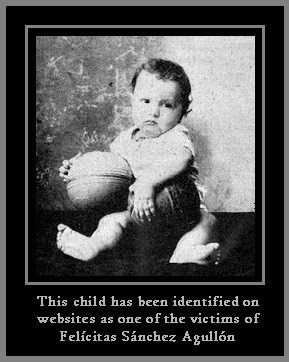 Felícitas was born in 1890 in Cerro Azul, Veracruz. Her mother never loved her and showed her affection. This caused her a psychopathic personality and aversion to all the maternal. Since childhood she showed a perverse behavior, habitually poisoning street dogs. During the 1900s, she graduated as a nurse and married Carlos Conde. She had twin daughters with him but didn't want to take care of them, and suggested to her husband that they give them up for adoption. He accepted this proposal, but after the daughters had been adopted, he changed his mind. However, Sánchez refused to tell him where their daughters were, which led to their divorce in 1910. 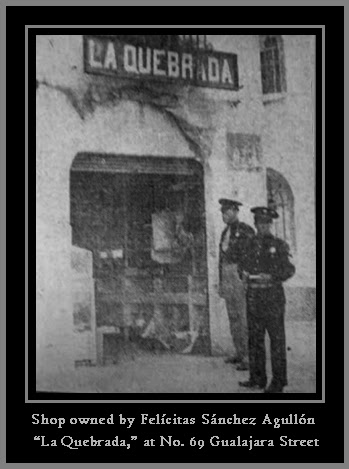 In that year Sánchez moved to Mexico City. In Mexico City, she lived in an apartment building located on Salamanca Street, Colonia Roma. She started to attend births and illegally practice abortions. She also began to trade in illegal adoptions. During the 1910s she was arrested twice for practicing illegal adoption and baby farming.

As with many other baby farmers across the world, Felícitas would take money from the mother of a newborn, promising to use the funds to care for the child until they could be given an adopted home. The truth was, she would sell those she could rid herself of as quickly as possible, and if the child was not sold within a few days she would murder it. According to one source she enjoyed beating her victims.

She dismembered the bodies and incinerated them. Dosing the flesh with gasoline before throwing them in the large furnace she had installed for that purpose, and in other cases she would flush the body parts down the toilet. 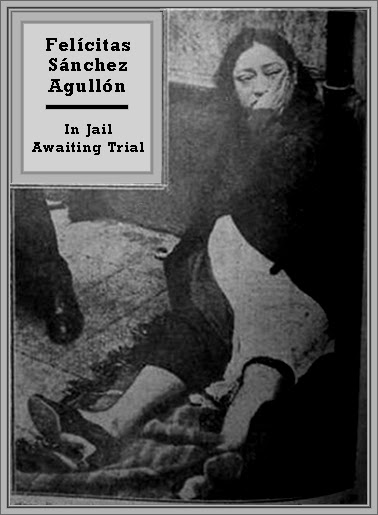 On April 8, 1941, human remains were discovered near her home. Three days later Felícitas Sánchez was arrested, along with two accomplices: her second husband Roberto or Alberto Covarrubías and a plumber, Salvador Martínez, who worked for Sánchez.

On July 16, 1941, before she could be tried for her crimnes, Felícitas Sánchez committed suicide. She and her second husband had a third daughter, who was placed in state care after her father was convicted for involvement in the murders.

[Based on Wikipedia and other sources] 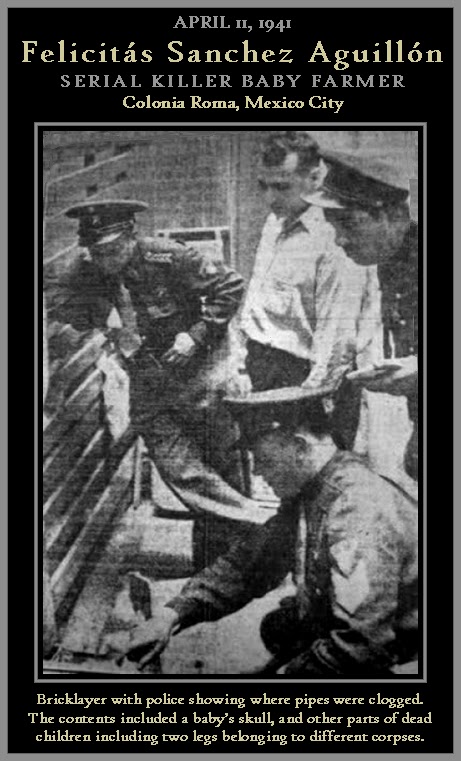