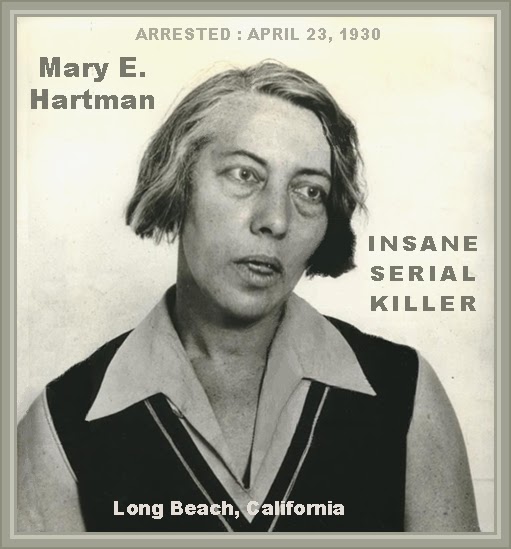 FULL TEXT (Article 1 of 3): Discovery of arsenic in the vital organs of Ruth Hartman, 14-year-old Long Beach girl who died on the 14th inst., supposedly the victim of ptomaine poisoning, led yesterday to the detention of her widowed mother by Long Beach police for questioning. The mother, Mrs. Mary Hartman, was taken in custody following interrogation at the grounds of Detective Sergeants La Baron and Wood.

Search of the Hartman home last night by Detectives Le Baron and Wood led to the finding in the medicine chest of two unlabeled packages which contain a white powder similar in appearance to arsenic. A similar package containing apparently the same sort of powder was found on Mrs. Hartman when she was searched at the police station. The powder in the three packages will be analyzed at once, it was said last night.

Questioning of Mrs. Hartman and her subsequent arrest as a suspect, came as the joint result of a request made by Coroner Nance that an inquiry be conducted into the previous deaths, under more or less mysterious circumstances, of the woman’s husband and son. Coroner Nance asked for the inquiry when he learned from Surgeon Wagner that chemical analysis of the dead girl’s organs had revealed traces of arsenical poisoning.

Accordingly, under direction of the District Attorney’s office, the bodies of O. B. Hartman. 47, the husband, and Henry A. Hartman, 22, his son, will be exhumed today from their graves in Sunnyside Cemetery, Long Beach, where the former has lain more than two years and the latter nearly a year. The vital organs of  are to be turned over to the County Autopsy  Surgeon for chemical analysis aimed at determining whether they also contain any form of metallic poisoning.

Investigation of the girl’s death death and its consequent order for the double exhumation, according to Detective Sergeants Le Baron and Wood, are the result of insistent requests by other members of her family, in which intimate friends joined. Harking back to the deaths of her father and brother, they recalled that each had been marked by unusual circumstances, although neither had resulted in official investigation. 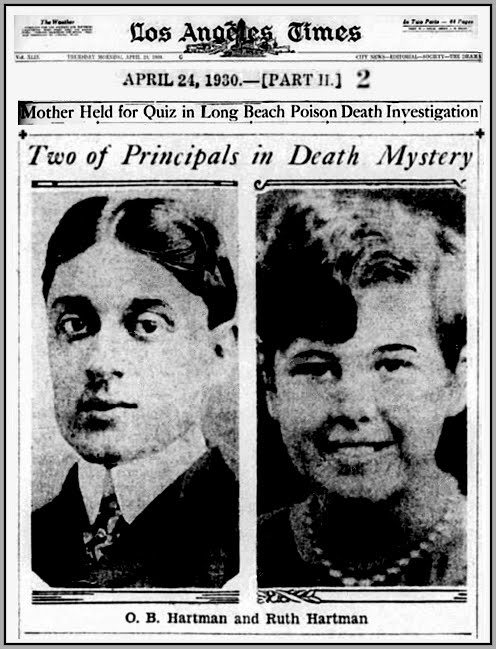 O. B. Hartman died in the family home at 1726 Lime avenue, Long Beach, October 10, 1927. A month before, it was recalled, he had been struck on the head while asleep, the murderous attack occurring a few days after the killing of a neighbor by a pants burglar. His death, coming suddenly and after the wound had healed, was attributed at the time to after-effects of the nocturnal assault.

Early in June, 1929, Henry A. Hartman announced that he was about to marry, and a few days later he was stricken suddenly with what was diagnosed as ptomaine poisoning. He was taken to a Long Beach hospital, where he died on June 9. An official post-mortem was performed by hospital pathologists to satisfy their curiosity, according to the Long Beach police, but it failed to disclose anything of a suspicious nature.

Ruth Hartman’s death on the 14th inst. also at first was attributed to ptomaine poisoning. Last month the girl and her mother were seized with an illness after partaking of hamburger in the Long Beach amusement zone. Mrs. Hartman recovered the following day, but the girl suffered about two weeks before being pronounced out of danger. Then, on the verge of complete recovery, she had a relapse  and died in the hospital.

A post-mortem at the Cleveland mortuary, according to the detectives, revealed indications of poisoning, and at the insistence of friends the vital organs were sent here yesterday for a chemical analysis. When County Autopsy Surgeon Wagner reported his finding of arsenic traces in the tissues, Coroner Nance asked the District Attorney’s office to order the exhumation.

The three dead persons all carried insurance policies, the father’s being for $1000, the son’s for $2700 and the daughter’s for $1000. According to Detectives Le Baron and Wood the policies were payable to Mrs. Hartman. The officers also state investigation to date shows that shortly before his death Henry wished to let his policy lapse but that his mother dissuaded him and paid the premium.

Besides Mrs. Hartman. there are two surviving members of the family, one married daughter, and an unmarried daughter, Nettie, 19, a stenographer employed in a physician’s office. The Hartmans have lived in Long Beach about twenty years, the father having been employed as a carpenter’s helper.

An additional touch of mystery was given the case yesterday when Nettie Hartman told the detectives that recently she has received from an anonymous sender thirty pound boxes of candy and numerous boxes of cut flowers. Each gift was accompanied by a white card, blank except for the presence of a question mark. 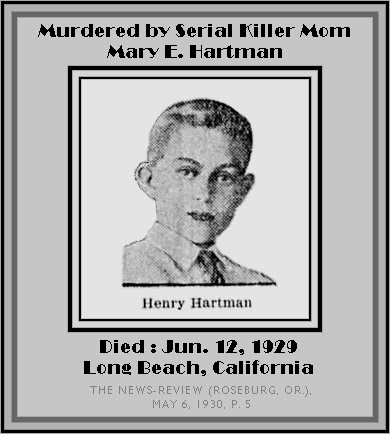 FULL TEXT (Article 2 of 3): Long Beach, Ca., April 25. – Bodies of the husband and son of Mrs. Mary Hartman, to-day were being examined for traces of poison in connection with an alleged insurance swindle, despite denial of the woman that she had anything to do with their deaths.

Mrs. Hartman, beneficiary of insurance policies held by the three members of her family, is being held pending to-day’s autopsy. Alienists who have observed the woman expressed the belief she was unbalanced mentally.

To all questions she made no reply except: “I love them; how could I have killed them?” 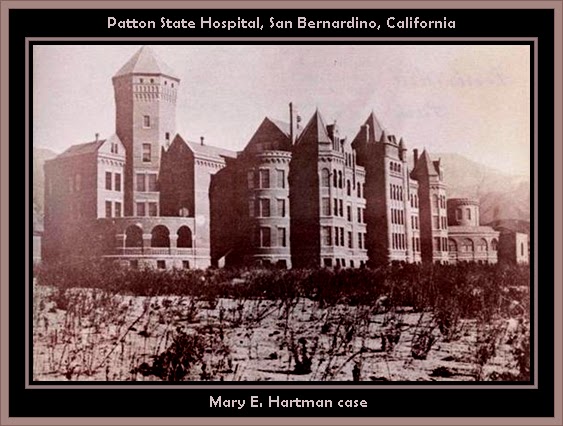 FULL TEXT (Article 3 of 3): Mrs. Mary Hartman of Long Beach, suspected of the arsenic murder of her husband, son and daughter, will not be tried on the charges, but will be confined to the Patton State Hospital as an insane person. Daniel Beecher, chief of the District Attorney’s trial department, announced yesterday.

Mrs. Hartman was found insane by Superior Judge Gould at a hearing of the insanity Commission: The decision was based on the testimony of Dr. Martin Carter and Dr. S. D. Ingraham, who examined the woman.

According to Dep. Dist.-Atty. Beecher, a chemical examination of the bodies of Olaf Hartman, the woman’s husband, who died October 15, 1927; Henry Hartman, a son, 22 years of age, who died June 12, 1929, and Ruth Hartman, a daughter, who died April 24, last, disclosed the presence of sufficient arsenic in each case to cause death. Chemists also found arsenic in Mrs. Hartman’s hair, Beecher said.

The woman was arrested last April shortly after her daughter’s death, and was held for questioning. Later it was decided to test her sanity. 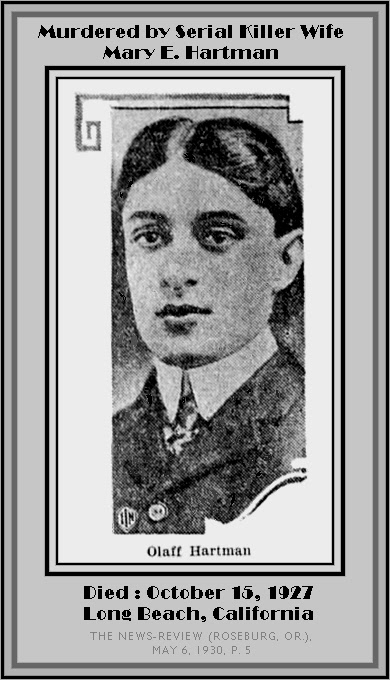 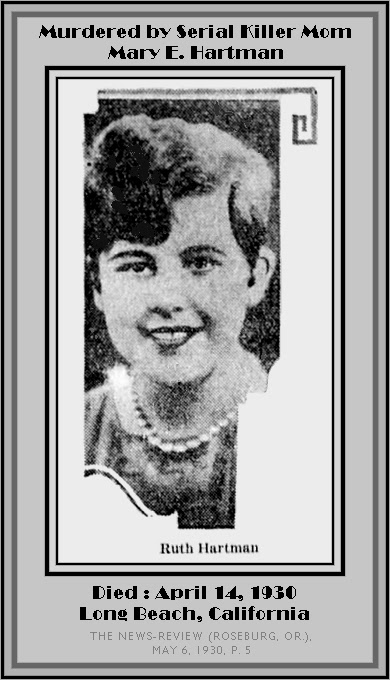 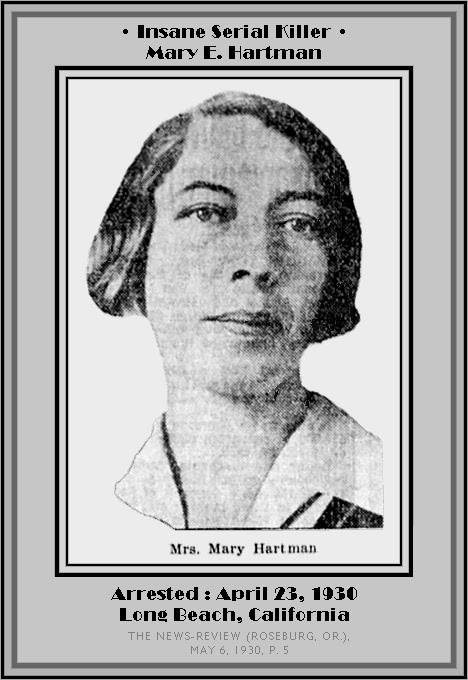 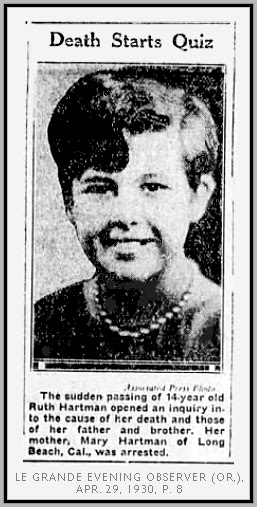 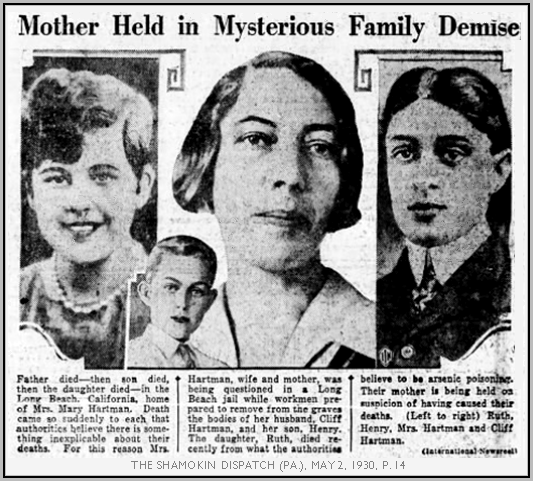 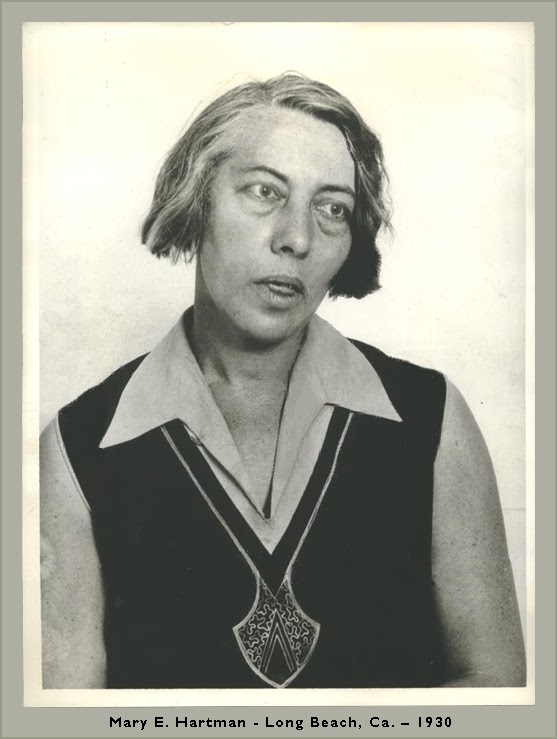 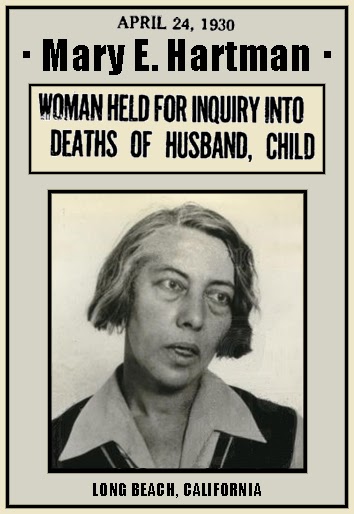