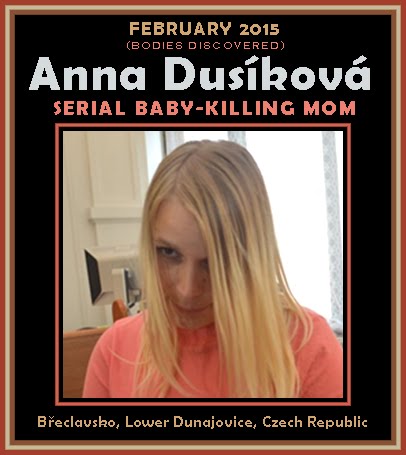 “I was afraid of losing my boyfriend.”

That’s the reason Anna Dusikova gave for killing three newborns between 2013 and 2015. Unlike American counterparts Czech journalists ignored politically correctness and noted the fact that  this case was similar to other cases of the type in that the mother attempted to unload the blame for baby-killings on the man.

Anna’s explanation was a fiction. Her partner, Daniel Masaryk, when informed of the claim, said he would never have left her had she birth.

The murderess has two children, a boy and a girl, whom she abandoned to be with Daniel Masaryk. They live with their father.

When pregnant, Anna disguised her growing belly by telling Masaryk that water bloating was a side effect of a health complication.As a result, Masaryk allegedly never noticed or suspected that she was pregnant. Her first two babies – first a girl, then a boy – were strangled with shoelaces and their corpses were hidden in the attic of the couple’s home.

Her third child came into the world on February 12, 2015. It was full-term, healthy, breathing, crying. Anna wrapped him in rags, threw im the bag of dog food and stuffed it  under the radiator. Then she fainted from blood loss, then she fainted for When he awoke, the child was dead. She put the corpse in the attick with the others and went to a nearby hospital where doctors recognised she had given birth and raised the alarm when she couldn’t explain where her baby was.

In court, Anna Dusíková “spoke calmly, as if she did not even know what she had done.”

She was found guilty and was sentenced to 24 years in prison.