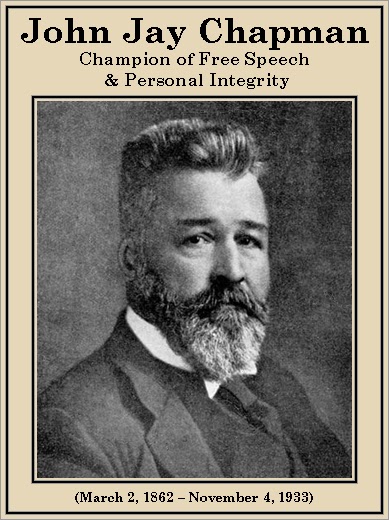 FULL TEXT: When I was asked to make this address I wondered what I had to say to you boys who are graduating. And I think I have one thing to say. If you wish to be useful, never take a course that will silence you.

Refuse to learn anything that implies collusion, whether it be a clerkship or a curacy, a legal fee or a post in a university. Retain the power of speech no matter what other power you may lose. If you can take this course, and in so far as you take it, you will bless this country.

In so far as you depart from this course, you become dampers, mutes, and hooded executioners. As a practical matter, a mere failure to speak out upon occasions where no statement is asked or expect from you, and when the utterance of an uncalled for suspicion is odious, will often hold you to a concurrence in palpable iniquity.

Try to raise a voice that will be heard from here to Albany and watch what comes forward to shut off the sound.

It is not a German sergeant, nor a Russian officer of the precinct.

It is a note from a friend of your father’s, offering you a place at his office. This is your warning from the secret police.

Why, if you any of young gentleman have a mind to make himself heard a mile off, you must make a bonfire of your reputations, and a close enemy of most men who would wish you well.

I have seen ten years of young men who rush out into the world with their messages, and when they find how deaf the world is, they think they must save their strength and wait.

They believe that after a while they will be able to get up on some little eminence from which they can make themselves heard.

“In a few years,” reasons one of them, “I shall have gained a standing, and then I shall use my powers for good.”

Next year comes and with it a strange discovery. The man has lost his horizon of thought, his ambition has evaporated; he has nothing to say.

I give you this one rule of conduct. Do what you will, but speak out always.

Be shunned, be hated, be ridiculed, be scared, be in doubt, but don’t be gagged.

The time of trial is always. Now is the appointed time. 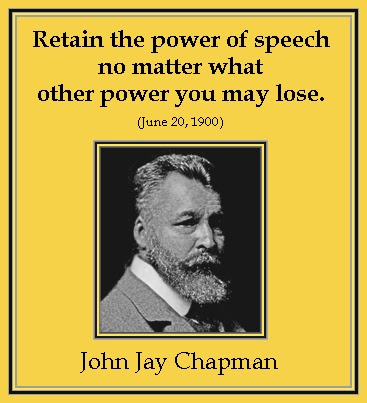 The above text dating from 1900 is one of the most eloquent of all defenses of free speech ever published.

The concept called “social justice” is an idea based on the philosophy of “class struggle”  that promotes group rights and regards individual rights as unimportant at best, and more properly as a concept that counter-revolutionary, or non-”progressive.” It requires a scapegoat – in the past: Kulaks (highly skilled farmers; Bolshevik Socialist Russia), people with “gifted” IQ (Communist Khmer Rouge Cambodia), Jews (National Socialist Germany).

In today’s globalist “social justice” movement it is the “white male heterosexual” who is the scapegoat.

The target is chosen in accordance Antonio Gramsci’s recommendation of identifying a class of people as a “hegemony” that must be attacked. Thus, inventors, innovators, original thinkers and artists of the highest achievement can, if properly undermined, allow the proliferation of a culture of non-innovation, a culture of mediocrity and enforced sameness (called, deceptively, “equality”) which would, it goes without saying, be controlled at the top by an elite politically adept class.

The natural family (and all freely chosen association not heavily supervised by the “community” (the corporate / state system) is however, the real target. Eliminate the father, then resistance to top-down “change” (totalitarian control of the masses) becomes possible (see noted on Ferdinand Mount’s important 1982 book, “The Subversive Family”).

Social justice requires “politically correct” speech that must be enforced by the believers in the orthodox dogmas of  “social justice” collectivist ideology.

Individual freedom, rule by the people (republicanism), free speech, due process, private property are counter to the collectivist ideal.

Most people born after about 1970 in the US and much of the West have been brought up with constant “operative conditioning” a technique of indoctrinating that from an early age limits the development of independent thought. It is common for people who are afraid of peer pressure and rejection to misunderstand their affect (their fear of not conforming with accepted group opinion), assuming that their emotional defense of their "opinion" is the same as conviction for an earned opinion independently held, when, in reality, the person who is feeling such strong emotion never actually has taken the opportunity to examine facts objectively – a prerequisite to developing an informed and personally earned and held, opinion.

The cure for this condition is open-mined, intellectually curious, broad self-education.