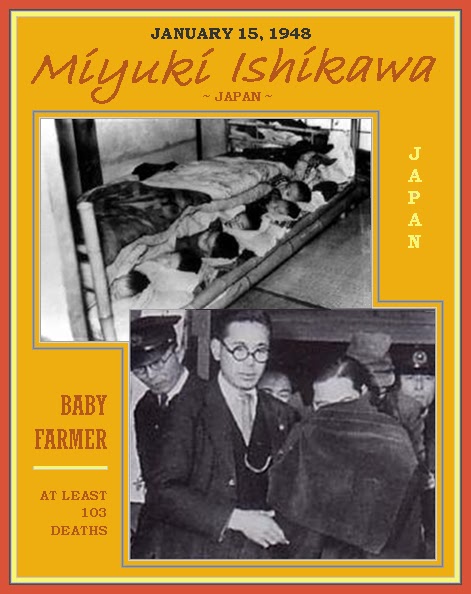 From Wikipedia : Miyuki Ishikawa, born 1897, date of death unknown) was a Japanese midwife and serial killer who is believed to have murdered many infants with the aid of several accomplices throughout the 1940s. It is estimated that her victims numbered between 85 to 169, however the general estimate is 103. When she was finally apprehended, the Tokyo High Court's four-year sentence she received was remarkably light considering that Miyuki's actions resulted in a death toll so high that it remains unrivaled by any other serial killer in Japan. According to a report of Children's Rainbow Center, writer Kenji Yamamoto referred to the incident as "unbelievable and unbearable.”

Ishikawa was born in Kunitomi, Miyazak Prefecture and graduated from the University of Tokyo. She later married Takeshi Ishikawa. The relationship did not produce any children.

She worked as a hospital director in the Kotobuki maternity hospital. She was considered to be a midwife, although no form of midwifery license existed at that time in Japan.

In the 1940s, there were many babies in her maternity hospital, and Miyuki Ishikawa found herself facing what she perceived to be something of a quandary. The parents of many of these infants were poor and unable to raise their children properly without financial struggle, and she herself was unable to help the infants because of a lack of social and charitable services.

In order to solve this dilemma, Ishikawa chose to neglect numerous infants, many of whom died as a direct result of this abuse. The exact number of victims is unknown, but it is estimated that she killed at least 103 babies. Almost all of the other midwives employed by the Kotobuki maternity hospital were disgusted by this practice and resigned from their positions.

Later she also attempted to garner payment for these murders. She and her husband Takeshi solicited large sums of money from the parents, claiming that it would be less than the actual expense of raising these unwanted children. A doctor, Shiro Nakayama, was also complicit in this scheme and aided the couple by falsifying death certificates. The Shinjuku ward office ignored their actions. 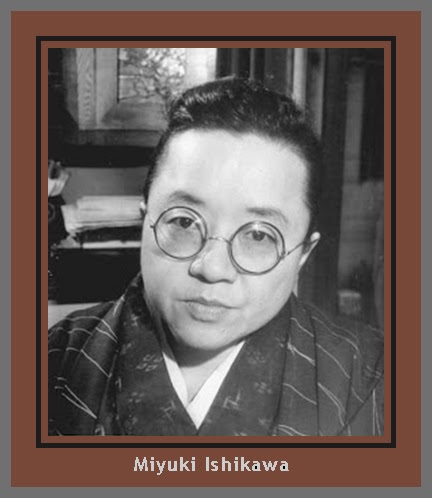 Similar cases had occurred in Japan before this incident. The people of Itabashi were accused in 1930 of murdering 41 foster children. Hatsutarō Kawamata was arrested in 1933 for murdering at least 25 foster children. The Japanese government was aware of this crisis, but did nothing.

Japanese tradition also disputed the rights of infants. Cases of infanticide by a parent had been typically regarded as bodily injury resulting in death under the Criminal Code of Japan until 1907.

Asahi Shimbun on January 17, 1948, describing their suspicion for 169 murders and her admitting "malice aforethought."

Two police officers from the Waseda police station accidentally found the remains of five of Ishikawa's victims on January 12, 1948. Autopsies performed on the bodies of the five babies proved that they had not died of natural causes. She and Takeshi were arrested on January 15, 1948.

The victims were deserted children, and so she insisted that parents were responsible for their deaths. The public supported the assertion, but Yuriko Miyamoto criticized them, saying it was an example of discrimination.

Upon further investigation the police found over 40 dead bodies in the house of a mortician. 30 corpses were later discovered in a temple. The sheer number of dead bodies recovered and the length of time over which the murders took place made it difficult for the authorities to determine the exact number of victims. Consequently, the exact death toll remains unknown.

The authorities viewed her homicides as a crime of omission. In the Tokyo District Court, Ishikawa was sentenced to eight years in prison, Takeshi and Dr. Shiro Nakayama were each sentenced to four years imprisonment. The couple appealed their sentences and in 1952 the Tokyo High Court revoked the original sentence and sentenced Ishikawa to four years in prison and Takeshi to two years.

This incident is regarded as the principal reason the Japanese Government began to consider the legalisation of abortion in Japan. One of the reasons this incident was thought to have occurred was as the result of an increase in the number of unwanted infants born in Japan. On July 13, 1948, the Eugenic Protection Law (now the Mother's Body Protection Law) and a national examination system for midwives was established. On June 24, 1949, abortion for economic reasons was legalised under the Eugenic Protection Law in Japan. 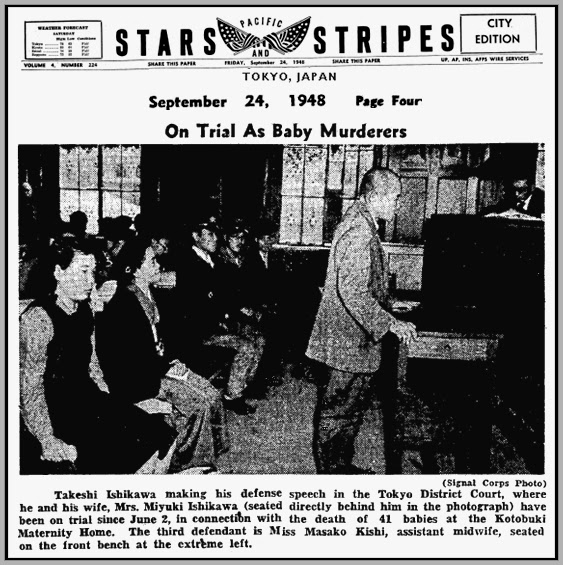 FULL TEXT: Two more persons have been rounded up by the Waseda Police Station in connection with the baby death scandal uncovered last weekend at the Kotobuki Maternity Hospital in Shinjuku, operated by Mrs. Miyuki Ishikawa and her husband Takeshi Ishikawa. This brings the total up to five against whom accusations of wanton neglect and abuse have been made.

The two, new suspects in the case are Dr. Hiro Nakayama, who signed death certificates for 39 of the 41 babies, who died at the home since last July, and Miss Masako Kishi. apprentice midwife to Mrs. Ishikawa, who was interviewed by SCAP investigators and the Stars and Stripes reporter, when the case was uncovered last week. The Ishikawas and an undertaker, Ryutaro Nagasaki, are now confined in the police station jail.

According to a report by Isamu Ide (Waseda Station Police chief, who originally uncovered the case), yesterday afternoon to Milton J. Evans, chief of the Welfare Administration Branch of SCAP’s Public, Health and Welfare Section, Dr. Nakayama claimed that when he had been called into consultation by the Ishikawas, the child in question had always been in a condition too far gone for medical help. He denied having accepted any fees for the 39 death certificates signed.

This did not agree with Mr. Ishikawa’s testimony, who charged that Dr. Nakayama has on several occasions received payments amounting to 1,000 yen apiece, in addition to numerous other “presentos.”

Of the six babies who died since the New Year now undergoing autopsies at Keio University, four have been reported as having died from starvation. The five surviving babies removed from the home-to the First National Hospital, were visited yesterday by a representative of the Tokyo Military Government, who reports them all to be in critical condition, suffering from malnutrition, pneumonia, bronchitis and skin diseases.

As a result of the Tokyo Military Government investigation, the Tokyo Public Health office reports that the licenses of two doctors and three midwives connected with the maternity hospital have been revoked. 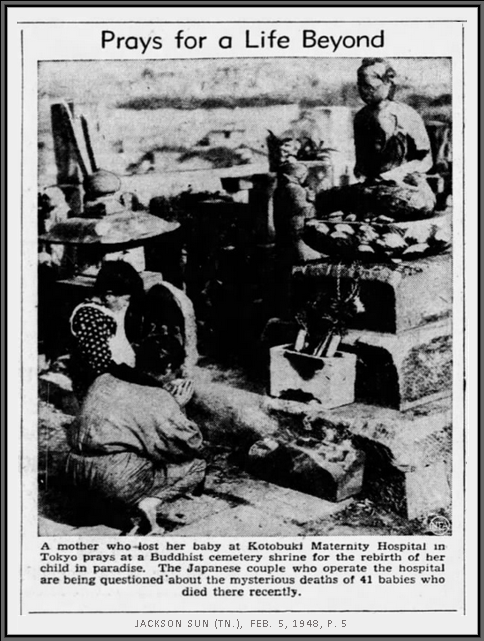 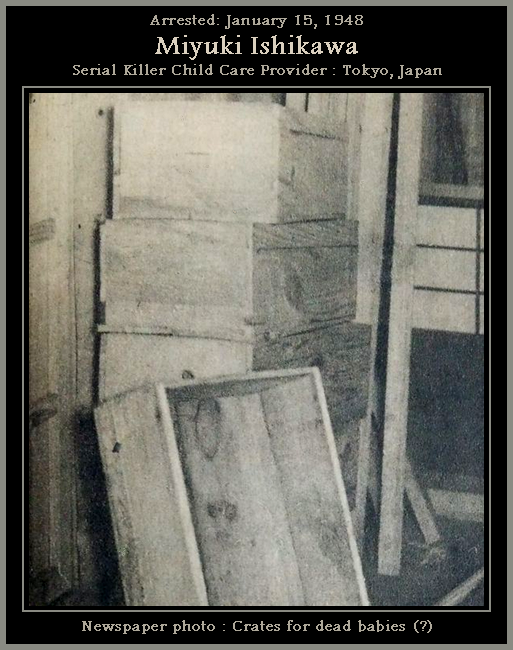 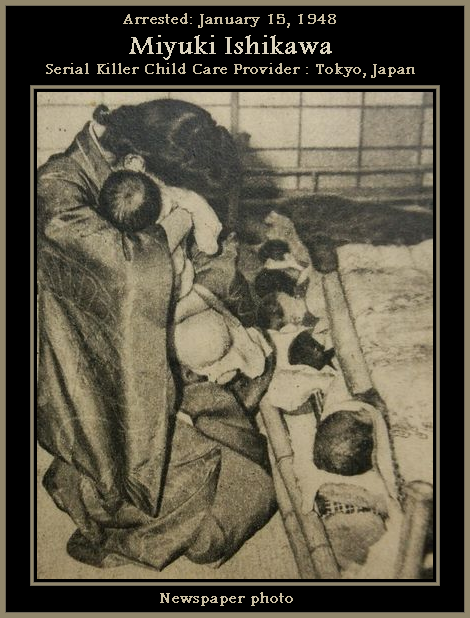 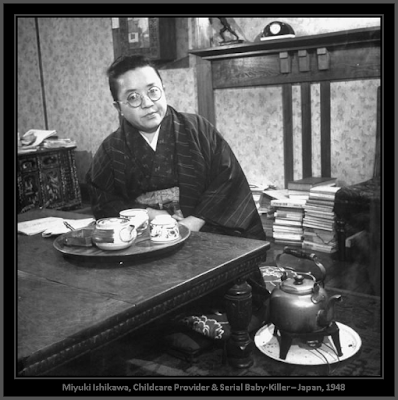 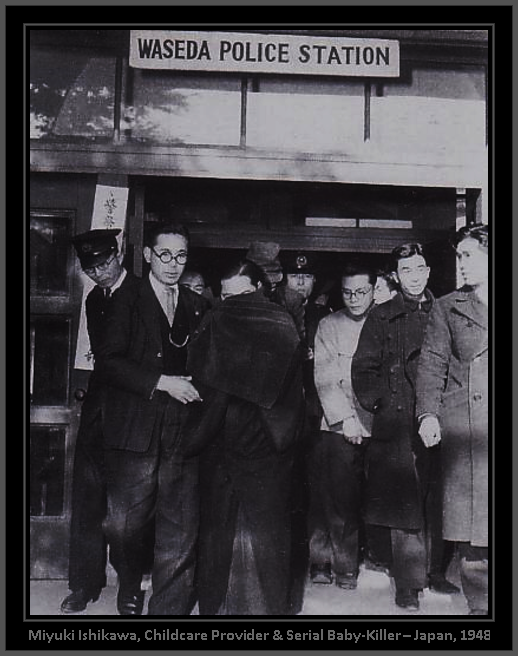 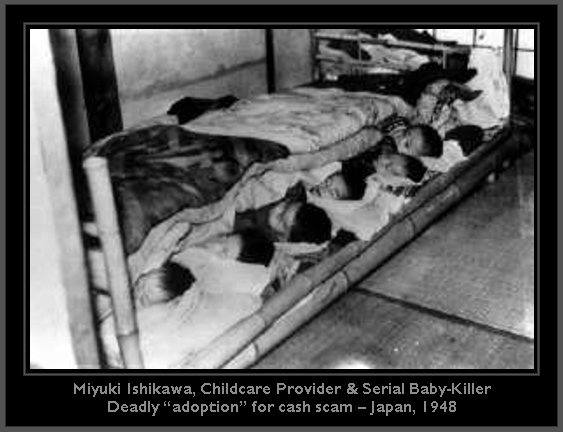 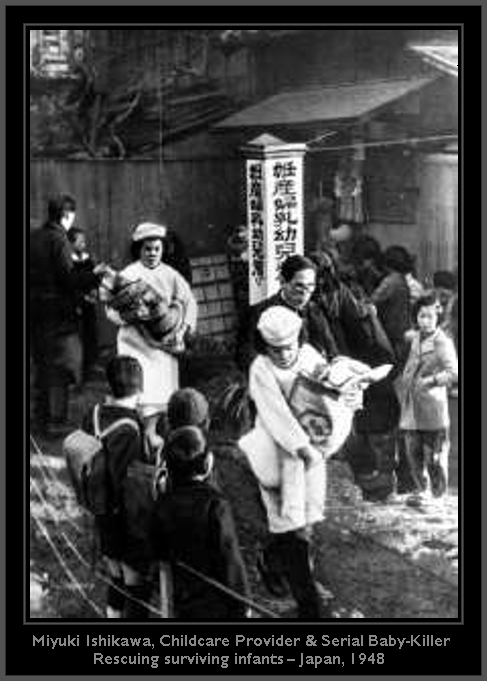 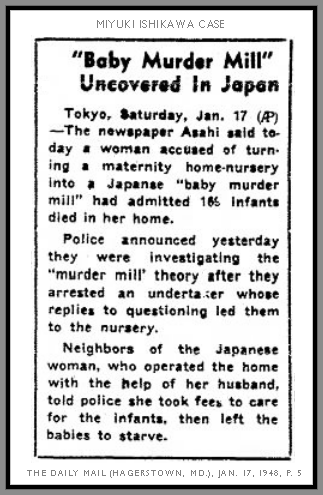