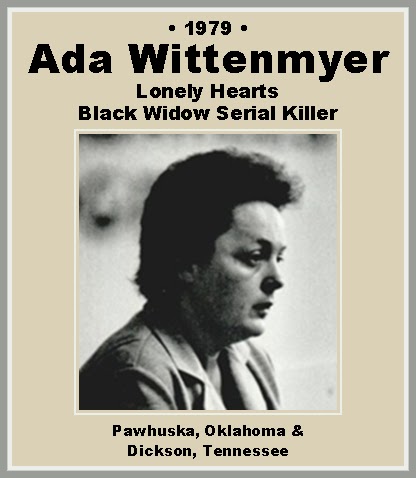 NOTE: Research for UHoM has turned up hundreds of forgotten female serial killers including a large number of Black Widows, women who murdered two or more husbands. The Ada Wittenmyer is a case of relatively recent date: she died while awaiting trial in 1984. Normally, one would expect such a recent case to have been included in current lists of female serial killers. Yet the case does not.

This case has the particular value of offering a clearly stated m.o. delineating not only a clear-cut strategy of exploiting men through offering companionship and/or sex, a common feature of black widow serial killer cases, but also in disclosing the corollary sadistic motive. When the Alimony Reform League did a study in 1935 of motivations of women who sought to have husbands for failing  to pay alimony  the stunning outcome was that sadistic pleasure in seeing the man suffer overrode, in the majority of cases, the need – or desire – for additional cash.

In looking at cases of maternal filicide during child custody disputes, there are other documented cases showing a motivation of sadistic pleasure, not in the enjoyment in watching the murdered children’s suffering, but in depriving the targeted man, the father of their children, for suffering. This scenario is matched, of course, in cases where a father is perpetrator.

As is now well-known, studies of false rape accusations and child-father access denial (including outright parental kidnapping), initiated by members of the Men’s Rights Movement and Fathers’ Rights Movement, reveal that sadistic pleasure in the counterpart’s suffering is a common motive.

Statements of motive made by female serial killers are scarce. Jane Toppan represents one of the few cases where the murderess has described her intense pleasure in watching her victims die.

The plump, 33-year-old brunette, last seen near Gallatin, Tenn., two weeks ago, is already wanted for the murder of her fourth husband, John L. Wittenmyer, 62, a wealthy Oklahoma antique dealer and rancher.

The couple married three years ago, two weeks after she answered his ad in a “lonely hearts” magazine.

Wittenmyer died March 28, just one day after he signed a handwritten will leaving the bulk of the cattle ranching estate to his wife, Oklahoma officials said.

Suspicious authorities ordered the body of Mrs. Wittenmyer’s third husband – William Clifford Hayes, who died five years ago – exhumed Tuesday from a Nashville cemetery and shipped to Memphis, where an autopsy will be performed by the state medical examiner.

Mrs. Wittenmyer told police she found her husband dead at the couple’s Bartlesville, Okla., home after she returned from a shopping excursion. At the time, police assumed he died of a heart attack.

But when investigators returned to the home to question Mrs. Wittenmyer further, she was gone. An autopsy then turned up arsenic in the rancher’s body.

Officials said Mrs. Wittenmyer has been married at least four times. Police talked to one of her ex-husbands, but refused to release his identity. 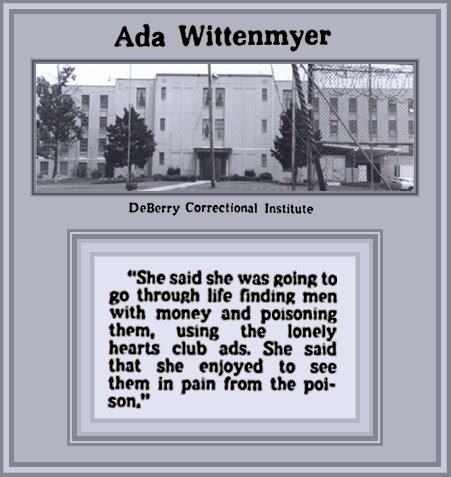 FULL TEXT (Article 2 of 3): Nashville, Tenn. – A woman who met men through lonely hearts clubs and poisoned two of her four husbands with arsenic hanged herself with a prison bedsheet and left a note saying “at last I have found peace,” authorities said.

Ada Wittenmyer, 39, was found hanging in her cell Wednesday evening, six days after being sentenced to life in prison for the 1974 murder of her third husband, William Hayes. She had pleaded innocent by reason of insanity.

Hayes’ body was exhumed after Mrs. Wittenmyer’s fourth husband died of arsenic poisoning. She was convicted of that killing in 1982 and sentenced to a 25-year prison term in the poisoning of wealthy Oklahoma rancher John Wittenmyer, whom she met through a lonely hearts club advertisement. Her other two marriages ended in divorce.

Authorities discovered last week that Mrs. Wittenmyer was continuing to correspond with at least one man she had met through a lonely hearts club advertisement.

In one of several handwritten suicide notes she left in her cell at DeBerry Correctional Institute here, Mrs. Wittenmyer said, “I want to remain as I lived – alone.”

In another note, Mrs. Wittenmyer asked prison officials to call her parents and “tell them at last I have found peace,” Warden Aileene Love said.

“I’ve brought shame and disgrace on my family. God knows they tried to love me, but it’s hard to love a mentally ill child that you don’t know what’s wrong with them,” the note said.

Mrs. Wittenmyer was alone in her cell under mandatory segregation at the time of her death, Mrs. Love said. She had been held at DeBerry since last winter to await trial in Hayes’ death.

A DeBerry cellmate testified at last week’s trial that Mrs. Wittenmyer told her about poisoning her two husbands.

“She said she was going to go through life finding men with money and poisoning them, using the lonely hearts club ads. She said that she enjoyed to see them in pain from the poison,” testified Barbara Quaranto, 46, who was convicted in Chattanooga in the shooting death of her 73-year-old husband.

Canadian rancher Henry Joneson said he sent 12 letters and a $1,150 check to Mrs. Wittenmyer before learning last week that the address she had given him was the prison and not the retreat she had told him it was.

The Tomahawk, Alberta, man said he answered Mrs. Wittenmyer’s ad in [an] agricultural publication in April that read: “Widow wishes to start new life – will relocate.”

When Mrs. Wittenmyer telephoned him after her second poisoning conviction, Johnson said he told her,” … I found out everything and goodbye.”

But Roger Hensley, Mrs. Wittenmyer’s first husband, said he did not believe she was mentally ill. “I lived with her off, and on for nine years and she has always known what she was doing,” said Hensley. “She is just mean … She was kind to people, but then she would turn around and be worse than heck.” 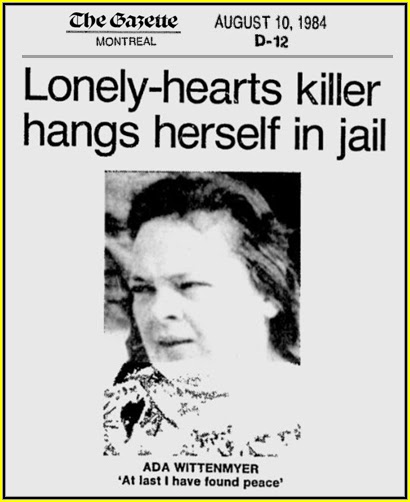 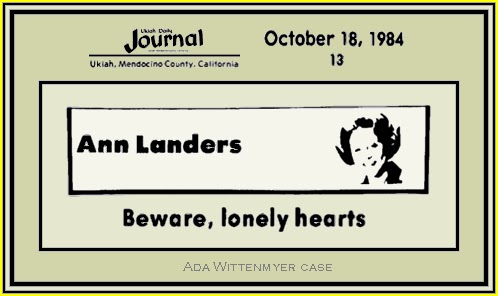 FULL TEXT (Article 3 of 3): Dear Ann Landers: I always thought it was narrow-minded and mean of you to take such a strong stand against lonely-hearts advertisements. I changed my mind today when I read the Nashville Banner.

It seems a man named Henry Joneson of Tomahawk, Alberta (Canada), answered an ad in an agricultural publication. The woman who was looking for a companion was Ada Wittenmyer, age 37. Henry, the 50-year-old over a 900-acre ranch, was lonesome and thought Ada sounded “interesting.” He didn’t realize his letters and checks were going to prison until District Attorney General Kenneth Atkins called and told him that Ada had just been convicted of poisoning her first husband. she already was serving a 25-year term for poisoning her third husband – a wealthy Oklahoma rancher she had met through another lonely-hearts ad. Atkins said that when he told him the news Mr. Joneson said, “Oh, Lord.”

I hope you will print this letter in your column, Ann, as a warning to others who are lonely. And please accept my apologies for my previous attitude. – Nashville Reader

Dear Reader: Nothing I might have said could have had the import of your report. I checked it out with Nashville and every detail was right on. Thanks for the backup. 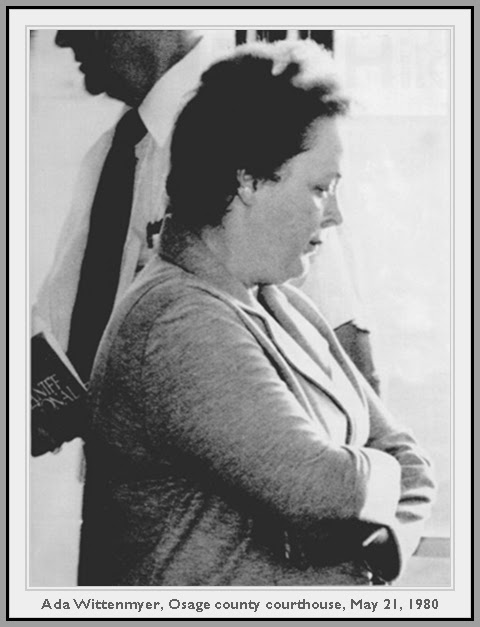 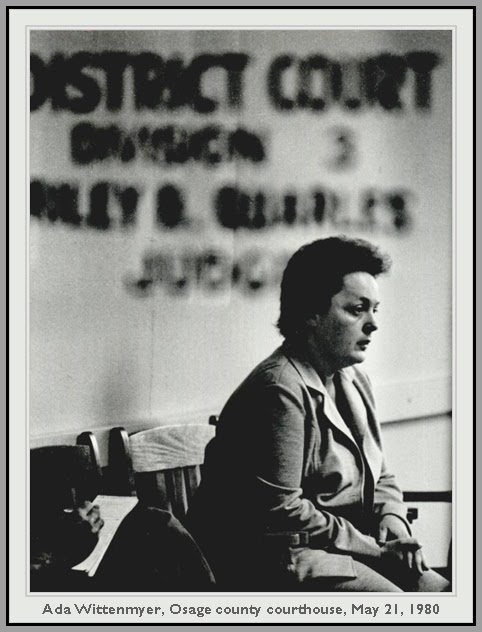 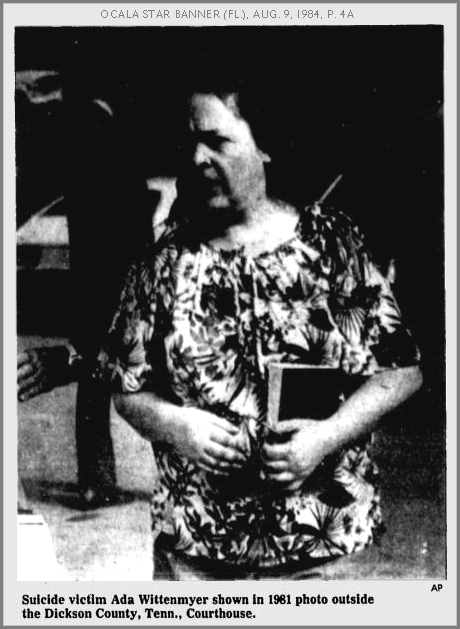 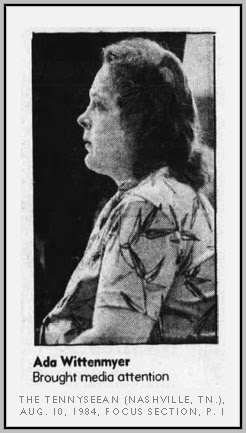 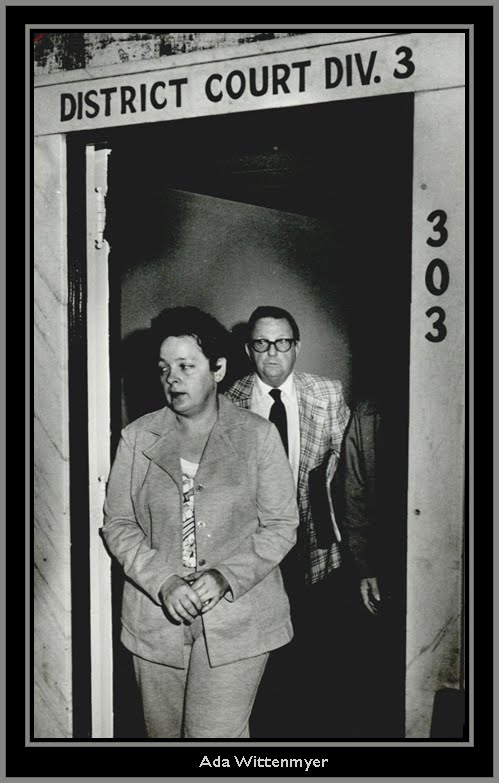 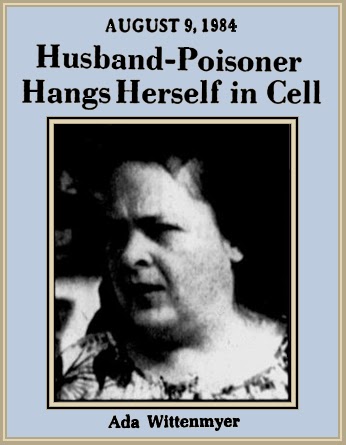