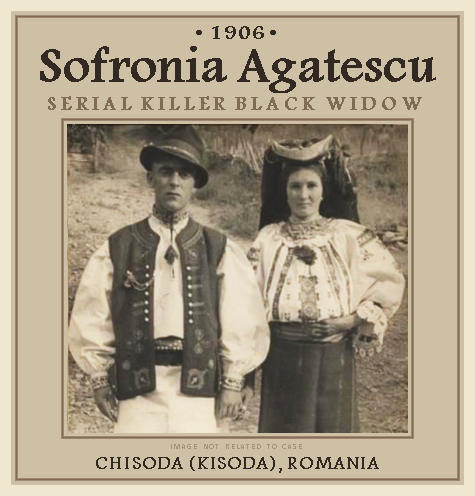 FULL TEXT (translated from German): We are told from Temesvar: In the municipality of Kisoda [Chisoda], the wealthy Romanian widow Sofronia Agatescu was arrested by order of the Temesvar Court. She appears accused of poisoning her husband, who died three weeks ago.

Now voices are also being voiced which claim that she also eliminated her former two spouses with poison. As is well known, poisoning was common in the area around Temesvar years ago. A large gang of poisoners wreaked havoc and it is believed that the widow Agatescu was also connected to it.* 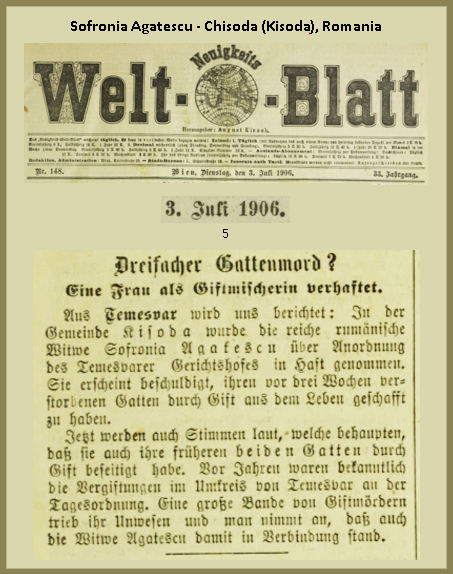 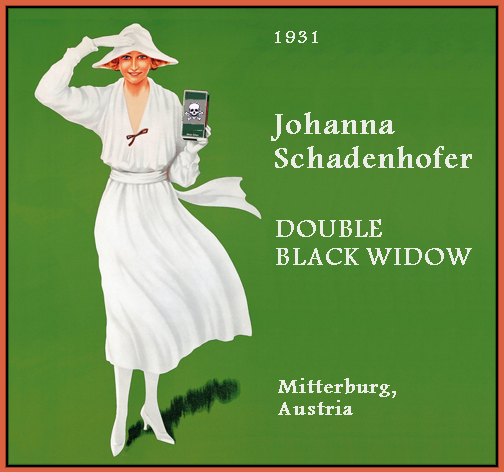 FULL TEXT (translated from German): From Ybbs on the Danube it is reported: The farmer Johann Schadenhofer in Mitterburg near Ybbs married the widowed business owner Johanna Kohlhuber in 1929. Marriage became more and more unhappy over time due to property law differences. The man had brought a fortune of 6,000 Shillings into the marriage, for which the woman had promised to have him registered as a co-owner of the economic activity belonging to her. After the marriage, she did not keep this promise, but assured him a sum of 4500 Shillings and free meals. After the woman had married off her daughter from her first marriage, the man stood as a superfluous mouth who was just in the way. In the past few weeks, Johann Schadenhofer has been repeatedly attacked by serious symptoms after enjoying the coffee that his wife gave him. He finally arranged for a chemical test to be carried out on such a portion of coffee, and it was found that the coffee contained thalin [naphthalin] as a poison used to destroy mice and rats. After the whole situation no other staff the wife opportunity u. Interested in mixing the poison into the coffee, the police arrested Johanna Schadenhofer an Ybbs and, despite her denial, delivered one to the Ybbs district court.

FULL TEXT (translated from German): St. Pölten, April 14th. - A strange murder trial is bothering the jury today. The 59-year-old business owner Johanna Schadenhofer is accused. She was married to three men. Two died from it. One by poison, the other by suicide because he could no longer stand it by her side, and the third had only a lucky coincidence to thank him for escaping the poisoner.

The indictment describes the following facts: On February 7, 1910, Johanna Schruf, as the girl was called, married the then 45-year-old widower Josef Klammer, who owned an inn. Reading the two spouses together was not the best. On August 3, 1915, Joef Klammer horribly committed suicide by cutting his neck with a knife.

The widow didn't even wait for the funeral service. She soon consoled herself. Ten months after the death of the staple, in May 1916, she married the farmer Franz Kohlhuber, who had a registration in Mitterburg. He was also a widower and had some children from his first marriage. Johanna Kohlhuber, as the suspect was now called, was also written on the house, but remained the owner of the property that she inherited after her first husband until she sold it for 8,000 K. in 1917, although she did a kept large five yoke forest segment to herself.

Towards the end of 1927, Franz Kohlhuber began to suffer and nobody knew the cause of his illness, only he was clear. Not only once, he said repeatedly that he was afraid of the food his wife was preparing for him because he suspected it was poisoned. The following incident shows how right Franz Kohlhuber was with his suspicions:

The doctor treating him prescribed medicine, of which he should take ten drops three times a day. Johanna Kohlhuber, however, wanted to force her husband to eat a tablespoon every two hours, with the intention that the poison contained in the medication would then have a fine effect. Franz Kohlhuber then refused to accept any medicine at all. On April 5, 1928, he succumbed to the "care" of his wife.

Why Franz Kohlhuber was kept alive by his relatives during his lifetime and also after his death, and why Franz Kohlhuber died fourteen days after his son was no longer allowed to look after him, did not become clear until 1931, when the suspicions expressed by Fran Kohlhuber faded, he was poisoned, actuated. The exhumation of the body, which took place on September 5, 1931, had the surprising result that a large amount of barium was found in it, so that it could not be doubted that Franz Kohlhusber was the cause of a barium poisoning. The universal heir to Kohlhuber was the widow again and the children from his first marriage had to be together with 1500 Schillings to be satisfied.

In Mardi Gras in 1929, ten months after the death of her second husband, Johanna Kohlhuber married Johann Schadenhofer. The latter had an inn, which he gave to a daughter after the death of his first wife, who also married her father at the Carnival in 1929. Schadenhofer brought 8,000 Schillings cash into the marriage, a calf, cereals and hay, and gave this to his wife against the promise that half of the letters would be written to him at home. Johann Schadenhofer put 1,000 Schillings of the proceeds from the heap of a meadow into his wife's business.

As long as Schadenhofer had money, living with his wife was just about possible. It became different when he ran out of money and pushed for the cover letter. A lawyer between the two spouses was one of the same and granted him a kind of security.

Between Christmas and New Year in 1931, Schadenhofer presented her husband's living room for supper, which he had to eat alone because his wife had told him that the housewives had eaten earlier. Immediately after enjoying the dumplings he felt sick. It is clear that these dumplings were poisoned. At Easter 1931 Schadenhofer left the house and went to work outside and only returned every Saturday. As often as he came home, his wife presented him with a coffee that smelled bad. He poured the coffee away several times. But once he filled it into a bottle that he had cleaned before and took it to the gendarmerie.

Chemical analysis of the beverage revealed that it had added thallium sulfate, a common rat killer. Since only Johanna Schadenhofer made the coffee for her husband, it was clear that it was only she who had mixed the poison into the coffee. She was therefore arrested and brought to the St. Pölten district court. In the course of the investigation, the death of the second husband was also considered. The suspect denies having eliminated her second husband and trying to kill her third husband.

(Continued in the morning paper.)

FULL TEXT (translated from German): St. Pölten, 16. April. - The trial against the poisoner Johanna Schadenhofer ended this morning in the morning.

When the verdict was pronounced, the accused suffered a nervous breakdown. 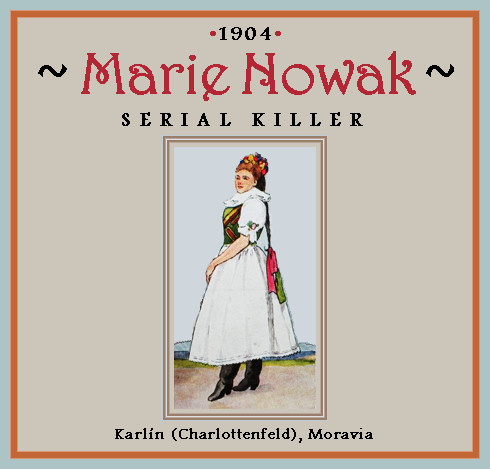 FULL TEXT: The district court Steinitz in Moravia was delivered on Friday with the horrible Marie Nowak from Charlottenfeld, under the terrible suspicion of having dispatched her three husbands from the world. This reasoning is based on the following circumstances: Her first husband Jakob Spaniel was found hanged on December 9, 1897 in his house, her second husband Daniek died suddenly on February 10, 1901, and her third husband Nowak was on the 3rd of this month found hanged in his stable.

The latter had told the head of the community, F. Praschek, that if he died, his body should be autopsied, since he feared that his wife would poison him. And the custodian Skumal states that Marie Nowak had given her permission to pour something into the brandy given to her second husband because of his alcoholism. The gendarmerie found a pot with a phosphor solution at Nowak’s place, who was known to have been at odds with all three men.