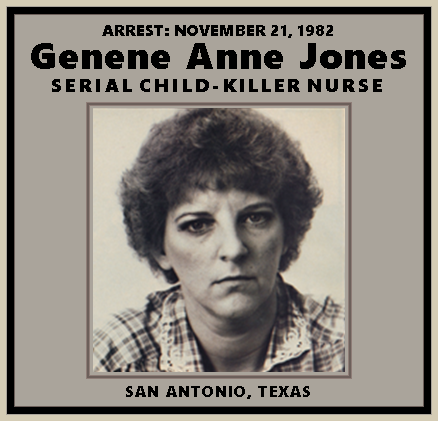 Because Genene Anne Jones was mobile, moving around Texas to work in different clinics, authorities expect she may be responsible for as many as 46 deaths.

Wikipedia – Genene Anne Jones (born July 13, 1950) is a former pediatric nurse who killed somewhere between 11 and 46 infants and children in her care. She used injections of digoxin, heparin and later succinylcholine to induce medical crises in her patients, with the intention of reviving them afterward in order to receive praise and attention.
These medications are known to cause heart paralysis and other complications when given as an overdose. Many children however, did not survive the initial attack and could not be revived. The exact number of murders remain unknown, as hospital officials allegedly first misplaced then destroyed records of her activities to prevent further litigation after Jones' first conviction.

While working at the Bexar County Hospital (now The University Hospital of San Antonio) in the Pediatric Intensive care unit, it was determined that a statistically inordinate number of children Jones worked with were dying. Rather than pursue further investigation the hospital simply asked Jones to resign, which she did.

She then took a position at a pediatric physician's clinic in Kerrville, Texas, near San Antonio. It was here that she was charged with poisoning six children. The doctor in the office discovered puncture marks in a bottle of succinylcholine in the drug storage, where only she and Jones had access. Contents of the apparently full bottle were later found to be diluted. Jones claimed to have been acting in the best interests of her patients, as she was trying to justify the need for a pediatric intensive-care unit in Kerrville. This act was not a successful means of achieving her goal.

As of May 2016, Jones was held at the Lane Murray Unit of the Texas Department of Criminal Justice. She had been scheduled for mandatory release in 2018 due to a Texas law meant to prevent prison overcrowding. To avoid this, Jones was indicted on May 25, 2017, for the murder of 11-month-old Joshua Sawyer. Nico LaHood, Bexar County District Attorney, stated that additional charges could be filed in the deaths of other children. Due to the mandatory early-release law covering Jones' original convictions, she would otherwise have been released upon completion of a third of the original sentence. The new charges were filed to avoid her release. In April 2018, a judge in San Antonio denied a request to dismiss five new murder indictments against Jones. On 16 January 2020, Jones pleaded guilty to the murder of 11-month-old Joshua Sawyer on 12 December 1981 as part of a plea deal in which four other charges were dropped. She was sentenced to life in prison. She won't be eligible for parole until she's roughly 87 years old.

She was portrayed by Susan Ruttan in the television movie Deadly Medicine (1991) and by Alicia Bartya in the straight-to-video movie Mass Murder (film) (2002). She was also featured in a Discovery Channel documentary, Lethal Injection, and was said to have inspired Annie Wilkes from Stephen King's Misery.


Dec. 22, 1981 – Doraelia Rios (25 mo), died at 8:12 p.m. She had been hospitalized several times previously for gastrointestinal surgery, and she entered the hospital again on Dec. 21, suffering from diarrhea, dehydration, and possible inflammation of an internal membrane.
Jan. 9, 1982: 4-week-old Rolando Santos is injected with the blood thinner heparin at Medical Center Hospital.
Jan. 17, 1982 – Patrick Zavala (4 mo.) dies. (Jones indicted Jun. 29, 2017)
Sep. 17, 1982 – Chelsea McClellan (15 mo.) murdered. (b Jun. 16, 1981).
Aug. 27 1982 – Brandy Lee Benites (1 mo.) survived attack by Jones.
Aug. 30, 1982 – Christopher Parker (4 mo.) survived attack by Jones.
Sep. 3, 1982 – Misty Reichenau (21 mo.), survived attack by Jones.
Sep. 23, 1982 – Rolinda Ruff (5 mo.), survived drugging by Jones.
Oct. 21, 1982 – Jimmy Pearson (7 yr.) dies.
Nov. 21, 1982 – Jones was indicted in San Antonio, on charges of injuring four-week-old Rolando Santos by deliberately injecting him with heparin, an anticoagulant, in January 1982. Santos had been undergoing treatment for pneumonia when he suffered "spontaneous" hemorrhaging, but physicians managed to save his life.
Feb. 1983 – a special grand jury convened in San Antonio, Texas, investigating the "suspicious" deaths of 47 children at Bexar County's Medical Center Hospital over the past four years.
Feb. 15, 1984 – Jones sentenced to 90 years in prison.
Mar. 1984 – Jones suspected in at least ten other homicides, Jones was spared further prosecution when Bexar County hospital administrators shredded 9,000 pounds of pharmaceutical records in March 1984, destroying numerous pieces of evidence then under subpoena by the local grand jury.
Oct. 24, 1984 – Jones sentenced to concurrent 60 years term.
1985 – Jones was sentenced to 99 years in prison for killing 15-month-old Chelsea McClellan with succinylcholine.
May 25, 2017 – indicted for the murder of 11-month-old Joshua Sawyer.
Apr. 2018, a judge in San Antonio denied a request to dismiss five new murder indictments against Jones.
Jan. 16, 2020 – Jones pleaded guilty to the murder of 11-month-old Joshua Sawyer on Dec. 12, 1981 as part of a plea deal in which four other charges were dropped. 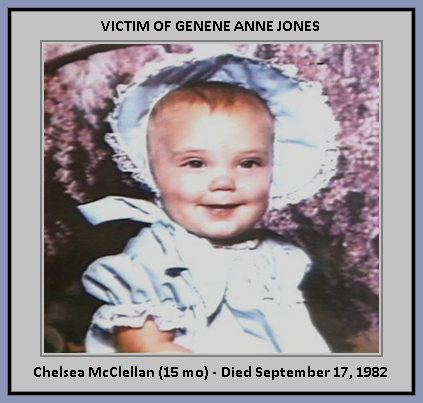 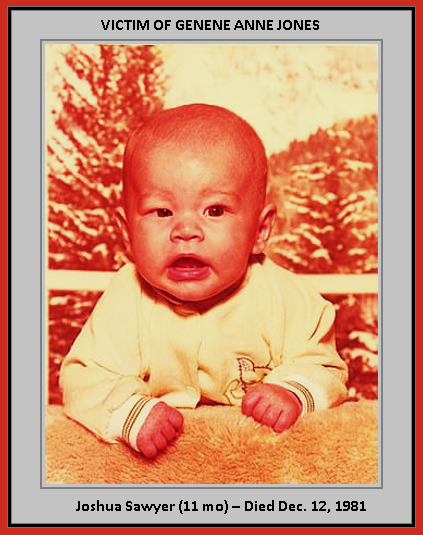 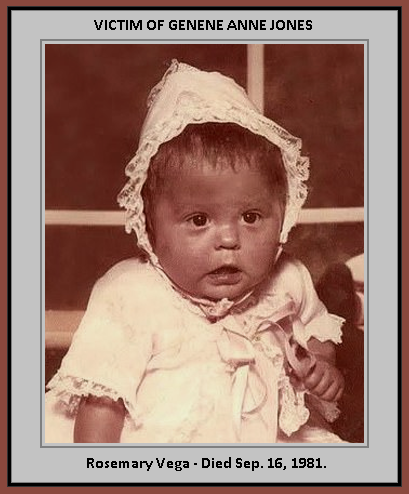 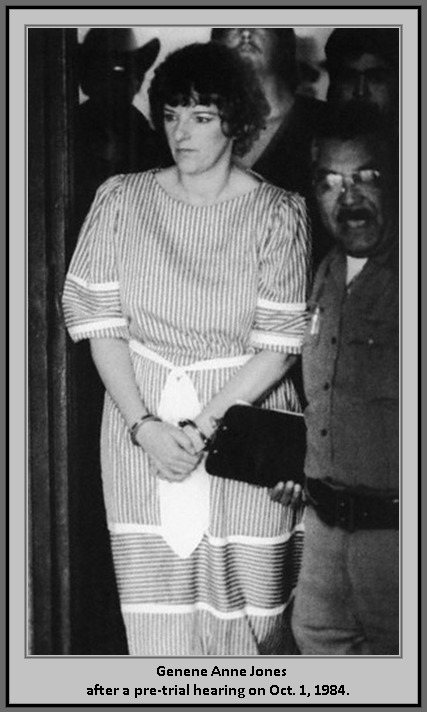 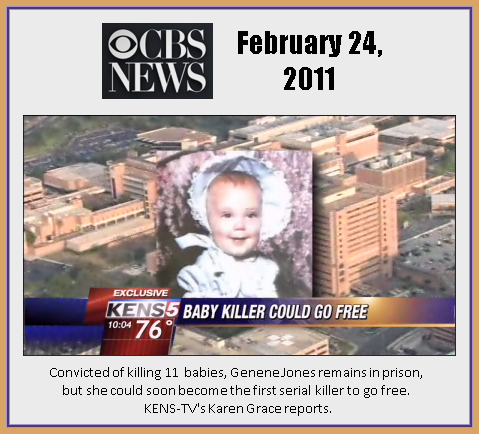 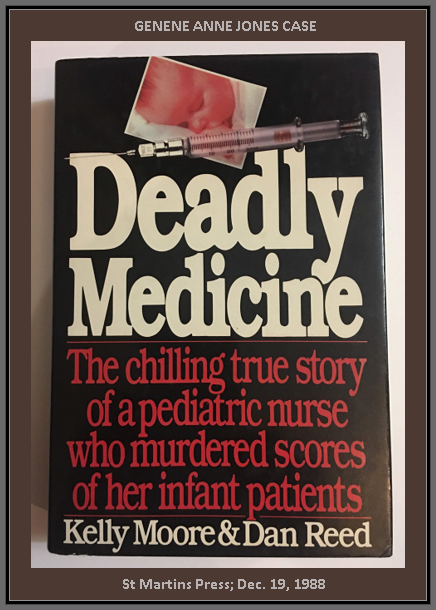 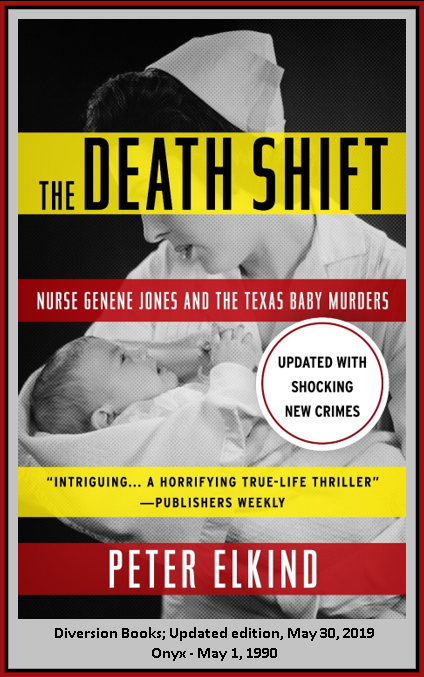