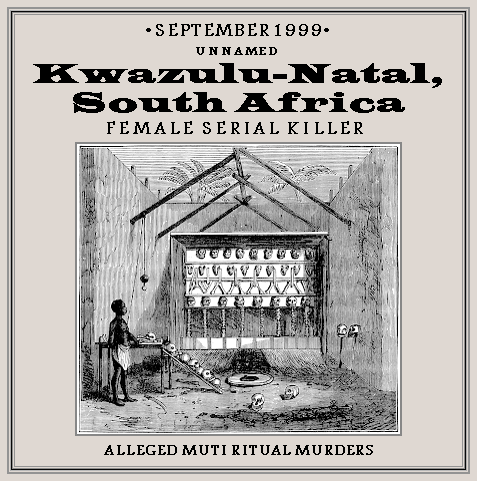 A case of a female serial killer, active 1985-99, is listed in The Encyclopedia of Serial Killers, under the label “undisclosed” (1948-).” It describes a 14-year span of muti ritual killings.

EXCERPT: The Human Rights League investigated the muti-murders in [2008] in a study titled the Trafficking Body Parts in Mozambique and South Africa. One of the interview samples included in the report was of a case in Bloemspruit where a woman who wanted to become pregnant went to a “sangoma” (witch doctor) who provided her with a magical belt to wear. Dangling from the belt were children’s fingers and penises.

“She was made to drink a concoction she believed contained human blood and fat and she was given a piece of flesh which she believed to be a human organ, perhaps a heart. She sliced small pieces from the flesh each night and fried them on a stove.”