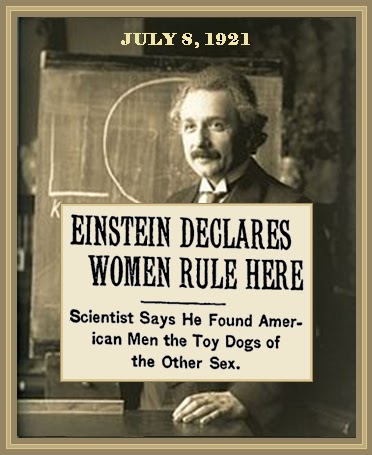 Dear Reader: If you happen to member of either of the following communities – Toy Dog, Type 1 (mangina) or a Toy Dog Type 2 (white knight) – you should not read the rest of this post.

FULL TEXT: Berlin, July 7. – Dr. Albert Einstein, the famous scientist, made an amazing discovery relative to America on his trip which he recently explained to a sympathetic-looking Hollander as follows:

“The excessive enthusiasm for me in America appears to be typically American. And if I grasp it correctly the reason is that the people in America are as colossally bored, very much more than is the case with us. After all, there is so little for them there!” he exclaimed.

Dr. Einstein said this with vibrant sympathy. He continued:

“New York, Boston, Chicago and other cities have their theatres and concerts, but for the rest? There are cities with 1,000,000 inhabitants. Despite which what poverty, intellectual poverty! The people are, therefore, glad when something is given them with which they can play and over which they can enthuse. And that they do, then, with monstrous intensity.

“Above all things there are the women who, as a literal fact, dominate the entire life in America. The men take an interest in absolutely nothing at all. They work and work, the like of which I have never seen anywhere yet. For the rest they are the toy dogs of the women, who spend the money in a most unmeasurable, illimitable way and wrap themselves in a fog of extravagance. They do everything which is the vogue and now quite by chance they have thrown themselves on the Einstein fashion.”

“You ask whether it makes a ludicrous impression on me to observe the excitement of the crowd for my teaching and my theory, of which it, after all, understandable nothing? I find it funny and at the same time interesting to observe the game.”

“I believe quite positively that it is the mysteriousness of what they cannot conceive which places them under a magic spell. One tells them of something big which will influence all future life, of a theory which only a small group, highly learned, can comprehend. Big names are mentioned of men who made discoveries, of which the crowd grasps nothing. But it impresses them, takes on color and the magic power of mystery, and thus one becomes enthusiastic and excited.”

Email ThisBlogThis!Share to TwitterShare to FacebookShare to Pinterest
Labels: Relativity