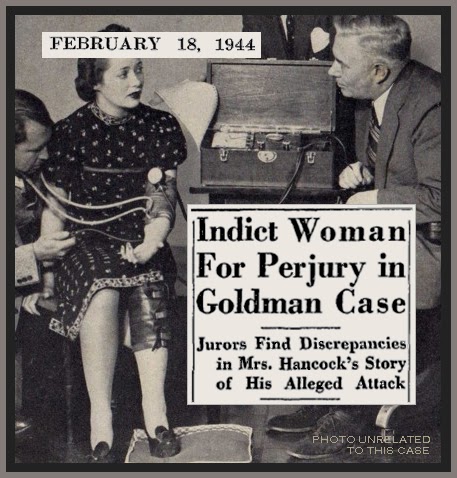 The indictment against Mr. Goldman, who was convicted last fall on Mrs. Hancock’s charges and as a result faced a possible ten years in Sing Sing, was dismissed last Tuesday,  by Judge Samuel S. Leibowitz, of Kings County Court, who at the same time ordered Mrs. Hancock held in $25,000 on a perjury charge.

According to Mrs. Hancock the attempted attack took place at the nurses’ home in the Brooklyn Hospital, 681 Clarkson Avenue, Brooklyn, where she was employed.

Mrs. Hancock, who is being held in the Women’s House of Detention in Manhattan, was in court yesterday to hear the indictment read. Her lawyer, Vincent O’Connor, asked that pleading be postponed until Monday. Judge Leibowitz again fixed bail at $25,000.

Mr. O’Connor later told reporters that Mrs. Hancock had sent a telegram to her husband, William Clark Hancock, a Seabee, stationed in Dansfield, R. I., asking him to try to get leave to come to New York for the trial.

A perjury conviction could bring five years in prison on a $25,000 fine.