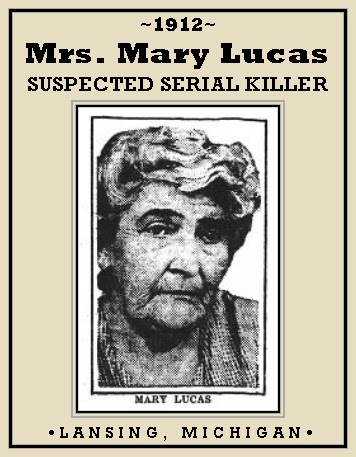 The reports on this case found so far are quite incomplete in their description of the investigation of two suspicious disappearances. Mary Lucas confessed to one murder and served about 19 years in prison before being pardoned.

FULL TEXT (Article 1 of 4): Lansing, Mich., December 10. – The alleged confession in jail here today of Mrs. Mary Lucas, a former Fort Scott, Nebraska, attorney, that she killed her boarder, Mrs. Pauline Fingel, with poison last Friday night [Dec. 6], caused the officers to make a hasty but extensive investigation in the Lucas home for possible evidence in connection with the disappearance of a Lansing contractor. A quantity of quicklime was discovered underneath the cellar.

According to the officers Carl Miller, the contractor, was last seen in the Lucas home here a little more than a year ago. The police also assert that Mrs. Lucas husband died about two years ago under mysterious circumstances in Fort Scott. His body was found in a bath tub in their home.

It is alleged that jealousy, in which a male boarder figured, and robbery, were the motives for the Fingel crime.

FULL TEXT (Article 2 of 4): Lansing, Mich., Dec. 11. – Mrs. Mary Lucas confessed here today to having poisoned Mrs. Pauline Singel [sic], pleading that the act was justified. She denied that she had murdered other persons, but the police are digging up the cellar of her home here, in the belief that her case rivals that of the Gunness murders.

Carl Miller, a boarder at the Lucas home, disappeared seven months ago and the police assert the woman later sought to gain possession of his property. Some time ago Mrs. Lucas and her husband went to Nebraska, the woman returning here alone, saying her husband had died suddenly.

FULL TEXT (Article 3 of 4): Lansing, Mich., April 9. – Mrs. Mary Lucas, 60, a widow, was found guilty of murder in the first degree and sentenced  to life imprisonment for having poisoned Mrs. Pauline Fingel. The women were neighbors. Jealousy shown Mrs. Fingel by a boarder in the Lucas home was given as the reason for the crime.

[“Convict Woman Of Poisoning Rival – Boarding House Romance Given as the Cause of a Michigan Murder.” The Milwaukee Journal (Wi.), Apr. 9, 1913, p. 1]

Following is the text of brief caption from widely syndicated photo from 1921. The text refers to a 1913 murder conviction “for the murder of her husband.” This is, apparently, an error. No news of a trial for the murder of the missing husband, who was thought to have been murdered by Mary Lucas, has turned up in our research so far.

FULL TEXT (Article 4 of 4): The final official act of Governor Sleeper of Michigan, before his term ended, was to sign a pardon for Mrs. Mary Lucas, 74, who was serving a life term in the Detroit House of Correction for the murder of her husband in 1913. 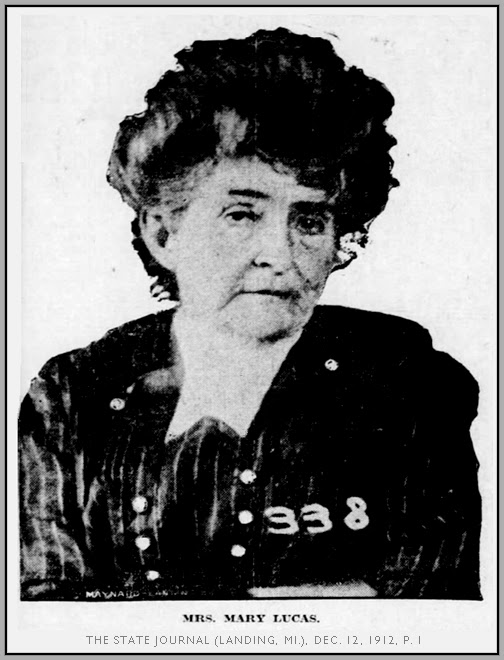 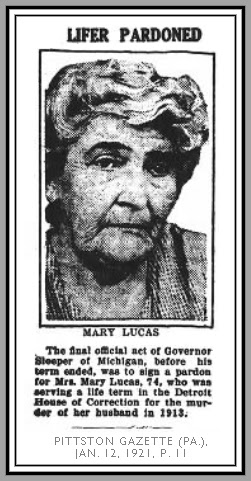 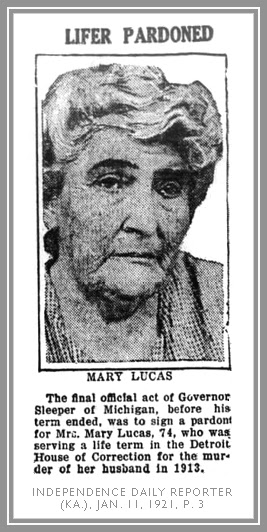