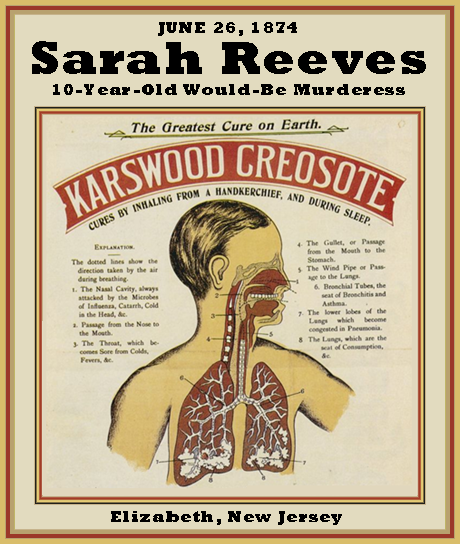 FULL TEXT: New York, June 26. – Sarah Reeves a colored girl, ten years old, was arrested at Elizabeth, N. J., for attempting to poison the family of John R. Miller, of Crawford, by putting creosote in their coffee, which caused violent pains. The girl alleges she did the deed as revenge for ill-treatment, and shows no sorrow for the act.

FULL TEXT: A young negress, barely ten years old. named Sarah Jane Reeves, has just succeeded in attracting attention as a first-class poisoner. Three years ago she came to flew Jersey with her mother, ana, at her death, took refuge in the poor-house, a few month sloe she was taken out of that institution by Mr. Miller, of Cranford who employed her as an attendant upon his children. It would appear that tale colored damsel, soon after her elevation to the post or nurse, manifested an exceedingly turbulent spirit. She was remonstrated with. by her employer, who on several occasions, it seems, cautioned her against her boisterous demonstrations. But the little girl took it to heart, and yesterday morning, when the family, consisting or Mr. Miller, his wife and two other persons, sat down to breakfast, somebody commented on the very peculiar odor which issued from the coffee pot. Only one partook of the beverage, the immediate result being violent pains in the stomach. A physician was of course sent for, and, the usual remedies having been applied, the ailing person was placed out of danger. On examination it was ascertained that the coffee contained enough creosote to kill twenty persons. At the first alarm the negress fled, but when subsequently arrested admitted that she bad poisoned the milk and coffee in order, as she said, to get rid of her enemies. She is now lodged in the county jail. She accused her master with having beaten her with the butt end of a cowhide simply because she had been in the habit of talking to herself. When stripped at the jail three marks were found on her left arm, apparently inflicted by a whip. She evinced no sorrow for the attempt, and laughingly remarked to a fellow-prisoner that she "merely tried to shut her master's mouth for sure." The escape of Mr. Miller's family is regarded as almost miraculous.