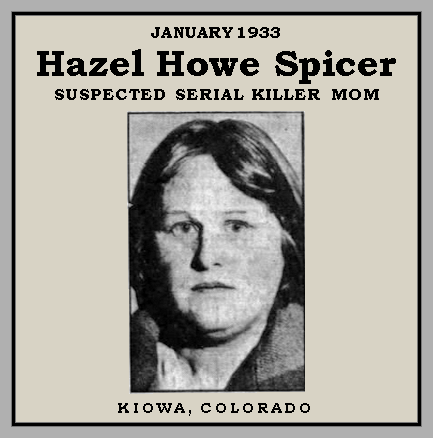 At the end of a long grilling in the Elbert county jail here, Mrs. Spicer admitted she smothered the babe and told her husband, Frank Spicer, that the child was strangled by a piece of apple.

Truitt said she also confessed that she slashed the throat of another child, four-year-old George Spicer, with a piece of glass. The boy was not injured seriously.

The woman, who escaped from a woman deputy sheriff Saturday night, was found Sunday wandering on the prairie near Elizabeth, Colo., where she was arrested Saturday. Truitt said he and G. R. Brown, sheriff of Elbert county, questioned the woman in the jail basement until she confessed the child's death.

Mrs. Spicer was quoted by Truitt as saying she smothered the baby for fear her husband would drive her away from home and she would never be able to see the child again. Truitt said she sobbed hysterically as she declared she had been driven to the act because she could “never be able to go on living with her children taken from her” as she asserted two children by a former marriage had been.

"I felt so badly about this before little Doris was even cold that I wished I hadn't started to do it."

Truitt quoted her. "I hoped her father could bring her back to life. I knew that he would beat me up or try to kill me If he thought I was to blame."

A moment later, Truitt said, she cried: "But now I'm glad she is dead because nobody else will ever get her."

Truitt said she signed a formal confession of the slaying in which she related how she smothered the child and then, thinking her husband might possibly revive her, bit off a piece of apple which she pushed into the girl's throat.

The same confession, Truitt said, related that she knew more of the death of her 21-months-old son who was drowned in a well near Boulder, Colo., than she had told. She told him, Truitt declared, that the boy fell into the well and she was unable to rescue him. Fearing her husband's wrath, she said, she placed a heavy metal covering over the well. The body was found by the husband, Frank Spicer, several hours later.

Mrs. Spicer's explanation of the slashing of George's neck was this, Truitt said:

"I did it, but I only wanted to hurt him enough so that my husband would take us to town to a doctor so we wouldn't have to come back."

The child accused his mother of the attack on him Saturday but she denied it until after she had began her confession here Sunday night, Truitt said.

Mrs. Spicer, who Truitt said he believed was unbalanced pleaded to be sent to a hospital instead of to jail.

Truitt said he would attempt to find means of placing her in an insane asylum instead of trying her for murder.

Mrs. Spicer told Truitt how she spent the night before being caught Sunday morning, he said.

“I went to a neighbor’s house and called and knocked on the window. I wanted to get in. I knew they were there, but people had been telling that I killed my little children, and they were afraid to let me in.”

Two other children of Mrs. Spicer have died, supposedly accidentally, since 1923 and Sheriff G. R. Brown said their deaths were also under investigation.

Brown said his questioning of the woman before her escape Saturday night revealed that a baby by a former marriage had been smothered in Los Angeles in 1923 by bed clothing and that a son, child of Frank Spicer, had been drowned in a well near Boulder, Colo. Both deaths were declared accidental.

FULL TEXT: Kiowa, Colo., March 28. – Mrs. Hazel Spicer, 41, ranchwoman charged with slaying her infant daughter, awaited removal today to the state hospital at Pueblo after a district court jury found her insane. She was accused of the smothering to death of her 13-months-old child, Doris, last January. The jury decided she was insane after considering the case an hour. 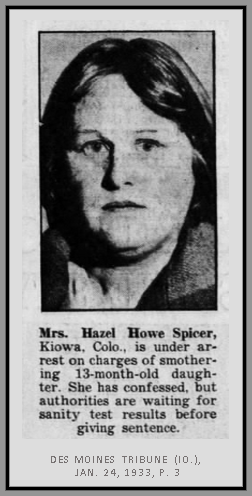 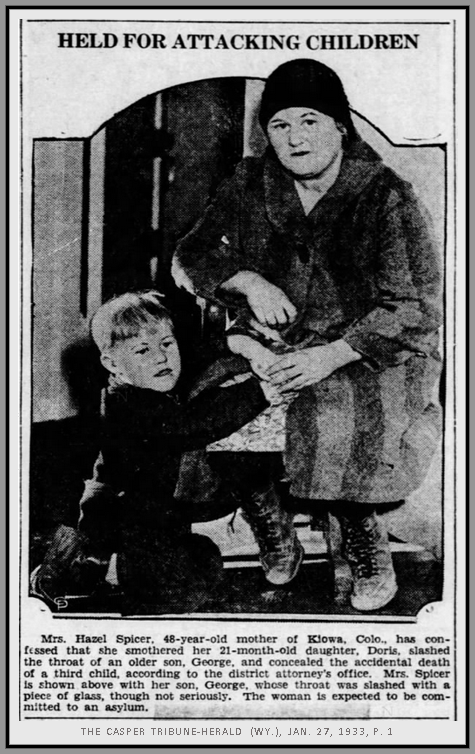 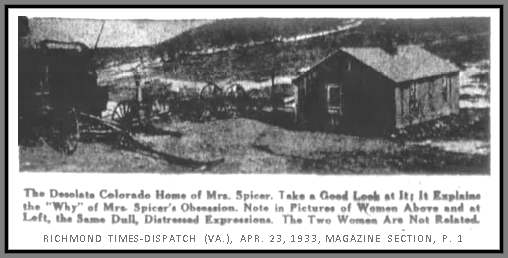 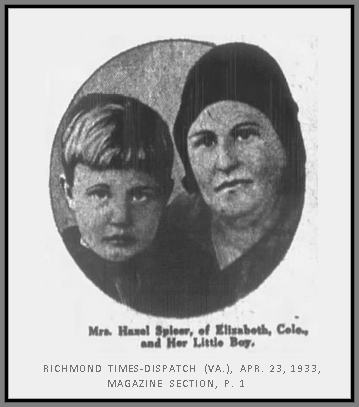