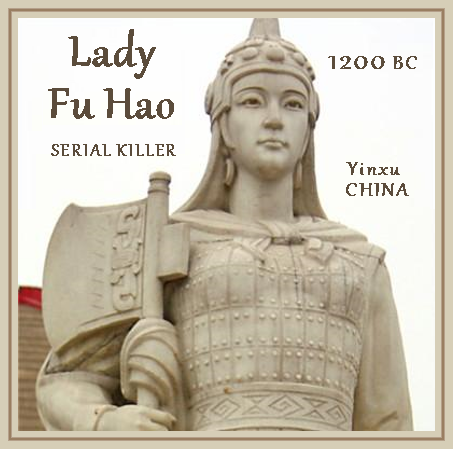 Lady Hao “was a powerful woman and military leader during the Shang Dynasty.” While she was highly respected in her role, “unfortunately, historians also suspect her of murdering four young princes who held claims to the throne.”

Wikipedia: Fu Hao (simplified Chinese: 妇好; traditional Chinese: 婦好; pinyin: Fù Hǎo; died c. 1200 BC) or Lady Hao, posthumous temple name Mu Xin (母辛), was one of the many wives of King Wu Ding of the Shang dynasty and, very unusually for China but not for that time, also served as a military general and high priestess. Minimal evidence detailing Fu Hao's life and military achievements survived the Shang Dynasty, as it preceded the invention of paper and the records may have perished over the course of time.

The Tomb of Fu Hao was unearthed intact at Yinxu by archaeologist Zheng Zhenxiang, with treasures such as bronzes and jades. Inside the pit was evidence of a wooden chamber 5 metres (16 feet) long, 3.5 metres (11 feet) wide and 1.3 metres (4.3 feet) high containing a lacquered wooden coffin that has since completely disintegrated. The tomb of Fu Hao provides the most insight into her life, her relationship with the royal family, and her military role and achievements - as the objects she was buried with provide clues to her activities and interests.

What is known is that King Wu Ding cultivated the allegiance of neighbouring tribes by marrying one woman from each of them. Fu Hao (who was believed as one of the king's 64 wives) entered the royal household through such a marriage and took advantage of the semi-matriarchal slave society to rise through the ranks to become one of the King Wu Ding's three consorts. The other two were Fu Jing (妇妌) and Fu Shi (妇嬕) Fu Jing was the primary queen while Fu Hao was the secondary queen. Fu Hao was also the mother of Prince Zu Ji (祖己). Oracle bone inscriptions show concern for her well-being at the time of the birth.

The activities of priestess and ritual matters of China only exist in the Shang dynasty, so some evidence is vague. Since each Chinese Character like Fu 妇 often has variable meanings, even with the oracle bones of Shang deciphered, it is possible that some women like Fu Hao were originally priestess instead of the King's wife; she just happened to marry to the King later. That is to say, the meaning of "wife" in some contexts may actually refer to a position as priestess.

Fu Hao owns her land. According to the oracle bones, she offered the King remarkably valuable tributes many times. Although the Shang king had control over ritual matters, which constituted the most important political activity of the day, oracle bone inscriptions show that Wu Ding repeatedly instructed Fu Hao to conduct the most special rituals and to offer sacrifices to the ancestors. The Shang Dynasty had two most important activities: ritual matters and battles; Lady Hao played extraordinary roles in both at that time.

Fu Hao is known to modern scholars mainly from inscriptions on Shang dynasty oracle bone artifacts unearthed at Yinxu. From these inscriptions and from the presence of weapons in her tomb, it can be determined that Fu Hao was a general in charge of several military campaigns for the Shang Dynasty.
In her military role, she was responsible for conquering enemies and neighbours of the Shang Dynasty. The Tu-Fang had fought against the Shang for generations until they were finally defeated by Fu Hao in a single decisive battle. Further campaigns against the neighbouring Yi, Qiang and Ba followed; the latter is particularly remembered for being the earliest recorded large-scale ambush in Chinese history. With up to 13,000 soldiers and important generals Zhi and Hou Gao serving under her, she was the most powerful Shang general of her time.

This highly unusual status is confirmed by the many weapons, including great battle-axes, unearthed in her tomb.

While Fu Hao's achievements were notable and unique, other women in this period were also active in military roles; in a similar manner Fu Jing was also thought to have served in the military based on the presence of many weapons and military equipment in her tomb. Oracle bones also revealed records of at least six hundreds of women participating in the military during this era. 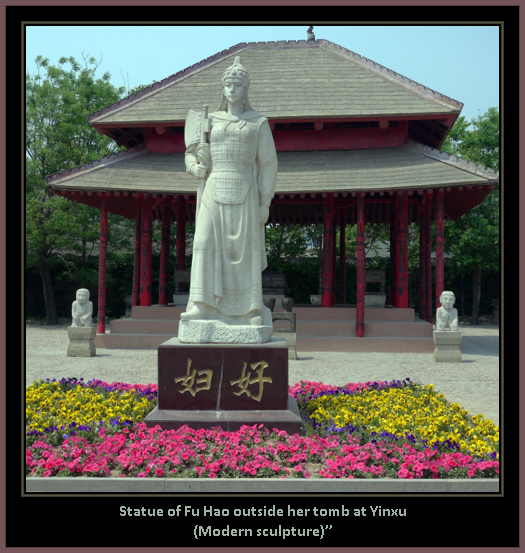