Husbandicide: A Brief Overview of Its History from 1889 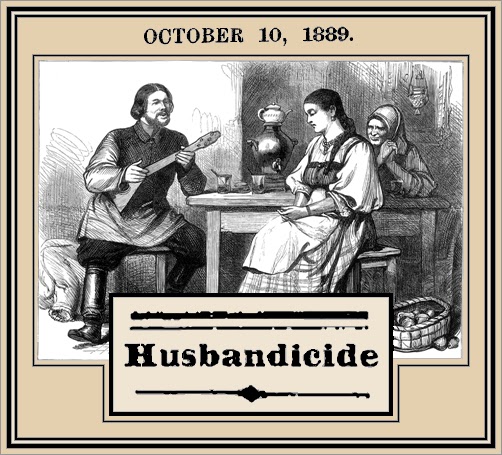 FULL TEXT: The crime of husbandicide – the word is as permissible as infanticide – is as old as the discovery, made a very long time ago, that marriage is sometimes a failure. Two thousand years ago Fabius Maximus ordered the execution of 170 women, who had leagued together for the purpose of murdering their husbands.


In the Middle Ages husband-poisoning threatened to become a popular if not a respectable institution. The inventor of the infamous Aqua Tofana [this is the name of the poison, actually: “Tofana Water”] pretended that, in enabling husbands and wives to «et quit of their troublesome partners she promoted the course of domestic harmony, and thus served a religious and conscientious purpose.

The idea, though hypocritical in its origin, got a fanatical hold of certain minds; and long after the recipe for the mysterious potion had been lost, there were poisoners who asserted the justifiable nature, if not the actual holiness of their grim profession. Less than a hundred years ago an old woman [Giovanna Bonanno] was executed at Palermo for dealing in a poisonous vinegar which she sold to any female who assured her that she had a bad husband of whom she wished to rid herself.


Husband-murder had, at one time, a special name in the vocabulary of English jurisprudence. Under the title of Petit-treason it was punished by strangulation and burning; and down to the thirtieth year of the reign of George III. this was the retribution meted out to women convicted of taking the lives of their consorts.

Poison, which effects its purpose without involving any conflict of physical force, is essentially a female weapon. This hypothesis is borne out by the French judicial statistics, which show that in twelve years there have been 260 women accused of murder by its means as against 219 men. Hence, while wives who die unnatural deaths are the victims of all kinds of violent crime, it is generally by poison that husbands met their end at the hands of their vindictive spouses.

Of course, instances are not wanting of women who have availed themselves of the brutal procedure of the other sex, such as Catherine Hayes, who in 1728 gave her husband his quietus with a hatchett and Martha Alden who used a very unfeminine billhook for the same purpose eighty years later; but, as a general rule, the lethal instrument employed in such cases is poison. For instances we need not, unfortunately, travel out of our own country. Although we have not produced a Madame de Brinvilliers, or a Margaret Zwanziger, our criminal records afford many terrible examples of woman who have resorted to poison in order to remove a distasteful or betrayed husband. Many of these are similar in their details to the sensational case just tried at Liverpool.

In 1750 considerable public interest was aroused by the trial of Amy Huchinson, who was charged with administering a fatal dose of arsenic to her husband. The accused, who was only in her eighteenth year, had married John Hutchinson out of pique at the desertion of a former and more favored lover. The latter, however, returned on the very day of the wedding and met the bridal party coming out of church. The old intimacy was soon re-established, and speedily became criminal.

It was not long before Hutchinson's jealousy was aroused, and after many quarrels, the wife one day poured a strong dose of arsenic into her husband's ale, from the effects of which he died in a few hours. Amy was convicted, and notwithstanding her youth suffered death by strangulation and burning at Ely. Fifteen years later a similar case occurred in Forfarshire.

The accused, Katherine Ogilvie, formed a guilty attachment for her husband's brother, Lieutenant Patrick Ogilvie, in the first year of her married life. The liaison was discovered, and the younger Ogilvie was forbidden the house; whereupon the wife concerted measures with her lover to poison her husband. The poison, laudanum and arsenic, was supplied by Patrick, and administered by Mrs. Ogilvie in a bowl of tea. The laird died a few hours afterwards, declaring he had got his death from his wife’s hands.

The pair were tried and convicted. Patrick was executed; but Mrs. Ogilvie, after bearing  A child, managed to elude justice by escaping, Similar circumstances were repeated in a case which came before the assizes in 1772. The wife of a gentleman of position, Mr. John Bayer, of Riddleden, Bucks, was charged, together with her paramour, named Noble, with poisoning her husband. She was acquitted; but her accomplice was convicted and executed.

Another case occurred in 1843, when a man named Dudley, of Wrestlingford, was poisoned by his wife. No suspicion of the murder was entertained until eight months after, when the body was disinterred and the poisoned – arsenic – found in it in considerable quantities.

All the cases we have mentioned are cases of arsenic poisoning; but there are instances where other toxicological agents, each has strychnine and laudanum have been employed, in 1841 a woman named Coulroy was executed in Ireland for poisoning her husband with monkshood, a poison of very great activity, acting through the blood.