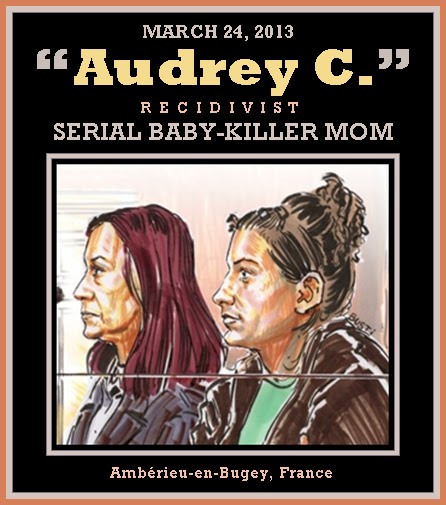 On March 24, 2013, Audrey C., a 32-year-old waitress, confessed that she killed her two babies (born in 2010 and Autumn 2011), whose corpses were found in a freezer, and declared admitted they were born alive. She has only been out of prison for about three years, having been convicted of murdering a newborn on March 28, 2002 (but not sentenced until 2005).. In that case Audrey put the dead body in a bag, then convinced her own mother, Jacqueline P. C.,  to leave the bag in a derelict building. She was originally sentenced to 15 years in prison for infanticide, while her mother received an 18-year jail sentence.

One body was found by the killer’s boyfriend in a freezer in her apartment in Ambérieu on March 24, 2013. He then called police, who found the second body in the freezer. Police say they believe the boyfriend did not live with Audrey, that he was the father of the dead babies and that he had no knowledge of their births.

November 2012 – A three-month-old boy and a five-year-old girl found dead in a refrigerator and freezer in Vieene, Isère. The mother is also found dead, while the father flees to Tunisia.

December 2011 – A 34-year-old woman is charged with voluntary homicide after her teenage daughter finds the body of a new-born boy in the apartment freezer in Vichy. The mother recognises having given birth with no assistance in her bath in 2008.

May 2011 – A 28-year-old waitress in Limoux arrested, accused of freezing her baby after giving birth alone at home.

June 2010 – A woman, 34, hands herself into police in Lasbordes and leads officers to a freezer in which she had put her baby.

June 2010 – A woman charged with voluntary homicide after a friend finds the body of her new-born baby in the mother’s freezer in Metz.

May 2009 – In Metz, a 15-year-old boy discovers the frozen corpse of a baby in his mother’s freezer. The mother is charged with neglect leading to the death of a minor.

March 2008 – A man finds the dead body of his infant grand-daughter in the freezer of a farm near Guingamp, Brittany. The girl’s mother is sentenced to eight years in prison, giving birth whilst in custody having hidden her pregnancy.

June 2007 – A baby’s body found in a freezer in a house in Foug, near Nancy. After a search at the previous occupants new house nearby, two other infants bodies are found. The mother of the three babies is charged with infanticide.

November 2006 – A 39-year-old woman from Toulouse is imprisoned after the body of a baby is found in her domestic freezer. The baby had been suffocated in 2004.

July 2006 – A Frenchman finds the bodies of two newborns in the freezer of his ex-pat home in Seoul, Korea. His wife is convicted in Tours, France a year later for infanticide, having admitted to the 1999 killing of another of her babies. Sentenced to eight years in prison in 2009, she was released in May 2009.

March 2003 – Police in Tinténiac in Brittany find the body of a new-born baby in a freezer and the remains of three other children buried in the garden of the house. The mother is later given a 15-year prison sentence.

July 2002 – A 36-year-old woman is charged after her new-born baby is discovered in a freezer at her home in Guingamp. She was sentenced to nine years in prison.

Based on: “France shocked by yet another case of dead babies found in freezers,” Euronews, Mar. 27, 2013]