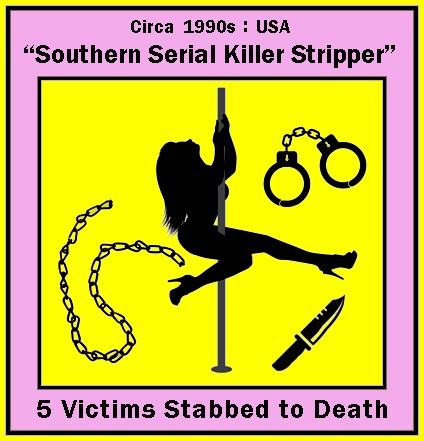 The name “Southern Serial Killer Stripper” has been coined to describe an important case of a female serial killer who name, locale and even time-period of activity remains unknown.

The source for this case is the study, consisting of interviews with incarcerated criminals conducted by Dr. Deborah Schurman-Kauflin which are included in her groundbreaking 2000 book on forensic psychology, The New Predator: Women Who Kill (Algora Publishing, New York). The case is described on pages 65 (and in table 6-4 as case #1) and 116-117. Such studies by professional scholars are almost always done with a proviso that the names of the subjects will remain unpublished. It has not been possible, thus far, to connect this case with any known one mentioned in other publications. It is possible that the subject may have been convicted of a crime or crimes without the fact that she has committed multiple homicides, thus making it difficult to match her case with any news report.

From page 65: Only one female [out of the 7 interviewed] admitted to having the desire to touch and torture her victims, and she used a knife to kill. She has admittedly a sadist who enjoyed hearing people scream. When she killed one of her female victims, she purposely held the knife over the victim’s skin before cutting her in order to see the fear in her victim’s eyes. This killer overpowered her victims and rendered them defenseless with stab wounds before selectively cutting them. Like the other females involved in this research, she did select relatively defenseless victims to begin, but she also acted to make them unable to fight back – which parallel male offenders.

From page 116: The female multiple murderer, like the male, craves domination, and the female has been even been known to sexually ravage a helpless victim as well. The sadistic female killer who I interviewed came across as charming, but then again, that is the hallmark of the serial killer. She had short brown hair and light green eyes that seemed to dance as she spoke. She had killed heterosexual males and heterosexual females.

“I would use handcuffs or chains so I could have more control or dominate them (victims) more. I don’t know any other way, and I thought everybody liked it that way. In fact I’m going to tell you something. When I first got into prostitution and started turning tricks, men would ask me to beat them. One man said I’ll give you five hundred dollars for you to beat me with this whip. I said no, I’m not going to beat you. Then I thought, for five hundred dollars, I could beat you to death, and I did. I got mad at him and got carried away. And I liked it because it let me have control, you know what I’m saying. And that’s just the way I like it. Like before I was in here (prison), if I was having sex with a trick or someone who wasn’t into it (sadism), I’d have to be in control in other ways, like being on top. I may not have gotten violent with them because there were people I couldn’t control, you know what I’m saying? I liked hurting people. It’s like an animal instinct in me.” 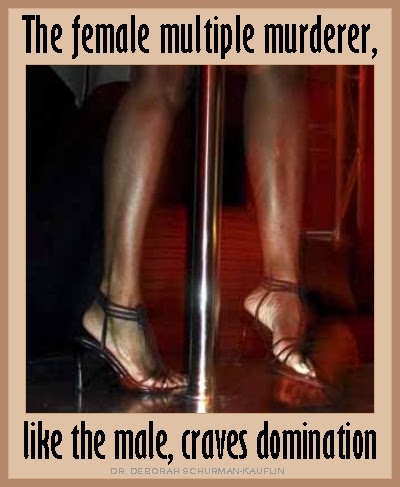