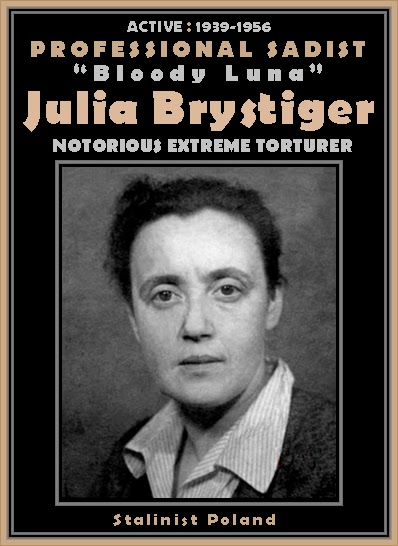 Excerpt from Wikipedia: Julia Brystiger (née Prajs, born November 25, 1902, in Stryj – died November 9, 1975, in Warsaw) was a Polish Communist activist and member of the security apparatus in Stalinist Poland. She was also known as Julia Brystygier, Bristiger, Brustiger, Briestiger, Brystygierowa, Bristigierowa, and by her nicknames – given by the victims of torture: Luna, Bloody Luna, Daria, Ksenia, and Maria. The nickname Bloody Luna was a direct reference of her Gestapo-like methods during interrogations. Her pen name was Julia Preiss.

In the Polish official archives, there is an instruction written by Brystygier to her subordinates, about the purpose of torture:

“In fact, the Polish intelligentsia as such is against the Communist system and basically, it is impossible to re-educate it. All that remains is to liquidate it. However, since we must not repeat the mistake of the Russians after the 1917 revolution, when all intelligentsia members were exterminated, and the country did not develop correctly afterwards, we have to create such a system of terror and pressure that the members of the intelligentsia would not dare to be politically active.” [Czeslaw Leopold and Krzysztof Lechicki, Political Prisoners in Poland 1945-1956, Mloda Polska, Gdańsk, page 20.]

Brystiger personally oversaw the first stages of each UB investigation at her place of employment. She would torture the captured persons using her own methods such as whipping male victims’ genitals.