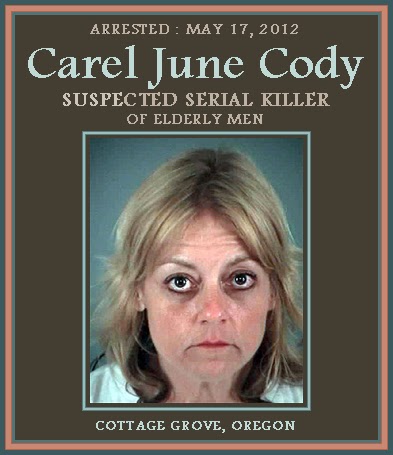 Four elderly men died under the care of Carel June Cody in her foster home in Cottage Grove, Oregon. It is suspected that she murdered them. It is, however, definitely known that she physically abused and publicly berate them and that in the case of the most recent death she made the man, John Arnold, her insurance beneficiary and after he died in 1995 disposed of his body secretly so she could collect his Social Security benefits. His body has not been found.

“Cody obtained her caregiver license in 1988 and, four years later, was reprimanded for alleged financial exploitation of clients. Less than two weeks later, the state restricted her permit to operate an adult foster home. At the home in the mid-1990s, neighbors noticed something amiss. Cody was handling the residents roughly, the neighbors told investigators, raising her voice so loud she could be heard across the street. An elderly man suffered a broken shoulder that he said went untreated for nearly one month. People who were staying at her home accused her of pushing them into household objects, verbally abusing them and – going against her own no-pet policy – allowing her pet monkey free reign in the house.”

On May 17, 2012, Cody, 46, was arrested and charged  with stealing more than $200,000 in retirement benefits from John Arnold. On May 23, the  U.S. Attorney’s Office charged in a memo“that Cody has been linked to at least three suspicious deaths beyond that of John Arnold.”

Prosecutors were unable to obtain sufficient evidence to try her on homicide charges in any of the four deaths of her clients.

“On July 30, 2013, Carel June Cody, 47, of Cottage Grove, was sentenced to 57 months in prison for her theft of Social Security benefits that spanned more than 16 years.  In addition to prison, Cody was ordered to pay restitution in the amount of $203,528. Cody has also agreed to relinquish her federal Thrift Savings Plan retirement fund, worth approximately $36,000, to the government as well as her Cottage Grove residence.” 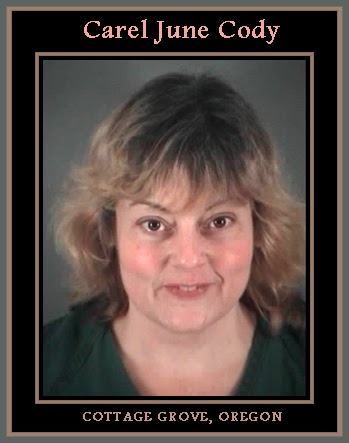