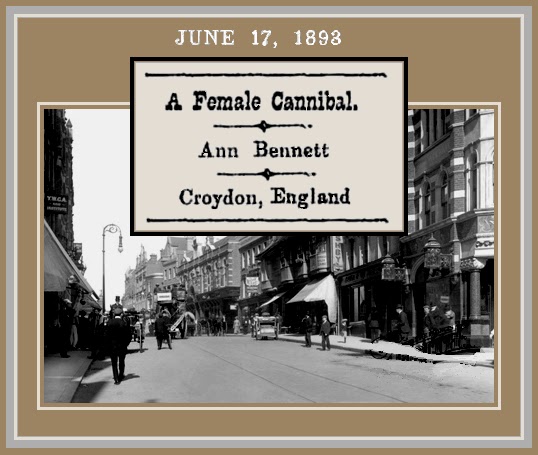 FULL TEXT: At Croydon, on May 2nd, Ann Bennett, a middle-aged woman, whoso eyes were dreadfully discoloured, was charged with assaulting Emma Lock by biting her on the face and hand. Lock, an elderly woman, stated that Bennett lodged in her son’s house in Leighton-street. She was taking tea with her son and his wife, when Bennett entered the room. Witness’s son resented the intrusion, and asked the woman to leave, whereupon she dealt him a violent blow in the mouth, making it bleed. She then, hit witness on the face, causing blood to spurt over the table from her nose and mouth. She also pulled her down on the floor, knelt on her chest, and bit her face and “tore all the flesh off her knuckles with her teeth.” “Witness really believed she would have been bitten to pieces had not her son interfered. Two months’ hard labour was the sentence.