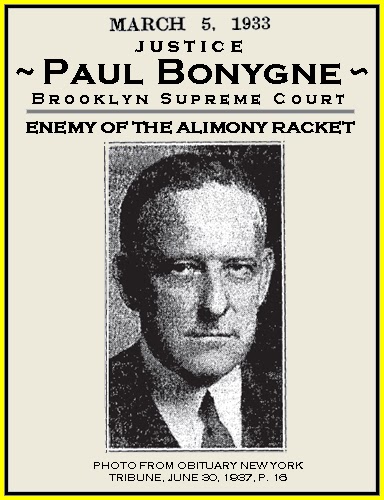 FULL TEXT (Article 1 of 2): Justice Paul Bonygne of the Supreme Court, who has released three “alimony martyrs” from Brooklyn Raymond Street jail these last days, is no pioneer in the growing movement against “throwing men into jail for civil debt.” His sharp and pungent assaults on a system that is a futile as it is pernicious and obsolete, are nevertheless contributions to the cause that are not likely to be overlooked. The fact that this peppery jurist has indulged in rash generalizations about “waspish women,” and thereby focus on himself a good deal of just feminine resentment, does not detract from the publicity value of his comment on the cases of Fives, Politano, Tobe and Baer.

It is, of course, a great service to the movement for the abolition of the absurd and expensive “alimony clubs,” with which the local jails are crowded, to have a Supreme Court justice denounce a statute law which makes it possible for a spiteful woman, a ruthless lawyer and an indifferent judge to send a penniless man to jail without a trial because of his non-payment of a civil debt and to keep him there at public expense until the woman involved no longer feels that the indulgence of her pique is worth a lawyer’s fees. It is of still greater value, however, for a justice to demonstrate that such disposition of these cases is not a mandatory upon our judges under Section 1172 of the civil practice act as it now stands, but that many of this law’s victims are in jail because their judges have found the satisfaction of the plaintiffs the easiest and quickest way to clear the calendar of such cases.

This act provides that if a husband defaults on his alimony payments, and if he has no property to sequester and no security on which the courts can foreclose, the court may ask the delinquent to show why he should not be punished. If the husband’s explanations do not satisfy the judge, or if they seem in doubt and call for a protracted inquiry, the judge may make summary disposition of a vexatious piece of business by finding the delinquent guilty of contempt and by putting him in jail. By such whimsical decisions as Justice Bonygne’s order to Jeremiah Fives to pay $515 in forty-two years, or his demand upon Harry Baer for $1 a month on his back alimony account, he is showing how much this statute leaves to the discretion of the court. At the same time the scores of cases of utterly useless imprisonment of men without jobs or property that have come up in the daily news within the last year show how carelessly this discretion has been exercised and how urgent is the need for its revision.

FULL TEXT  (Article 2 of 2): New York, N. Y. – Supreme Court Justice Boynge [sic], asserting that "the time is past when we should throw men into jail for civil debts," fined an alimony delinquent $515, but gave him 43 years and 11 months in which to pay it.

The fine represents the arrears owed by Jeremiah Fives to his wife, Margaret, under a separation order.

Fives is 63 and afflicted with paralysis. His wife is 25 years younger.