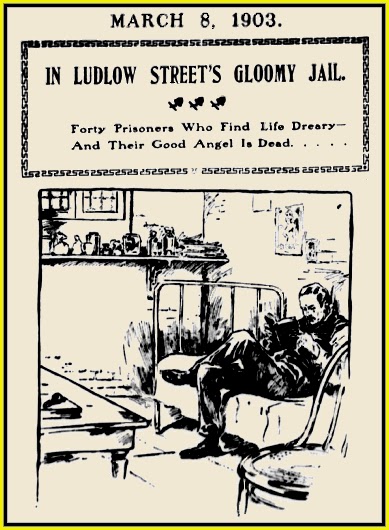 FULL TEXT: When the good woman of Ludlow street died last week the debtors in the county prison mourned. Two score of there are victims of their own mistakes or the vengeance of their ex-wives The warden’s wife, Mrs. Sullivan was a woman with a big heart. Her acquaintance with the prisoners consisted only of seeing them at exercise. In the hollow square made by old Ludlow’s walls. Sometimes prisoners fell ill and she sent dishes from her kitchen to them Now that there is no woman in the jail they miss the sight of her moving about in her dining room the windows of look out on the court

One-fourth of the civil prisoners there have found  that there is one woman too many for comfort in their worlds. These are the five alimony prisoners locked up because they have failed to pay the weekly or monthly allowance which the court has fixed for their divorced wives.

Each of the five subject to three months’ imprisonment. Then he may go free. It happens that the alimony due from each of the five is under $500. If it was more than that sum he could be kept in custody for six months

The debts for which a man may be put in prison for a limited period now may be classed as follows:

For alimony due being adjudged in con tempt of court for not having paid it.

For breach of promise, of a debt of honor which has so often been paid by a wedding in court of Ludlow Street Jail.

For wages to a domestic servant.

For fines imposed by National Guard on its members.

These five classes of debtors constitute the little colony which occupies the cells set aside for civil prisoners in Warden Sullivan’s gloomy household. 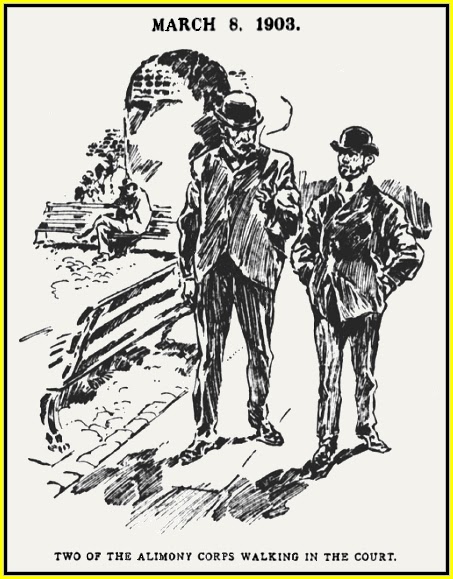 Most of the prisoners remain in jail because they cannot got bail demanded or pay the judgments them. Some really can pay but have sequestrated their property and are content to stay out the time of their important as a matter of spite or obstinacy. Serving the period of imprisonment does not release their property from the execution that stands against it but a man cannot be made to serve more than six months at the outside for a debt if an ex-wife waits until the alimony exceeds $500 she can imprison her former husband for six months. If the amount be under $500 she can only put him away for three months.

The life of the civil prisoner differs from that of prisoners accused or convicted of crimes They are expected to pay for their own sustenance if they are able. In order to get his meals at the expense of the county the civil prisoner must make affidavit that he is unable to support himself during his imprisonment. If he has money of his own or his friends have some at his command he may have as many luxuries as he wants to buy; that is everything but liquor. The law says that only cider and that quality of beer called table beer may be brought into a jail for the use of a person confined therein, unless on the prescription of a physician who declares that other liquor is necessary to the health of the prisoner.

All the civil prisoners now in Ludlow Street Jail are county fed. They have made oath that they cannot support themselves, and just now the jail has not a single star boarder of the type it has held to often. But they have some luxuries bought with money sent to them by friends. Jars of preserves and jellies are found in some of the cells. One of the prisoners is very fond of potted chicken and always has several cans of it. Another has a friend who indulges his taste in good cigars and keeps the Havana article in hermetically sealed jars, in which the cigars retain their moisture and freshness. 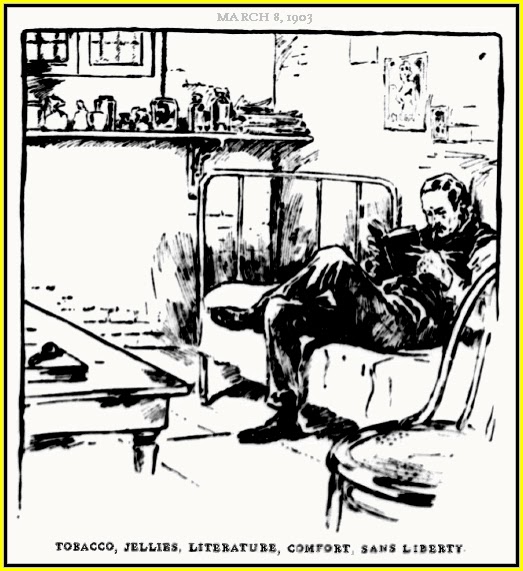 Selling liquor to the civil prisoners was common not so long ago. The saloon-keeper who did the bulk of the business made a very clear trail for the officials to follow when they discovered what was going on. For advertising purposes this saloonkeeper had his name blown into the glass of the flasks which he supplied to the prisoners. When the cells were ransacked all those bottles were witnesses against him. At present the rule against liquor is strictly enforced. A conviction of permitting it to be smuggled in would be equivalent to the forfeiture of the Sheriff’s office.

The dean of the prisoners’ corps at present is William Real de Krafft, who has been there since there since June 20, 1903. He is an exceptional case. The action against him has not been brought to trial. As a charge of fraud is involved in the civil suit he was required to give ball for his appearance The bond was fixed at $1,000 but he has been unable to get it and has stayed in custody. If judgment should be taken against him in the action he can be kept in jail for not more than six months. Krafft is 62 years old. He wants to get his case to trial oven if he loses it,  because that will limit the time of the imprisonment. The plaintiff is Otto F. Besse of Jersey City who says he entrusted $50 to Krafft to invest in stocks for him.

Mr. Krafft tried to get out a while ago and made a letter which he got from the plaintiff the basis of an appeal to the court. Mr. Besse’s niece was about to be married and he sent an invitation to Krafft. Krafft was hurt at this method of exulting over his loss of liberty. But he didn’t succeed in winning the decision of the court. 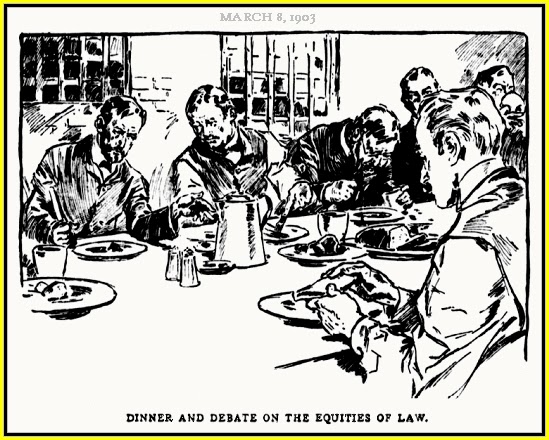 Krafft is chairman of the committee which welcomes newcomers to the prison. The alimony crew flock by themselves, as they have common sympathy to exchange.  Vincenzo Golletti is the senior of three. He has been in since Dec. for falling to pay $120. Then came William J. Shaw to join the colony row Years was just over when William T. Mealy arrived Paul A. Perry came next. The latest arrival was John W. Ball who has in just a month.

Of those are in because of executions unsatisfied by their property and for which there are E. Cosgrove has the largest sum against his name. He is related to an influential Tammany politician but an the judgment was for a $15,000 was demanded and in lieu of it  He is serving six months. He’ll get out time for the Saratoga season.

A slender boy of 22, who is raising a black beard during confinement is James A Garfield a nephew of the late President Garfield a fortune. One of his transactions with Benjamin L. Turner resulted in an execution against him for $2,500. Friends have been to get him out. If they do not succeed he will not be liberated until Aug. 17.

The soldiers might called transient guests are usually out in three days at the longest arrests am to failure to fine imposed for delinquencies. Last week Warden Sullivan entertained two soldiers from the Ninth Regiment and one from the Twelfth.

In former administrations it was extraordinary for the star boarders who could afford to pay their way to eat at the warden’s table. The rate of board was pretty big sometimes, the prisoners was mulcted for all he could pay. Amendments to the code and a stricter enforcement of rules have done away with the table. A warden may not charge any fee for sending for food which a self-supporting prisoner may want. 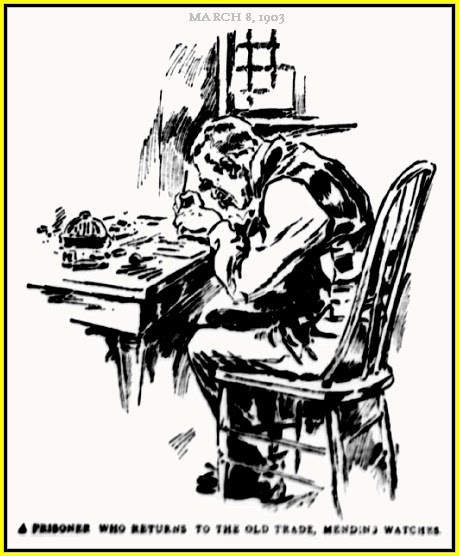